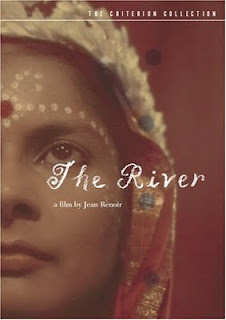 When in India, I saw (via You Tube) Jean Renoir’s The River. Jean was the son of the famous Impressionist painter Pierre-Auguste Renoir and wrote a marvelous memoir about his father. He was a well known film maker and though I do not agree with some overenthusiastic fans who feel he is one of the greatest ever, he did make some lovely films. His career started in the thirties of the last century when he directed several silent movies before he moved into the world of sound as many others did. He fled to the USA at the outbreak of the Second World War and the first movie that he made after the war was “The River” which he shot in and around Calcutta in the late forties. This movie is important for another reason. One of his assistant directors was a certain Satyajit Ray who was influenced by him to take up a career in cinema. Several others who became famous in their own right such as Bansi Chandragupta and Subrata Mitra also worked in this film.
The movie is based on a novel by Rumer Godden who also collaborated on the screenplay. It revolves round a family, an English family who live in one of the Jute Mills which bordered the Hooghly. Most of the Jute mills, which were an important part of Calcutta’s and Bengal’s prosperity, fell on hard days after Partition and now most have closed down, though some still exist though shorn of their earlier glamour. The family lives in their closed compound, though India and more particularly the River (Hooghly) do form a part of their lives, they are mostly segregated from the India of the Independence struggle which was raging at the time when the film is placed. The eldest daughter of the house, who is the narrator of the film (Harriet) falls in love with a visiting American ex soldier who has lost one leg in the War. She has a rival in one of their closest friends who is more sophisticated and more likely to be attractive to an older man. One of their neighbors had married an Indian lady and his daughter is now grown, educated like an European, but in a dilemma regarding her world and how she will fit in. Tragedy enters when the small brother of the protagonist dies when he is bitten by a snake that he is trying to tame.
John, the soldier, leaves and writes to all the three girls who were fond of him. However the arrival of the letters coincides with the birth of Harriet’s sister and the letters are forgotten in the excitement of the birth of the new baby.

The movie is slow moving, it utlises Indian or more specifically Bengali cultural motifs, perhaps to emphasise its exotic setting. The River is always there in the background, flowing in its own rhythm not caring about the concerns of men. Shades of Nehru’s “ever flowing, ever-changing, yet ever the same Ganga”. The photography is excellent. This was one of the first movies in shot in India with Technicolor and it has been utilized beautifully. I was particularly impressed by the first scene. When the movie opens an alpona is being drawn on the floor of a mud hut. We have seen so many such alponas drawn and they are still drawn during the Pujas and marriages in all houses in Bengal. The camera lovingly captures its nuances and to even me, it seems to be an exotic art. I am sure it must have seemed very exotic to his Western audiences.

The movie was awarded at the Venice Film festival ,and well it might, as it is a superb coming to age story understated and woven inextricably with the Bengal countryside , its cultural and seasonal rhythms and of course the mighty Hooghly river. Martin Scorsese has described it as one of the two most beautiful colour films ever made and the first film to introduce him to a foreign culture. High praise indeed!
I loved it!
Renoir review River