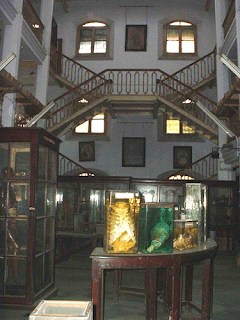 y-axis! said…
lovely post. anatomy, sadly, never intrigued me... i came with a set mind to become a doctor to treat patinets alone, it didnt sink in at that point how pre and para clinicals would be necessary. Now things are different though, i do read the relevant anatomy and imbibe it.
January 30, 2010 at 2:02 AM

Ye Waqt Guzar Jaega... said…
firstly..i would like to ask you did you come for the reunion this time?
secondly..it is a nice post..let me tell you sir, its nice to know that CMC still retains a bit of your post..like the pattern of exam(items & parts..however dreadful they may be!!), Pan & Basak exam,dissection classes...things that have changed are that we have stopped reading Gray & the course a bit...
February 6, 2010 at 3:25 AM

Nipon said…
Awesome is the word! With posts like these, your blog is gradually turning into a goldmine.

Anatomy was interesting yet very challenging. At NBMC, we were lucky enough to have the Dr. Samar Deb, who was like a legendary figure, as our anatomy HOD. In his time, we gave the items with the seriousness of a prof exam! Now that he has retired, we hear Anatomy dept has lost much of its sheen.

We don't read Gray's anymore. But there is no denying the fact that Anatomy is the 'pillar of medical science'. We feel our anatomical knowledge put to test everyday in the wards today!
February 7, 2010 at 2:22 PM

littleindian said…
Was there not two Pan medals? For I remember Swapan Biswas was the junior Pan.

Indranil Khan said…
Wonderful post.. and thanks niponda.. you are right about praising Dr. Samar Deb. Fortunately, we were the last batch under Dr.Deb and i was his favorite.. really miss him!.. i wish NBMC once again sees the light of the 'living legend of anatomy'..
October 7, 2010 at 4:30 PM

Pranab said…
Such an awesome post. Never thought I would be romanticizing the traumatic days of Anatomy! :) Anyways... now, with less than a year to deal with Anatomy, all we care about it to mug it hard enough to scrape by the exams. I realized during my PG preps that my Anatomy knowledge was poor to the extent of being extinct, except for the clinical bits and pieces which aren't asked in exams anyways. I am strongly of the opinion that Anatomy should be a 4/5 semester subject.
May 29, 2012 at 2:08 PM