Tribute to a Forgotten Pioneer. 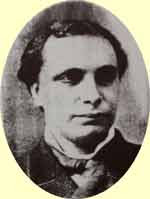 The first use of the term essential hypertension used to describe hypertension without any definite cause is usually attributed to the French physician Huchard, Viennese von Basch or to Englishman Albutt. However it is little known that this condition as well as its natural history was described much earlier by a physician of mixed Indian and Irish origin, Frederick Akbar Mohamad. Son of a man who ran a fencing and boxing academy near Brighton, he was the grandson of the famous Dean Mahomet. Dean (probably a corruption of Deen) was born a a couple of years after Plassey in Patna in a minor nobleman’s family. He became a part of the East India Company army and attached himself to Godfrey Evan Baker who later brought him to England. Dean eloped with an Irish lady Jane Daly and became famous for setting up a shampooing establishment in Brighton . Shampooing in those days meant a sort of spa treatment including massages and diet regulations. He became quite famous in this and later was credited with having started the first ever curry takeaway in Britain, the fore runner, if you like of the chicken tikka revolution in the UK. He also wrote the first ever book written in English by an Indian. Perhaps I might write in a later post about the granddad, but today I intend to concentrate on the exploits of the grandson.
Akbar was as a child, excitable, passionate and fond of mechanical toys. He joined the Sussex County Hospital to learn medicine and was later transferred from there to Guy’s Hospital in London in 1989 when he was twenty years of age. He was a brilliant student and won all manner of prizes including the Pupil’s Physical Society prize for his work on improving the sphygmogram. He later was appointed to the London Fever Hospital where he became the student of the famous William Broadbent who was in addition to being the Physican to Queen Victoria, one of the foremost teachers of his day. He was elected to the MRCP in 1874 and received a University of Brussels MD in the same year. He later worked for a second MD from Cambridge, commuting from London in order to continue study while keeping up his post in London. He was also elected FRCP in 1880. In 1881, he joined his alma mater as an Assistant Physician. He was a keen researcher and published his first paper as a student. Subsequently he wrote at least 11 major papers in which he clearly described the natural history of essential hypertension and also very clearly identified the pathological features of kidney disease with hypertension and its manifestations. He was also instrumental is showing that not all hypertension was due to kidney disease but there was a subsection that had no definite cause. It is unfortunate that he did not get proper recognition for his undoubtedly pioneering work.
As one writer has put it: “He described the constitutional predisposition to essential hypertension and its tendency to run in families. At a time when tuberculosis was considered to have a constitutional predisposition, he used multiple photographic portraits to present a contrary opinion. He made a major contribution to the surgical management of appendicitis and was one of the first to use direct blood transfusions in humans. He described a syphilitic causation of thoracic aortic aneurysms. His last contribution was the precursor of modern cooperative clinical trials. He successfully proposed development of a Collective Investigation Record by the British Medical Association to prepare information on morbidity and mortality of diseases seen by physicians practicing outside hospitals.” His description of the pulse and its changes during the aging process was surprisingly modern.

Akbar Mohamad died in 1884 at the young age of 35 of Typhoid fever. He contracted this fever at the Fever Hospital to which he was still attached as a consultant and was looked after during his fatal illness by his old teacher Broadbent. His death prevented him from reaching to even greater heights. He was buried at the Highgate cemetery in London.
Akbar Mohamad Dean Mahomet Health