The Annapurna Circuit and Related Matters. 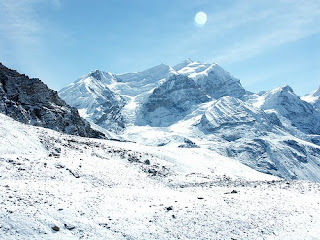 In the Puja holidays of 1999, I together with my inseparable comrades during my mountain trekking expeditions, Swapan Chakrabarty, Subrata Chowdhury , the late Asit Bose and three others completed the Annapurna Circuit. It was one of the finest walks that I have ever undertaken and I have walked many trails in my time. The walk started in Besisahar, a few kilometers short of Pokhara on the main highway to Pokhara from Narayanghat or from Kathmandu and then it took 14 days to complete the circuit, the high point of which was the crossing of the Thorang La ( 5416 meters) to descend to Muktinath and then to Jomsom along the gorge of the Kali Gandaki.
The walk was strenuous, but not unduly so, the stages were manageable as we slowly vended our way up some of the finest mountain scenery in the world. It is possible to see the entire Annapurna range, as well as the Dhaulagiri, and the Macchapuchare. This was when I was still working at the NRS Medical College , but this journey was to change my life.
In Jomsom, I realized that since the walk had taken a couple of days more than I had previously anticipated, it would be necessary for me to take a plane to Pokhara if I was to get back in time for my joining date. It was difficult to get a ticket, the planes there are always packed, but fortunately (for me) the wife of the local representative of the Royal Nepal Airlines fell ill and I saw her and prescribed some medicine which I could dispense form our stock. The grateful official provided me with a ticket in the next day’s flight. In the airport I met Dr Amitabha Basu, Pathologist, at present working in the West Indies.
Amitabha was then working in the MCOMS Pokhara and he took me to see the college as well as the Principal Dr Nagra. I fell in love with it at first sight and next year my wife Susmita and I joined there to spend what have been the happiest years of our lives. I am a trifle boring while raving on the topic of Pokhara, so I will not say anything further, but I still thank the god in whom I don’t believe for making Amitabha and me cross paths. It has changed my life forever. I still have nightmares when I wake up imagining I am still in the West Bengal Medical Education service, surrounded by the dirtiest wards in existence, the surliest and most incompetent nurses and the ubiquitous minions of the Coordination Committee of West Bengal State employees. Thank you so much Amitabha.
Be that as it may all this was triggered off by a news I read recently that a motorable road is now being built to Manang , thereby reducing the need to walk by more than a week. It will now be possible to reach the Thorang La in two days walk. The BBC article where I read this bemoaned this development. It has been claimed that it will put so many people dependent on the tourist traffic out of business and how it will spoil the pristine area that we used to trek thorough in the past.
I cannot deny that I too felt a pang of dismay at the thought of jeeps roaring past those beautiful hamlets where we spent so many nights, gazing up at the brightest stars on earth. But I do not subscribe to the Western notion that the Nepalese hill people will have to subsist on a very seasonal traffic which might be cut off at the whiff of any disturbance at the other end of Nepal. I see no reason why the denizens of these mountain hamlets should not aspire to send their children to schools in the Valleys below, or reach there faster for medical treatment. However roads often mean the destruction of the environment in a large scale. This must be guarded against, but to stop the development process is like trying to ask the tide to return.
However I am glad that I did the Annapurna Circuit when I did, maybe if any of you have plans; rush before it is too late. For those who could never have walked for 250 km in that terrain, wait a while, you will be able to make it with much less effort very soon!

Anonymous said…
It is great to know that you have found such love, happiness and success in life. But you are insulting lots of fellow professionals by making such snide remarks and sweeping comments.
June 17, 2011 at 5:20 PM

trekking in Pakistan said…
That place is perfect for trekking and according to adventure tour offers its affordable.
December 17, 2012 at 1:48 PM