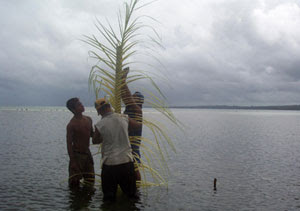 Most societies which are dependent on the bounty of nature for their survival have community based systems which preserve these natural resources. The Eastern islands of Indonesia, particularly the Makalu group of islands (1029 in number) have such a community management system for natural resources. This is the practice of sasi, a traditional system that has protected the fish, coconuts and other natural sources from times immemorial.

Sasi can be loosely described as a prohibition on the harvesting of certain natural resources in an effort to protect the quality and population of such resources whether it is plant or animal. It is also an effort to maintain the social structure of the society by equally distributing among all local inhabitants the benefits from the surrounding natural resources.
In this system, the tribal elders regulate the use of natural resources. The rules of sasi are decided at a meeting of the village council. Members of the clan who will enforce the sasi are chosen , they are the kewang who are empowered to implement the sasi rules. The kewang are also responsible for punishing or disciplining citizens violating these rules.
This practice consists of a set of ritual prohibitions to harvest resources doing the period of sasi. This prohibition, interestingly, is placed not only on the shared resources of the community, but could also be placed on the person’s personal property. Thus, if sasi is in place, one cannot even pluck the coconuts from one’s own plantation.

As one account has it “ During the imposition of sasi, the rightful landlord is permitted to enter his own garden in order to clean up the grounds and to gather the already fallen coconuts. He must take them to the village marketplace where they are branded and stamped with the sign of his clan group and stockpiled”.

A similar prohibition was placed, on occasion, on the sea and its resources. During the sasi period the clan members were prohibited from fishing in certain areas for some periods of the year. This was particularly used during the periods when tuna and lomba fish (a type of sardine) yearly returned to the mouths of rivers in April and May every year. A branch is placed on the reef that the fish frequent to signal the prohibition. When the fish have all swum into the reefs, the sasi is lifted and communal fishing parties now can partake of the bounty of the seas. In recent years, sasi has also prohibited the use of fine nets to protect hatchlings. The ritual chant was used to signal the start of the sasi period and the ending was often indicated by the beating of drums.

This system was rigorously, and one might say pretty ruthlessly, implemented. If the owner violated sasi on his own land, he was fined, but if someone had the temerity to steal from a neighbor’s land during this time, he was stripped and made to walk all over the village, accompanied by drummers and a gaggle of children and had to keep calling out “ Don’t steal like me” while he walked. It is little wonder that sasi was seldom defied.

In recent times, however, the practice has lost ground. As population increases and pressures on the land and sea increase, the elders are forced to open sasi more and more often, thus the main purpose of sasi which was to allow the natural world time to recover from the depredation of man, is lost. In fact in recent times, the practice is in danger of being completely abandoned. The results are likely to be devastating for nature and will probably result in the end of a way of life that has endured for centuries .

I am indebted for some of the information here to Charles Zerner’s chapter in Nature and Orient, (OUP, Delhi, 1998)
conservation of natural resources. sasi traditional prohibitions