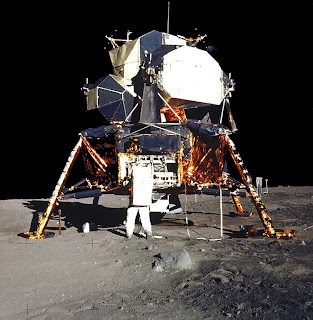 The sixties were the heyday of technological change and progress. This statement may sound heretical as we today live in an age of technology, of instant communication and change. But it was in the sixties that human beings first walked the moon and have never walked on it since (though the last moonwalk was in the early seventies.) It was in the sixties that the airplane that flew twice the speed of those flying even today came into being (the Concorde) and it was then that one began to dream of Mars landings and of thinking computers and robots that would be indistinguishable from men.
In the sixties, one confidently expected to see flying cars, transplanetary travel and humanoid robots by the turn of the century. These were not just the pipedreams of individuals like starry eyed youngsters like me, but also the carefully considered opinion of analysts who tried to predict the future. But alas the twentieth century is already more than a decade old and these wonders have yet to come to pass and perhaps will not in even the next fifty years.

Why is this? Was it because the cold war in the sixties became a competitive flight to the moon? A perceptive observer has suggested that this may have been because both the Soviet Union and the USA were both basically frontier societies, their national imagination was shaped by the conquest of he West (for America) and Siberia (for the Russians) . That was why in those days, the sky appeared to have no limits and all of us dreamt of reaching the planets.

The Soviet Union was the home of imaginative plans. Stalin may have been a monster, but he did raise a peasant society by its bootstraps from the eighteenth century to the twentieth in just two decades, delivering, one must not forget, more than 10% growth every year. No wonder he was deified by poor people all over the world. The dreams of the stodgy looking Soviet politbureau were also grandiose. Some of them may have been crazy and left the Central Asian republics in the throes of an environmental disaster, but one cannot but admire the vision of the man who thought of turning the Central Asian deserts into a granary by diverting the waters of the Syr Darya and Amu Darya rivers. There were others. These included a scheme of growing edible spirulina in all waterbodies to eradicate hunger and one to launch thousands of solar panels into space to harvest solar energy which would then be beamed back to earth.

Today’s technological dreams are puny by comparison. There are no dreamers who would use a good vantage point to shift the world as Aristotle promised to do. In today’s risk averse world, there would never have been a Panama Canal or Suez Canal, certainly there would have been no race to the moon. Nobody would have dreamt of taming the Damodar or the Tennessee River and nuclear energy would be unexplored.

Today’s technological dreams seem to lack vision. There is no grandness in their conception and obviously there is little splendor in their execution. What romance can you find in an attempt to set up tiny solar panels in some households or of disliking a politician on Facebook? Though, I am sure you might think that these solutions are sensible, green and cost effective. But what about the romance?