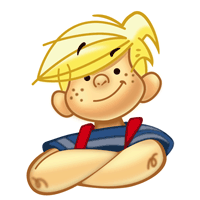 One remembers many friends from the schooldays. Not flesh and blood friends, but those that we met in the pages of comic books. They became part of our childhood and one or two of them have remained with us to this day. We Bengali children had Batul the great, and Nontey Phontey who were great favourites. But in the more cosmospolitan atmosphere where we were brought up, American comic book characters ruled the roost. Casper the friendly Ghost, the Archie family and of course Superman and Batman , who have now received afresh lease of life because of the movie franchises were some of the favorites. However none of them have remained my close friend as has the five year old from Elm Street, Wichita Kansas. I speak of course of Dennis the Menace.
In our school life we knew of two Denises. One was the one from America, but occasionally we also came across his British counterpart, Dennis with his dog, the Gnasher. However his exploits never tugged the heartstrings the way The American Dennis did and in any case British comic books became more an more difficult to get and the British Dennis has faded from memory. He has however, I am told, completed his 60th birthday recently, thus proving his popularity at least in the home market, even if he has lost the colonies. 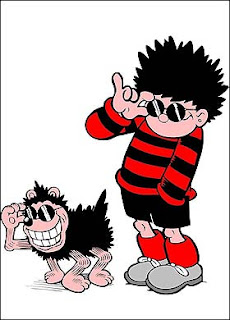 Dennis was created by Hank Ketcham. Ketcham came from a well known family in the state of Washington ( his grandfather was twice been an unsuccessful presidential candidate). He was attracted to animation in his youth and went to work for Walt Disney as an animator in the thirties of the last century. It was while living in California after he second world war that he conceived the character. It is said that the idea came from his wife who complained about their then 4 year old son, calling him a menace. Dennis Kethcam, his son, was immortalized as Dennis the Menace.
The cartoons were and are immensely popular over six decades . I cannot recall any difference in the drawings , but if you look at the official website www.dennisthemenace.com you will see that Dennis has changed subtly over the decades. His age has remained the same: five and a half. He apparently turns 6 every 14 March, his designated birthday , set to coincide with his creator’s and then immediately reverts to his five and half status the next day.
He moved to Europe for more than fifteen years but maintained the comic strip’s all American Ccharacter. This continued when he moved back to the US, though sadly, he was estranged from his son who started the whole thing off. He retired from drawing the strip in the nineties (1994) and his assistants Marcus Hamilton and Ron Ferdinand continued to draw the strips and have continued to do so after his death. Thus Dennis the Menace lives on even after his creator’s death. 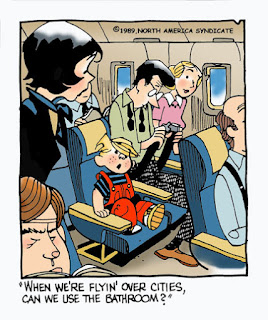 The cartoon appears in over 1000 newspapers in 48 countries and has been a favourite of many (including me) who belong to a completely different culture because of the universality of the character that Ketcham created.
This popularity is also because of the superb set of supporting characters that Ketcham created. His parents Alice and Henry, Mr Wilson and Mrs Wilson the long suffering next door neighbours and his friends Joey, Margaret and Gina have distinctive characters which add to the fun. On visiting the official website, I learn that MR Wilson was a postman, his mum met his father in the office of a finance company when he went to pay his car repayment cheque and that Alice was a Miss Johnson before she married.
The values and the situations that Dennis lived through were not very similar to ours; he was American, blonde and the typical suburban child, far removed from our experience. But he struck a chord, not only for his antics which were universally comprehensible, but also because of the superb draughtmanship of his creator who brought him to life and into our hearts where he has remained ever since.
I hope that he will remain the same naughty, loveable five year old until many more generations are old enough to enjoy him. In a world of complexities, Dennis remains an old friend and is always good for a hearty, uncomplicated laugh. Thank you Hank.

Malaysia Visa Agent said…
Hey, all the Blogs are very informative for the people who visit this blog. Good work! We also have a site by name Windows Malaysia which covers Best Entri Visa for Malaysia. Please feel free to visit our site.Malaysia Visit Visa
Thank you for sharing.