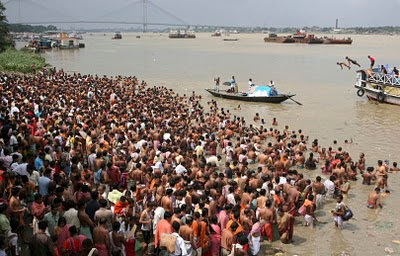 Mahalaya always brings with it the promise of the Durga Puja to follow less than a week away. There are many religious connotations to this day. It is the day given over for prayers for ancestors and there are many who crowd the Hooghly in Calcutta to bathe and offer the necessary prayers. However for us, in our younger days, Mahalaya meant the onset of the Pujas. And this was always heralded by the early morning Mahisasurmardini programme in All India Radio.
There are many programmes that have the signature of AIR Calcutta, but this particular one is one that is perhaps the most popular and has lasted the longest. I am told that the programme originated in 1932. In the first few decades it was a live programme that was anchored by the legendary Birendra Krishna Bhadra. When we were kids it was rumoured that Birendra Krishna used to bathe in the Hooghly at 3 AM and then walk to the AIR studios to start the programme at 4.00 AM. Ever since I can remember, my father used to switch on the radio and then wake us up. In my memories it used to be cool then, Sarat (autumn) had already arrived with its “himer parash” and we used to snuggle under the bedclothes and listen, drifting in and out of sleep. I cannot remember ever having been wide awake when I heard the programme. Snatches of Birendra Krishna’s sonorous rendering of the Chandipath and the songs that were interspersed them were heard in a sleepy fog. We only came awake when he began his incomparable “ Ya Devi Sarvabhutesu” . This used to evoke Pujas as nothing else can. 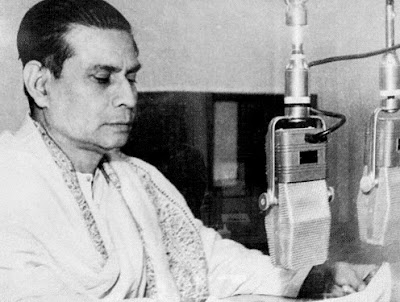 The programme is timeless but the authorities at AIR had the temerity to try to replace this age old programme with one more in keeping with the times, or so they thought. They tried their best, lining up Uttam Kumar as the narrator of a new improved version. There was an uproar that I still remember clearly. There were demonstrations, letters to the editor and what not. To tell you the truth, as far as I remember it, the version was not bad; I at least enjoyed it. But even the legendary status of Uttam Kumar did not protect him from criticism. One legend had to a accept defeat in the hands of another. This was in 1976 and I can still remember our classmate Abhijit mimicking with scorn the elocution of Uttam Kumar. The AIR had to air the original programme on another day and this “new” edition was banished from the airwaves.
This programme was part of my life until 2000 when I went to live in Nepal. There it was not possible, at least in Pokhara where I lived, to hear the programme on the radio. The radio was in any case, on the way out and still awaiting the kiss of life from FM, and we were reduced to hearing programme on tapes and CDs which had by then become available. Since then, except for a 4 year interregnum when I lived in Sikkim and Siliguri, I have had to hear it on tape and more recently on disc. However we try, wherever we are, to hear it at 4.00 AM in the morning. I switch on the device and wake up my family and then its yesterday once more as we savour with pride, an indispensable part of our culture.
Devi pakha has started. The Pujas are here. Durga Mai Ki Jay!!! 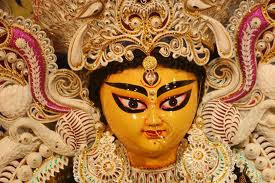 Anonymous said…
Nipon Haque ( Commenting in Facebook): I too have heard about the ganges bath ritual Birendra Krishna Bhadra took at the crack of dawn on the auspicious Mahalaya day and the walk he took to akashbani bhavan refusing conveyance. Was it really a rumor? Regarding Uttam Kumar's one time attempt, contemporaries have heavily criticised it and told me that it was nothing close to Bhadra's performance.
October 17, 2012 at 5:29 PM