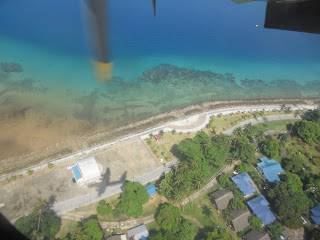 Tioman island lies, in the fanciful description of the locals, like a half submerged dragon in the waters of the South China Sea. It has had its good times and bad over the centuries. It has been the port of call for sailors navigating the routes from China to the Spice Islands, and has also played host to nests of pirates who made these waters the most dangerous in the world whenever the local imperial power was weakened. It is closely accompanied by several islands and the secretive coves of the jungle covered Pahang coast that made it possible for the Orang Laut , the people of the sea, to rule the byways of this patch of ocean. Ruled nominally in the more recent centuries by the Sultan of Pahang, it was signed away to the Johor sultanate by a Prince who needed help in a fratricidal war to gain his dead father’s throne. Later British umpires however saw it being restored to its rightful place so that today it is part of the Pahang state.
This pearl drop in the ocean lies about one hour’s ferry ride from the busy fishing port of Mersing; as one approaches, twin hills rise prominently from its verdure. This has given rise to the dragon story, these being the dragon’s horns. However more prosaic observers have also, less romantically named them asses’ ears. It grew from relative obscurity when it was chosen as the locale for a hit Hollywood movie of the fifties, the South Pacific, which brought into notice the clear blue seas, its turtles, the tropical lushness of its greenery and the rivers and waterfalls, one of which was the scene of a much admired tryst in the movie. Over the past two decades Tioman has become one of the favoured island destinations of the world occasionally being listed as the best 10 island resorts in sundry lists so much in favour with the travel websites. 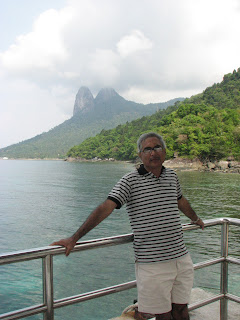 These islands were part of the mainland over 10,000 years ago when the warming of the planet after the last ice age led to the rise of sea levels which cut it off from the mainland. The flora and fauna remained similar, yet different as many of the major predators died out in isolation after they were cut off from the main populations. However some island inhabitants evolved over this period of time to develop distinctive features. Many others managed to gain a toehold in this island by flying there, or arriving clinging onto driftwood, or to the boats of the seaman who traversed these waters. All this has led to a distinctive and rich flora and fauna which is today part of its heritage. 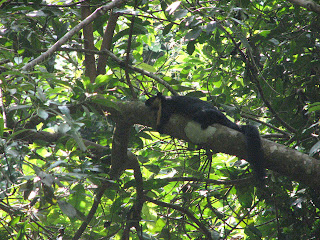 We flew into Tioman in a tiny airplane from the quiet airport at Subang in Kuala Lumpur. This airport was the principal airport of KL, but when the spanking new and modern KLIA was built in the 90s, Subang was left to cater to smaller airplanes flying to destinations in Malaysia and even Indonesia. I myself have flown to Medan and Singapore from here on occasion. This time we are using the Berjaya airline which flies only to definite holiday destinations: Tioman, Langkawi, Penang and Redang being some of them.
The plane is decrepit; the upholstery peeling off in places, the noise is tremendous. This is a DASH 7 aircraft , a 24 seater which has seen better days. However it is difficult to dampen one’s spirits when setting off on a holiday, so we peer out of the windows (which could do with a bit of cleaning, they are as grimy as a Calcutta bus window), and watch the east coast of the peninsula drift past and in a few minutes we are over a number of islands, the chief of which is Tioman. 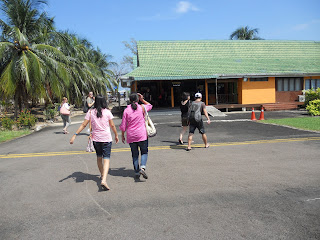 The plane lands at the Tekek Airport, a tiny strip of tarmac nestling between the sea and the lush vegetation of the hills. Facilities are basic, we quickly disembark, grab our luggage and pay the marine conservation fee (RM 5 per person) and sit on the bus that will transport us to the Berjaya Resort where we are staying.
The heat hits us like a wave. It is very hot here, a mild sea breeze notwithstanding. The sun beats down mercilessly, but the sea is emerald green. As the road rises, we notice the islands standing like jewels on the sea. Boats rush across the waters, raising waves which dash against the placid beach. In a few minutes we are at the Berjaya Resort. Chalets dot the grounds which are sandwiched between the jungle clad hills and the beach. The immediate impression is that of a tropical paradise. Beach chairs scattered along the beachfront, a few people swimming in the still waters and children playing with sand buckets in the golden sand. 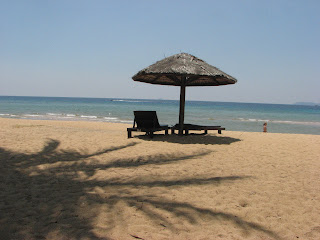 We go snorkeling the first day. A short boat ride out brings us to Trengiss Island. The reefs are close to the island. Several platforms are anchored to the reefs which are home to shoals of fish of all hues, shapes and sizes. This is the Marine Park, but that does not prevent some from feeding the fish with pieces of bread. One small bit brings literally hundreds of fish to the area. Sea cucumbers are also pretty common. The water is warm and snorkeling in these still and relatively shallow waters is great fun. There are dive sites too, some more intrepid tourists are falling off boats in the approved fashion that we have seen in so many National Geographic documentaries, but then resurfacing in a tangle, gasping for breath as they forget to breathe through the mouth. The plastic platform is unbearably hot; stepping on it is like walking on coals of fire. We return to the dive centre after a couple of hours and repair to the beach bar for a long cool and non alcoholic drink.
The evening is lit up by a million stars as we relax by the sea. Tomorrow we will go for a round the island boat ride.
( to be continued)
Holiday Tioman travel