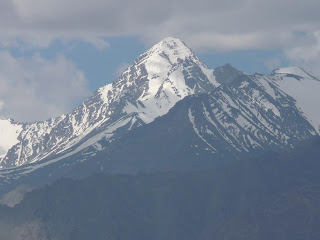 I have had some close shaves in my life. Most of them happened during my regular trekking days. I remember two of them fairly vividly.
The first was when we were climbing Stok Kangri in the Ladakh Himalayas. When we crossed the Rohtang Pass and then the Baralacha pass and the Lachung La, the weather was superb. I remember thinking that we were now in the rain shadow area, so we could expect sunshine all summer.
However when we established the base camp, the weather had turned distinctly unfriendly. There were clouds in the sky, gusty winds and our guide was clearly uneasy. However fitful sunshine prevailed and we started the climb. The day of the climb was sunny initially but soon turned windy and finally stormy. Rain, then sleet and finally snow began to fall. We pushed on nevertheless, but soon the visibility became less than a few feet. Deciding that discretion was the better part of valour we turned back. We battled the snow and winds to get back to the base camp where we huddled in out tents.
And snow began to fall. It snowed steadily and continuously for 4 days. We were not to know, but the same disturbance (what a euphemism) had caused the Amarnath Yatra which was then taking place in the Kashmir Valley to be discontinued and had also claimed several lives. However we watched apprehensively as the snow drifts rose higher and higher cutting us off from retreat. Out food supplies began to dwindle and we began to seriously wonder whether our mountaineering days were coming to a snowy end.
On the third night we had a team conference and decided that rather than dying tamely in our tents, we would try to find our way down the mountain on the morrow come what may.
The gods were on our side. We got up next morning to find that the snow had stopped. We began to descend with difficulty, the snow drifts were really large and we were really not sure whether our next step would take us plunging down a concealed crevasse or over the edge of a cliff.
But as I said, the gods were on our side for once and we managed to make our way down, tired, hungry, but alive. 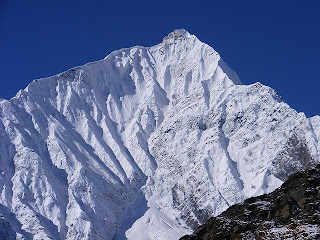 The Hanuman Tibba ( Photo: Google Images)
The second time I have faced what looked like reasonably certain death was when we climbed the Tentu Pass. While this is a tough trek, it is not a particularly dangerous one in summer. We attempted the climb a trifle early in the season when the snow was melting and this made the climb far more challenging. About halfway up the steep slope, an avalanche of rocks and snow started. One of our porters was hit by a small boulder and fell down bleeding profusely from a scalp wound. . Fortunately as I said, it was just a scalp wound and I tended to it the best I could, nervously looking over my shoulder for any more missiles. Fortunately there were snowslips and some rock falls as well, but away from the left side of the slope which we were hugging. We managed to complete the climb to the advanced base camp using our ice axes and the next day completed one of the most significant climbs in my trekking career. Once we crossed the pass, we camped at a snowfield, the Hanuman Tibba rearing above us. The area is superbly beautiful and we had a wonderful 7 day walk down to the Ravi River during which I made my first acquaintance with several Himalayan Brown Bears including one huge specimen which came rooting near our kitchen tent at night and almost scared me into the middle of tomorrow.

But my most recent brush with death came last Thursday when I was involved in a road accident. I was returning from the KL airport when an idiot driver who braked without warning and ostensible cause led my car to lose control and overturn. Astonishingly all of us in the car got without serious damage. The car is a write off but astonishingly all of us go off with reasonably minor injuries.
However every time this happens it makes you reflect on life and what you want from it a little more seriously. I have now decided to spend far more time with family than I have done in the past. My days of living alone for work are now over. Whatever time I have left needs to be spent with friends and family. Expect me to spend more time at home. Friends can expect to see me more often. Life is good, but it can also be cut down at any moment. So I have decided to do the things that matter.

yachana said…
hmm...you've set us thinking.not a major thing but when i thought about similar things last time i decided to have more gratitude for things that make my life worthwhile.
August 22, 2013 at 1:40 PM