Corruption and the aam admi 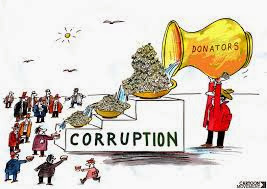 The biggest difficulty of removing corruption from India is that the aam admi’s hatred of corruption extends only to other people’s corruption. They are quite comfortable with their own, which, in their opinion is not corruption at all, but a perk of office to which they are entitled. Take for instance the newspapers who pontificate on corruption and its influence. They are quite ok with paid news, which all newspapers appear to indulge in provided the price is right. An official report on this issue was never even reported on by any newspaper and it was quietly buried.
Take our industrialists. They yell about corruption and subsidies, but are the biggest bribe givers and cheerfully swallow subsidies galore. (By one account, the revered Tatas got Rs 33,000 crores as subsidy to set up the Nano factory in Gujarat. This report also, I notice got no airing in the newspapers.)
Or come closer home. There is no practicing doctor who does not accept gifts, money, travel benefits and other patently illegal and unethical gratification from pharmaceutical companies. Lawyers are acknowledged world champions in this regard; the best part of their corruption is that if you point it out to the honorable judiciary, they can even jail you for contempt of court even if you prove your allegations!
Teachers do not hesitate to accept gifts and money from students in the name of Teachers’ Day presents for help during the examinations and other return gifts. I know college teachers who take book grants to embellish their personal libraries with the latest fiction. There are others who go to work three days a week and are not in the least apologetic for this.
Businessmen talk sanctimoniously about corruption (attend any Rotary Club meeting) but have little difficulty in stealing money from the customers, the government and their fellow businessmen whenever they can get away with it.
Lest we forget in the din of electoral politics, the pretenders to Delhi’s throne are led by a party whose one time president had to relinquish office because he was caught on tape, taking a bribe. The chief wheeler and dealer of its last government was killed by his brother because he refused to share the swag with him. Our lefty pals have teamed up with a lady in Tamil Nadu who also has prime ministerial ambitions: she is being prosecuted for corruption and if her stars are bad, may be convicted just before the elections.
Or take the more aam admis. The corruption of autorickshaw drivers in Kolkata is legion. The lower level employees of most government departments: telephones, railways, irrigation, judiciaries are quite happy to demand and accept bribes while railing against the perpetrators of the 2 G scam.
From top to bottom, Indian society is corrupt. There is nobody who can stand up to say that they do not indulge in corrupt practices. If they same some people they are those who have no access to means of illegal gratification. This becomes obvious as we see previously firebrand politicians coming to power. If you read today’s newspapers it appears that the AAM AADMI party is the first activist group that came to power, one forgets that Lalu Prasad Yadav was JP’s chief lieutenant in Bihar: the movement was, let me remind you was against corruption!!
Under the circumstances, all this talk on corruption is just hot air. As long as the aam admi does not correct itself, there is n relief possible. So don’t hold your breath for a corruption free government: it is not going to happen!