Bhagwati, Panagariya and Why Growth Matters

November 30, 2015
Aravind Panagriya and Jagdish Bhagwati have been painted by media (the non presstitute kind, which are fervent Modibhakts) as opposed to the last UPA government and its doings. It was with curiosity then that I took up their well-known book “Why growth matters” . In most editorial and oped columns, the book has been depicted as ferociously opposed to the UPA economic policies and it has been claimed that the book has shown how the UPA government had derailed economic growth.
However when I read the book, which was published in 2013, and presumably written in 2012 , judging by the tables published, I was bewildered. Nowhere did I find any denunciation of the UPA policies. To the contrary, all their calculations have shown that the UPA government did quite well in most of the economic parameters that they calculated.
Let us take for instance the question of poverty reduction. The opposition ( read the BJP) at that time made a huge hue and cry about the poverty figures and claimed that the Tendulkar  Committee recommendations were some sort of huge conspiracy( I can still remember the Facebook posts by the Hindutwits) about how this was a statistical jugglery to reduce poverty levels by sleight of hand.
Read what they have to say:
“In the second half of 2011, the media created the distinct impression that the Planning Commission, in its submission to the Supreme Court, had deliberately lowered the poverty lines to exclude many of the genuinely poor…..


the Planning Commission had actually raised the poverty line" 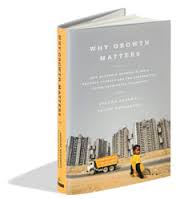 They have fully supported the then Panning Commission on this, completely contrary to the impression created by the media.
Another quote: “Mukim and Pangariya show strikingly that poverty fell for the scheduled tribes and Scheduled tribes between every pair of successive surveys in rural and urban areas. “
A very instructive table in page 30 shows the growth rate (annual GDP growth at factor cost)  to have risen from 5.8% in the 1988-2003 phase which included the famed Vajpayee government to 8.2% in 2003 -20012 ( entirely UPA ruled).
Another myth that they have tackled is that Bangladesh, and sub Saharan African countries have done a lot better than India in health matters. They have pointed out that while Bangladesh has a lower infant mortality rate than India, ( 41vs50), the rate of stillbirth in Bangladesh which is 36 against India’s 22 ( all per 1000 births) offsets the difference handily. The maternal mortality rate is much higher than in India. They have also pertinently pointed out that the correct comparison would be with West Bengal where all parameters are much better than in Bangladesh.
I have always felt this when I hear many Indian social scientists lauding the progress of Bangladesh vis a vis India/ West Bengal. The latest is last week’s column by Ramchandra Guha in the Telegraph. If the economy is doing so well, if all the health and other figures are so good, how come the migration takes place from Bangladesh to India and not the other way around? It reminds me of the communist paradises which the workers could not wait to abandon  for the decadent West where they were exploited on a daily basis according to the same social scientists.
Another myth that is propagated is that they are against the so called Track 2 reforms where entitlements are made for poorer populations. They have, of course criticized the huge corruption associated with all government programmes  ( which is till ongoing) , but they are all praise for the Rural work programme and the Right to Food bill. They have made suggestions to improve the programmes, but there is no criticism of the programmes themselves.
Another striking feature is the respectful tone that they have adopted towards Jawaharlal Nehru and his economic and other policies. They are avowedly right wing, but have no hesitation in giving him his due, unlike their so called followers who use abusive language and befoul what can be an honest debate.
The problem with Hindutwits is that they hold positions that are indefensible and cannot debate  these positions. So obviously the only response can only be abuse and threats. I am glad to see that the avalanche of social media abuse is showing signs of decline. Many of my friends who were fervent forwarders of asinine Hindu twit posts have begun to show indifference. I am glad because, debate and discussion is the only way that we can prevent the sort of government that we had for the last two years of the UPA regime; setting up of systems to eliminate the sources of corruption are essential and that idiots are idiots, whether in the opposition or in power.
One thing that I am now finding a trifle amusing is that Panagariya has yet to introduce or influence some policies that he had put forward in the book as the boss of the Niti Ayog . Perhaps he has already discovered that prescribing from the sidelines is a lot different form actually doing it on the ground?
( Jagdish Bhagwati and Arvind Panagariya: Why Growth Matters : Public Affairs, New York, 2013 )
economics growth India