The Invention of Zero and the Bakshali Manuscript

The greatest mathematical discovery of all time was undoubtedly the invention of Zero. This allowed mathematicians and common people to make calculations easily and conveniently, calculations that were otherwise so complex that even very intelligent people floundered in making them. As Bailey and Borwein put it in a major article published in 2011, it was a discovery that eluded the greatest minds of the Western civilizations, mathematicians of the caliber of Archimedes, and unsurprisingly was resisted fiercely by Western mathematicians when they were first introduced to it by the Arabs and even today is often ascribed to sources other than the right one. As the French historian Georges Ifrah describes it ““Now that we can stand back from the story, the birth of our modern number-system seems a colossal event in the history of humanity, as momentous as the mastery of fire, the development of agriculture, or the invention of writing, of the wheel, or of the steam engine.”
This discovery took place in India in the early years of the Christian era. I like to think that it was in the days of the Gupta empire when a mathematician working in Taxila discovered that inventing a “sunya “ ( zero) would make it easy to calculate in tens. But the fact is that we simply do not know. What we do know is that the first accurately dated manuscript that used this system of decimal notation and zero was the Indian astronomical work Lokavibhaga (Parts of the Universe"). This manuscript uses the decimal system as a matter of course, assuming that the reader is aware of the system thus proving that it originated much earlier than the 458 CE to which this manuscript can be accurately dated.
That brings up to an even older manuscript which is to date the earliest manuscript which mentions the word Zero (sunya).
In undivided India, the North West Frontier province has always been a romantic name. The romance has been created in the nineteenth century by the writings of English writers who found the feudal structure of the area very much to their liking and portrayed the endless feuds and never ending wars as a sort of knightly activity. However this geographical area  was a wonderland long before this when it was the home of the world’s oldest universities and a vibrant civilization that lasted thousands of years and gave the name Gandhara to Indian history. It was during this time in history that this land was the source of much that was great in Indian history.
However in 1881, Bakshali was a nondescript village about 50 miles away from the provincial capital Peshawar. This was in the Mardan tehsil and Bakshali was a village like any other, peopled by poor peasants and grazers. One such man whose name unfortunately I could not unearth, was digging at a mound at the outskirts of the village and he found, concealed between two slabs of ancient stone a manuscript, the so called Bakshali Manuscript. This man was the tenant in the land of the local Inspector of Police Mian An –Wan Uddin and when he was informed of the matter he took it to the Assistant Commissioner of Mardan . The AC now forwarded the manuscript to the then Lieutenant governor of Punjab who was advised by the then Director General of Archeology in India, General Sir Alexander Cunningham to send it to Dr Rudolf Hoernle who was heading the Calcutta Madrassah .
Hoernle was the first antiquarian who examined the manuscript and he presented a brief report before the Asiatic Society of Bengal  and this was reprinted in their journal “ The Indian Antiquary” in 1883. He gave a more detailed report at an international conference in Vienna in 1886. This study was also published in the same journal in 1888. Subsequently he presented to the manuscript to the Bodleian Library at Oxford where it still lies.
Hoernle worked on the manuscript for almost 20 years, he was the person who put lot of effort into making it possible to read the manuscript. When it was found,, the birch bark manuscript consisted of an indeterminate number of strips , many of which were stuck together and well-nigh impossible to separate.  The leaves were brittle and it took much effort to separate them and he managed to get 70 leaves; many of them had large parts missing. Hoernle and subsequent researchers who have worked on this manuscript were of the opinion that the manuscript is only the middle part of a much larger manuscript. Later researchers who added much to the knowledge gained form this treasure included Bibhutibhusan Dutta , Dutta was one of the earliest doctorates in mathematics form Calcutta University and retired as the Rashbehari  Professor of  Applied mathematics and in later life became a sanyasi, dying in Puskar as Swami Vidyaranya in 1958. 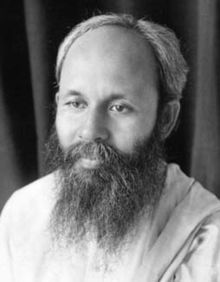 BibhutiBhushan Dutta
( Source: Wikipedia)
Another infamous person, who published the official Archeological Society of India version of the document, was G R Kaye.He did signal work in that he published the manuscript in facsimile form and this is the version that most subsequent workers used. However his wholly untenable conclusions that that the manuscript dates to the twelfth century and his contention that the manuscript was based on Greek sources, made him a laughing stock.
It was in this manuscript, which contains many trigonometric, arithmetical and other exercises that the Zero was first symbolized as dot  or a sunya. This makes it the earliest reference to zero in the world.
What then is the date of the manuscript? There are two clues: The language and script used and the contents. The manuscript was written a series of shlokas which immediately dates it to before 500 CE as the Arya style was had largely replaced the shloka style by that date. It was also written in the Gatha dialect which was a precursor to Sanskrit which largely replaced in by 300 CE. The contents of the manuscript also suggests that it predates the classical period of Indian Mathematics, the period of Aryabhatta whose famous Aryabhatia has been dated to c 500CE. All this suggests that the actual work on which this manuscript is an obvious copy was written in the 1st to 3rd centuries of the CE. This particular manuscript has not been accurately dated yet, but recently there is a move to do radiocarbon dating to accurately date this particular copy.
The concept of zero rapidly spread to China where there is evidence that it was available during the Sui dynasty (581-616CE). Later it was carried by Persian and Arab scholars to the European continent where as we have seen it received a cool reception. That was the time when European scholarship believed that all knowledge came from the Greeks!