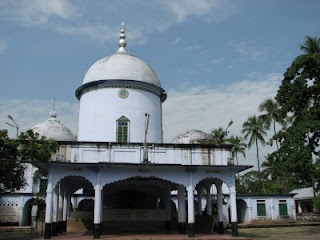 The Jalpaiguri district links the body of West Bengal to the North East. It lies north of Bangladesh, stretching from the foothills of the Bhutan Hills to the former princely state of Cooch Behar and then to Assam.
The district town, Jalpaiguri lies on the East bank of the Teesta. Crossing the Teesta, the scenery is typically that of Bengal. Green paddy fields, ponds and large trees. Just to the north of the road to Cooch Behar lie the jungles of the Terai, home to the one horned Indian Rhinoceros. But here all is bucolic Bengal. The road to the Bangladesh border goes of at right angles from the Jalpaiguri Cooch Behar road and about 7 kilometers distant is the Jalpesh temple.
The story of this temple begins in mythology. The Rangpur district, now in Bangladesh, was part of the kingdom of Kamrup in the days of the Mahabharata. The king of these parts, Baghadatta one of the Barman kings, sided with the losers in the battle of Kurukshetra and lost his life to the third Pandava, Arjun .However his line endured , they comprised some twenty three successors, last of whom was Jalpesh who built the temple in 800 AD or thereabouts. The temple was dedicated to Shiva and it lasted for some three centuries before it was destroyed allegedly by the iconoclastic zeal of Bhaktiyar Khilji who invaded Kamrup (and got his just deserts.) Subsequently the legend is that one of the Kings of Bhutan restored it in the 12th century but it had been lost to the jungle. King Pranannarayan of the Cooch Behar dynasty was fond of hunting in the jungles in this area. He was told that a cow was known to disappear into the jungle every morning. On having the cow followed he found that it used to spray its milk onto a stone lying in the undergrowth. On excavation he found the linga and reestablished the temple in 1665. For this purpose he had masons brought from Delhi, the then imperial capital, but he died and his work was completed by his successor, King Madan Narayan. He also arranged for the lease of lands for the maintenance of the temple.
After the death of King Rupnarayan in 1714 there was turmoil in the Cooch Behar Raj and the Bhutanese used the opportunity to occupy the Western Dooars. The Kings of Bhutan then took over the maintenance of the shrine and this arrangement continued until the British takeover in 1867. Sir Charles Eliot, the then Lt Governor of Bengal resumed most of the lands that were given as grants by the Cooch Behar throne, however he sanctioned a sum of Rs 60 per year for the payment of three pujaris and Rs 100/ year for the repair of the temple in 1891.In 1894, a committee was set up to run the affairs of the temple and this arrangement still holds good with some modifications.
In 1897 an earthquake destroyed the temple almost completely. Government help was not available and so a subscription was set up to raise funds for the repair of the temple. A partial repair was possible from the funds that were raised but it was not until the 1940s that the temple was reestablished in its present form.
The temple is the location for a huge mela in the month of January. This attracts people from all over the Dooars and Assam as well as the hills of the Darjeeling district. It is really worth seeing, as to my mind, it is perhaps one of the last examples of the rural Bengal mela that is slowly but surely losing its fight with modernity.
We visit the temple every year on Sasthi day of the Durga Puja. It has become a tradition now for some years for us. This year was no exception. Following the Puja we have some lovely Kachuri and Tarkari in one of the local restaurants (or Shacks, to be more precise). The temple draws huge crowds during the month of Shravan when youths carry water over long distances to pour over the deity. One peculiarity of the Shivalinga here is that it lies under abut two feet of water in an opening in the ground and you have to lie almost flat on the ground to reach it.
I love this temple. At its present form it has no great architectural significance, but the thought that this place has attracted pilgrims for the past 1200 years fills me with romance. I can easily picture Bhutanese travelling over the mountains and then through the jungles of the Terai to offer their prayers to this shrine. I hope people will still be praying here 1200 years in the future.
history Jalpesh temple