A Trip To Dhaka 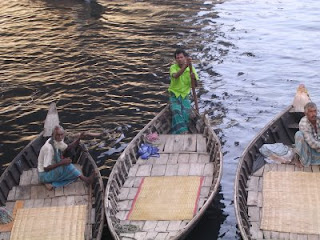 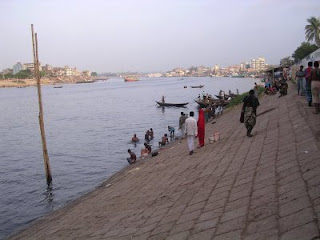 I was in Dhaka last week. It was a business trip, but it was an occasion to renew some friendships and to also renew acquaintance with the second great city of Bengal, now unfortunately in two parts, thanks to our own stupidity. The Partition of Bengal was a traversty of history, but the conditions were such that there was an inevitability about it in 1947. I don’t hold with those who happily blame the politicians, the Britishers and everybody else for the division of Bengal, but the people of Bengal must take the final blame. If they had not turned into animals, the partition could have been averted. But the mistrust that ordinary people of each religion bore to each other overcame 1000 years of cooperation and in the event the Partition was inevitable. However, that it need not be permanent has been proved by the events in Germany. I firmly believe that in the next 15-20 years the partition will be reversed, not perhaps in the sense of a political reunion of the two Bengals, but in the sense that borders will become irrelevant. Fortunately, my political prognostications are often better than my predictions in other events, so I live in hope.
Dhaka Airport is not a modern airport in any sense of the term. It is a poor cousin of Kolkata, which is itself a parody of other Indian airports let alone, East Asian ones. Outside is a scene of chaos, not unfamiliar to a Calcuttan. A chaotic stream of vehicles jams the roads; rickshaws, cars, buses all jostling for space and with a cavalier disregard for such niceties as rules of the road. We were met my Sovan, an old student of mine and who had set up our contacts here in Dhaka. It took us two and a half hours to negotiate the 10-12 km to our hotel. The roads of Dhaka are however very similar to ours. There are shops and hawkers and loudspeakers and people chatting in the middle of the road, oblivious of the traffic and people around them. It could be any city in (our) Bengal. Kolkata traffic is thankfully slightly more organized now, but the blithe disregard for all rules reminded me forcefully of Siliguri. Maybe if it keeps expanding at its present rate, Siliguri will soon be in a similar state.
However Dhaka still maintains several open spaces. Even in the urban conglomeration of Wari, where all single houses are being converted into tall apartment buildings, with no thought as to how traffic will move in the lanes that criss cross this old area, the Baldah gardens still exist, an oasis in an urban desert. This garden was set up in the 30s of the last century by a Nara narayan Roy Chowdhury, the Zamindar of Baldah and is now looked after by the Bangladesh Department of Forestry. Once inside I could imagine myself in rural Bengal, surrounded by palm trees and sit beside a lily pond, a la the large landowners of yester year. It is, like all precious specks of green in Kolkata, full of young lovers trying to find some privacy in a city where it is a commodity more precious than gold.
The Ramana Park still exists, only the famous Kali temple is now gone, bombed into extinction by the Pakistanis in 1971 and never rebuilt. There are some newer green areas, notably around the Parliament building. The Dhaka University area and the adjacent Dhaka Medical College, now a part of Bengali history after the events of 1971, still maintain their old grandeur. After all this is where S N Bose and R C Majumdar worked and taught!
The Buriganga, whose stories I have heard from many nostalgic old Dhaka hands, was a sewer. About the width of our Hooghly, it is lined by houses and it is easy to see that the real estate industry, which seems to be only flourishing industry in East Bengal as it is in the West, is slowly trying to fill the banks and narrow the river to find more space for buildings. The river was full of boats, the boatmen confirming to my imagination: one could imagine the self same boatmen taking Rabindranath for an evening spin on the river.
The eateries of Dhaka are, as in Calcutta, out of the world. With Sovan as our guide we could easily find our way t o several restaurants, both posh and lowly to have the best food in the world at rock bottom prices! We had Porotha and Dal in a shop in Wari that reminded me of Putiram in good old College Street, a bhui kichuri, (Lentils with meat)which I haven’t ever had in a restaurant in Calcutta, and which took me back to many a picnic of my childhood, and finally fish of all varieties at a restaurant whose name, I am sorry to say , I have forgotten, as well as of course when I went to dinner at my friends’ houses. It confirmed me in my firm parochial belief that Bengali food is the best; the only one coming close to it is Mughlai khana of the NW India.
I walked through the streets at every opportunity, observing the rush of humanity, the people who walked, talked, sold and bought, haggled and even surprisingly held hands on the streets. The feeling you get is one of regret, that this is not foreign to us by any means; the people of this country are, as the Bible said, flesh of our flesh, and blood of our blood. It is not conceivable that when even 60 years after partition we have remained the same, that we can be a different people. We may live on different sides of a political divide, but Bengalis remain a single people and we will remain so until we lose our language.
Bengali Dhaka