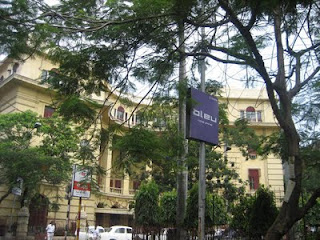 Revisiting Calcutta is like meeting an old girlfriend with whom you have kept up an indifferent friendship. If you suddenly run into her somewhere you feel relieved that you got your self out of the relationship in time when you notice the circles around her eyes and the ill cut clothes. As I landed in Dum Dum, the shabbiness of the International Arrival terminal was in stark contrast to Singapore where I transited. The Immigration was comparatively fast this time, unexpectedly so, because I know that even when I used to regularly fly in from Nepal, the officers used to scrutinize my passport and spend an interminable amount of time to key in my details (one finger) onto the computers. But the welcome ended there. The luggage took ages coming. I was beginning to wonder whether my modest suitcase had been carried on to Dhaka or something when it finally appeared. But the best was the prepaid Taxi station where they would not book me in as there were no taxis!!! After a half hour wait, I got the usual ramshackle cab that took me home.
But like your old girlfriend, a sudden smile, or a trick of pushing her hair back often remind you why you used to write poems for her, Calcutta reminded me the next day why I loved her so much at least once. The next day I was traveling to keep an appointment and took a cab which took me past the maidan and the leafy trees, even bigger and leafier that I remembered, the green green grass where I have played so may games and watched many more, the majesty of the AIR building and the towers of the High Court just visible from afar testified to what Calcutta was and still is. The Puja pandals were just being covered with cloth though the Vishwakarma pandals were in full splendour.
I got off at Esplande and walked through the Curzon Park for old time’s sake. The rat park has long gone, trams seemed to be all sleeping somnolently, but the Tram Goomty still has the canteen where we used to eat ghughny at a pittance. I am sure poverty stricken students still do. The Statesman Building can hardly be seen from the street, but if you walk close it still looks the same. A little smaller than I remember it perhaps, but still worth a long look. The CESC Building too which divides the approach to Bentinck street and Central Avenue looks as nice as ever though a large tree blocks your vision.
Calcutta cries out to be photographed. Not the sort of pictures that we take in KL or Singapore, standard views of beautiful buildings with large vistas. Calcutta is the place to find hidden gems. The Medical College Building, the St John’s Church many crumbling mansions in and around Chitpur Road, the Nakhoda Mosque and most of all the incredible energy of the people who are born, live, work and die here. The heroism of these men and women is incredible and I am forced to salute it.
Maybe I should not have left this lady altogether, but will she respond to my timid overtures now from the lover who ditched her long long ago?
Calcutta