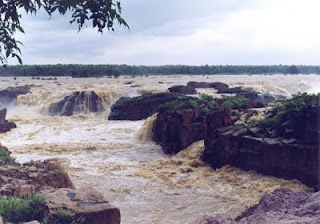 Bundelkhand is one of my favourite parts of India. It is unfortunately one of the most neglected parts of India as well and drought and a chronic hunger stalk the land. This does not detract from its beauty and the grandeur of a land that was once the home of the Chandela Kings who built the Khajuraho temples. It is also the home of several rivers that are in many ways unique. These include the Chambal River and the Ken both of which have carved some of the moist scenic gorges. The rivers are also the home of some of the largest populations of the Gharial, now decimated by a mysterious illness, probably related to pollution in the river.
The story goes that the Moon god seduced a Brahmin girl when she had gone to the river to bathe. After the birth of her son, the young unmarried mother had to take refuge in the forests of Central India and this son, Chandravarman, grew up to found the Chandela dynasty. He started the building of temples in Khajuraho, successive rulers adding to the number of temples that are today a marvel of beauty and erotic art.
There are several groups of temples, some well preserved, and others not so well. They are scattered over a large area and it takes several days to see thenm all. There is a very comfortable Tourist lodge that preserves all the virtues of old style bungalows, large rooms, a verandah and good plain cooking! Khajuraho is also a favourite with the backpacking crowd of western tourists which means that it is full of expensive bric a brac and aggressive shopkeepers.
The Panna diamond mines are close to Khajuraho and so is the Panna Tiger reserve. I had visited Khajuraho earlier but had never been to the Tiger reserve. It is a dry deciduous forest, the sort of forests that Mowgli used to move around in. Ken, which has become one of my favourite rivers flows through the park which was a hunting preserve of the Panna royal family whose havelis still stand in stand around the park.
Last year we attended the Khajuraho dance festival. Held every spring, it is the first of the dance festivals which have now become quite common in many temple complexes in India. It is a moving experience to see the dance performances of leading dancers of India with the temples of Khajuraho as a backdrop. This time of the year is the best to visit Khajuraho in my opinion. The palas and the simul trees are in bloom and there are hundreds of birds attracted to the flowers. The hornbill is seen so commonly and we saw a pair nesting in one of the trees in the temple complex. The weather is cool, but not bitingly cold. Cycling is the best way to get around and that is what we did, cycling down to the next village of an afternoon, with nilgais for company.
The landscape near Khajuraho reminds one of the old stories of the Rani of Jhansi and unfortunately of the Chambal dacoits as well. It is ideally suited to horsemen galloping down the ravines to loot and plunder and to this day it is not uncommon to have outlaws ravaging villages in this manner. There is an ongoing agitation to set up a separate Bundelkhand state ( this region is divided between UP and Madhya Pradesh at present) . Perhaps that will be their salvation.
Bundelkhand Khajuraho temples