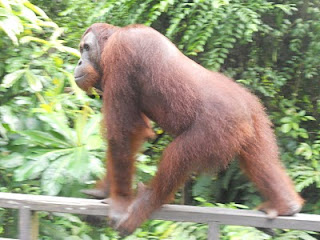 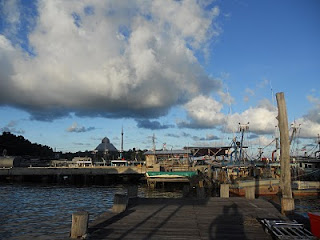 After the fiasco of our last planned trip (to Borobodur, where the eruption of Mount Merapi forced the cancellation of our trip) we were a trifle apprehensive about our next trip this time to Sandakan, in the East coast of the Borneo islands. Just to explain, Borneo, the third largest island in the world is shared by three countries, the tiny sultanate of Brunei, Indonesia and two Malaysian states which straddle the northern part of the island and this time we were headed for Sandakan in the state of Sabah.
The word Sabah means “ the land below the wind”, which implies that it lies below the typhoon belt that ravages the Philippines, Taiwan and South China from time to time. When Magellan first came sailing around these waters, Sabah had been for centuries a source of edible bird’s nests, timber and much other forest produce for the Chinese. The population has a large proportion of Chinese.
Sabah has some of the best rain forest in the world, now sadly depleted by the greed of timber companies and palm oil manufacturers who have ensured that such forest that exists is now fragmented and under constant threat. This has led to a precipitous fall in the numbers of its extraordinarily varied wildlife, which include the Orang Utan, (seen only in Sumatra other than here) and the proboscis Monkey (which is endemic to Borneo).
Sandakan is a coastal city which was the capital of British Borneo, but now plays second fiddle to Kota Kinabalu (of which in another post). However the pristine sea, the rain forests and the wildlife make it one of the most exciting places I have ever visited. We flew down by an early morning flight which we almost missed because we were breakfasting at the café unmindful of the fact that boarding was almost complete. We were the last to board, causing the plane to be slightly delayed. We flew over the South China Sea and then past Kota Kinabalu lying like a set of toy houses alongside the ocean and then the Mount Kota Kinabalu, the highest peak in South Asia before we descended to the Sandakan airport
That day was spent exploring the city. The city is small and the hotel that we stayed in was ideally located near the Central market and with a wide marina in front which was dotted with cafes. Several islands could be seen across the bay, all carpeted with dense vegetation. Shipping trawlers as well as pleasure boats were making rounds, the Turtle Island being one of the major attractions of this place; unfortunately at this season, devoid of turtles.
The next day we visited the Sepilok Orang Utan rehabilitation centre where rescued Orang Utans and those abandoned by their parents are nurtured before reintroduction into the wild. The animals are kept in a patch of rainforest which maintains the grandeur of old. Here I had my first sight of the “Man of the Forest”: the Orang Utan which as I said, now exists only in the forests of Sumatra and in the Borneo. This ape the only purely Asiatic ape, is one of man’s closest relatives and has extraordinarily human characteristics, 97% of our DNA is in common. We saw many animals and in fact one of them came very close, as if to pose for pictures. Wikepedia informs me that they are so human that they have been known to rape women, and an attempt was once made by an infatuated Orang Utan on Julia Roberts who escaped this indignity by the skin of her teeth ( or perhaps by the efforts of her film crew, 5 of whom were necessary to drag the besotted animal off her!
Sandakan travel Wildlife