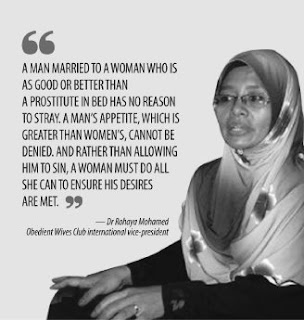 When I was in India I noticed some Indian papers reporting the setting up of an “ Obedient Wife’s Club” in Malaysia. Set up by a fringe Islamic group Global Ikhwan, (which had the previous distinction of setting up a Polygamy club as well), this club with a membership of 800 was set up amongst fanfare and a guest list of 1000.
When I got back last week, I found out some more about this group and it was quite entertaining to hear what they had to say. One of the leaders of this group who is allegedly a doctor, Rohaya Mohammad, gave several tips to women to ensure happy and satisfactory married lives. These women were special too, more than 30% of them were in polygamous marriages which is , while not prevelant, is not really uncommon in Malaysia as in many Islamic countries. However, Non Muslims would also be welcome to join this unique club ,we were assured.
: A good wife is perceived to be prim and proper – you just take care of the children – but not much is emphasised on fulfilling sexual needs of the husband. If he needs sex, obey him,” she exhorted her membership. In fact she further explained and I quote ““You must satisfy your husband. A good wife should be a whore in bed.” Later, responding to the barrage of criticism that rained on her, she explained that she did not mean that women should turn into street corner tarts, but “high class prostitutes” How they would attain these arts was something that mercifully she did not explain. I had a vision of good Malaysian girls preparing for marriage by delving deeply into copies of the Kama Sutra!
Fortunately the response of the civil society in Malaysia has been to dismiss her as somebody beneath contempt. There has been criticism, mostly from Malaysian Women’ organisations which have suggested that she is dragging women back to some medieval concept of a good wife which can have no relevance today, and in fact is deeply insulting to Malaysian womanhood.
Malaysia. Women Sexism