The Fire at AMRI 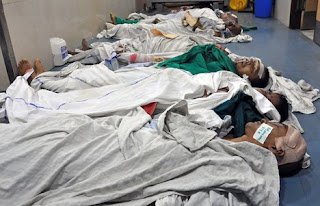 Neha Sharma said…
Patient safety is not a concern for hospitals. Regency Hospital is a well-known hospital in Kanpur, UP and the management claims to give quality treatment to the patients. Here are two incidents, you judge for yourself:
I accompanied a patient for X-ray, the patient is 70 year old lady, not very firm, needs help walking and climbing. There were two technicians who took x-ray and both of them left the patient on X-ray table and went to another room to check if the x-ray they have just taken is good. The patient was trying to get down herself and was about to fall from the table when I noticed from outside the room and ran to catch her from falling but it did bruise her arm.
The X-ray technicians had to repeat the x-ray on the same patient and this time I told the technicians but this time they did not close the tray properly and it was jetting out and the patient got hit by it and bled. A diabetic patient getting wounded at x-ray table? Both these incidents should have been reported but no one reported them.
Third incident happened with me, also at Regency Hospital, patient was being transported and the stretcher hit me. The patient transportation staff did not even have the courtesy to stop and say sorry, are you OK.
This is just an example of patient safety and caring attitude. I am told the said hospital is trying to get NABH certification. Is anyone listening, UP Government, Chief Minister, Health Minister, health secretary NABH people. If you are listening then do some
December 13, 2011 at 11:54 PM