February 29, 2012
One of my favourite books in the Corbett canon is the “The Maneating Leopard of Rudraprayag”. I still remember the thrill that went up my spine when I first visited Rudraprayag in 1985 and saw the plaque put up under a tree where the leopard that killed hundreds of people in the twenties was finally killed by Jim Corbett.
On rereading the book recently, I specifically noticed a paragraph and I quote it here in full: "Three days’ journey up the left bank of the Ganges and you have reached the ancient capital of Garhwal, Shreenagar, a historic, religious, and trading centre of considerable importance and of great beauty, nestling in a wide, open valley surrounded by high mountains. It was here, in the year 1805, that the forebears of the Garhwali soldiers who have fought so gallantly in two world wars made their last, and unsuccessful, stand against the Gurkha invaders, and it is a matter of great regret to the people of Garhwal that their ancient city of Shreenagar, together with the palaces of their kings, was swept away, to the last stone, by the bursting of the Gohna Lake dam in 1894. This dam, caused by a landslide in the valley of the Birehi Ganga, a tributary of the Ganges, was 11000 feet wide at the base, 2000 feet wide at the summit, and 900 feet high, and when it burst, ten billion cubic feet of water were released in the short space of six hours. So well (warned/expected) was the bursting of the dam that, though the flood devastated the valley of the Ganges right down to Hardwar and swept away every bridge, only one family was lost, the members of which had returned to the danger-zone after having been forcibly removed from it". 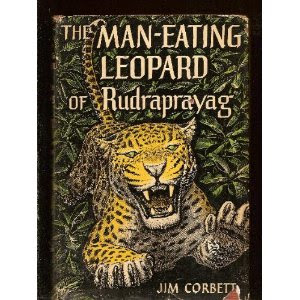 I researched the net and some books that I possess for details of this incident and I think it might be interesting to relate the happenings more than a century ago in a remote Garhwali village.
The Birahi Ganga River meets the Alakananda near the Birahi town, around 7 km distant from Chamoli. A huge landslip which is not uncommon in the Himalayas took place in September 1893, just as the monsoons were drawing to a close. This led to a natural dam across the Birahi Ganga river which was of massive dimensions. The Imperial Gazetter of India Vol 12 recorded that the Gohna lake was “A lake of recent formation situated near the small village of the same name in the Garhwal District of the United Provinces, in 30° 22' N. and 79° 29' E. Towards the end of the rains in 1893 two landslips took place on the right bank of the Birahi Ganga, a tributary of the Alaknanda {see Ganges). The side of a steep hill, towering 4,000 feet above the level of the stream, crashed down into the valley, hurling large blocks of limestone against the opposite cliff to the distance of a mile in places, and forming a dam more than two miles long at the base and one-third of a mile along the top, which completely blocked the valley to a height of 850 to 900 feet. It has been estimated that the dam contained 9 billion cubic feet of dolomite and detritus, weighing 800 million tons.” What happened subsequently has also been recorded: “In December 1893, the area of the lake was about one square mile and its depth 450 feet. By July, 1894, the lake had become a large sheet of water, nearly 4 miles long and half a mile broad, and the level of the water had risen nearly 170 feet, while percolation was freely taking place. .V month later the water was rising about 4 feet a day, and on the morning of August 25 water began to trickle over the dam,” 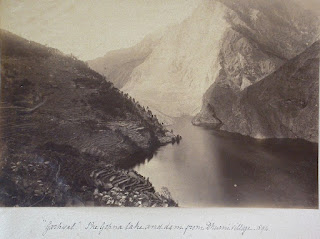 The local patwari informed the Government ( the Deputy Commissioner actually) after the incident that a “ mountain had fallen” . The DC ignored this missive as an exaggeration. However the District Executive engineer and the Surveyor who were touring the area investigated the matter and made a detailed report. As a follow up an Army engineer Lt Col, Pulford visited the place and opined that there was no immediate danger, but that sooner or later the dammed waters would overflow the dam and then there would be a huge flood in the valley of the Alakananda. Subsequently, T.H. Holland of the Geological Survey of India undertook the survey of this slide on 2nd March 1894.
There were sharp differences of opinion about what the consequences would actually be, But the Colonel’s recommendations were paid heed to and another Assistant Engineer from the Army, Lt Crookshank was sent to keep watch on the lake and to warn when expecting anything untoward took place. To enable quick information a special telegraph cable was laid up to the dam and observation posts were established at regular intervals from Chamoli town to Hardwar. Pillars were placed to mark what the expected danger levels of water were likely to be and the population was warned to remove themselves to above these levels once the warning was sounded. To quote the Gazetteer again: “In December, 1893, the area of the lake was about one square mile and its depth 450 feet. By July, 1894, the lake had become a large sheet of water, nearly 4 miles long and half a mile broad, and the level of the water had risen nearly 170 feet, while percolation was freely taking place. .V month later the water was rising about 4 feet a day”, The flow of pilgrims to Kedarnath and Badrinath was diverted and all the suspension bridges over the Alakananda were dismantled in anticipation of the flood.
Lt Crookshank warned on the 22 August 1894 that the dam was likely to burst in a couple of days. In the event he was absolutely right as the dam burst with a bang at about midnight of 25-26 august. About 10000 million cubic feet of water poured down the hillside and completely washed away Srinagar as Corbett has recorded. The Gazetteer again : “It was found next day that the level of the lake had fallen 390 feet, leaving a stretch of water 3,900 yards long with an average breadth of 400 yards. The depth near the dam was 300 feet, and the bed had already silted up about 85 feet. Immediately below the dam the flood rose 280
feet, but its height rapidly decreased as the channels of the rivers which
carried it off widened. At Rudraprayag, 51 miles away, the rise was 140 feet; at Beasghat, 99 miles, 88 feet; and at Hardwar, 149 miles, only II or 12 feet. The total damage caused to public property was valued at more than Rs. 95,000, but no lives were lost except those of five persons who insisted on remaining just below the dam. At Hard-war the head-works of the Ganges Canal were slightly damaged, but beyond this point the flood had no appreciable effect.”
Astoundingly only one family was lost in this disaster.
Following this, there was still a large lake here about two miles long and half a mile wide and covered 400 acres. This lake lasted till 20 July 1970 when another Alakananda flood was instrumental in draining the rest of the waters of the lake. Today the bed is a grassy bugiyal , very much favoured by campers.
This flood was reported world wide and even in the then backwater of Wellington In New Zealand, the Evening Post published on 28th August, 1894 wrote:
A WHOLE VALLEY FLOODED. I SPECIAL.] (Received August 28, 10 50 a.m.) Calcutta, 27th August. A dam at Lake, Gohna, in Bengal, burst and. a whole valley was flooded. The engineers, however, had foreseen the probability of an accident, and were watching the dam. Timely warning was given, and villagers to the number of 1000 were taken out of harm's way by special trains.

Reporting was no more accurate then than it is now!!

Niranjan Chandra Shah Jagati said…
How Corbett is connected with Gohna Lake I do not know However, I am presenting a true story of Corbett unrecorded so far.
July 9, 2019 at 10:09 AM

akdcts said…
can we have the story?