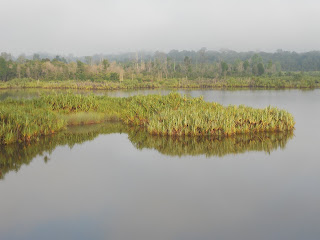 The heart of peninsular Malaysia is formed by the tri junction of several states, mainly the giants Perak and Pahang, Kelantan and Terengganu. The tri junction of the last three is occupied by the Taman Negara which has been the subject of one of my posts earlier. Outside this giant national park, much of the land has now been given over to plantations: palm oil and rubber trees stretch over hundreds of square kilometers, bringing wealth to the country and perhaps environmental doom too, if some environmentalists are to be believed.
But even here there are two lake systems that dominate, covering huge areas and giving a flavor of what Malaysia was before the coming of the British with their plantations. One of them is Tasik Bera (Lake Bera), which is Peninsular Malaysia’s largest freshwater lake system. I have visited Lake Bera earlier, as an excursion to complement our trip to the Temerloh Sunday market, but this time we plan to spend the night at the hotel there.
We start after a leisurely breakfast, my wife refusing to leave the bed before 7 am on the weekend. We have planned to visit the Gaur Wildlife Rehabilitation center before we go to Tasik Bera. The MMR 2 is our route to the Gombak exit and onto the East Coast Highway. Our spirits rise as it is a clear morning and we can see the hills separating the Eastern Coastal plains from the Klang valley rising up before us. The road winds over the mountains, the Genting exit is left behind, as is the Bukit Bintang exit. We pass the Raub exit and at around 150 km from our Bukit Jalil home we see the familiar Temerloh/ Jerantut exit coming up.
We will not go towards Temerloh immediately, but turn right at the route 98 towards Jerantut. Some 30 km later we turn off towards the Conservation centre on Route 1507 crossing the meter gauge railway tracks as we do so. The road is narrow, but extremely scenic and deserted, as we pass through rubber plantations past Jenderak Utara and then Selatan. There is a UMNO meeting scheduled here apparently, lots of flags and a smattering of a crowd which looks at our car curiously as we nose towards the Centre.
Disaster! There has been an outbreak of Foot and Mouth Disease and the centre is closed to visitors we are informed. The guard at the entrance is apologetic, he is sorry for us, but there is nothing to be done. We turn away from the pretty colony of the Rehabilitation Centre and drive back. 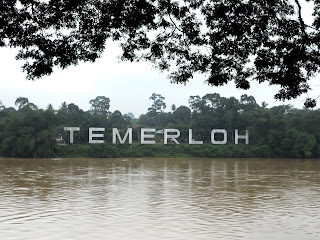 This time we keep driving down to Temerloh where we meet our familiar friend, the Pahang River. The Pahang River is Peninsular Malaysia’s longest river, coming from the Titiwangsa Mountains to cross the country to drain into the South China Sea. It was the principal thorough fare to Pahang in earlier days when the countryside was pristine rainforest. Today it is still majestic as it flows calmly down. The Semantak River joins it just at the Temerloh town but our route hugs its Northern bank right until the town of Bera. Here we leave the river to turn towards Tasik Bera. Miles and miles again of palm oil plantations, an occasional monkey most likely the cynomolgus monkey, also called the crab eating monkey, though it consumes no crabs.
It is almost 1 PM and we stop at a shady spot to have our lunch. Susmita has packed Biriyani, chicken Biriyani no less, and we tuck in hungrily, washing it down with lukewarm water. ( Memo: Must buy the cool box!)
It is now a short drive to the Tasik Bera Swamp Ecosystem area. The guardhouse is unmanned and we drive into the wooded wonderland that is the Tasik Bera Ecosystem. We drive slowly through the forest enjoying the myriad sounds of the forest. The insects, birds and an occasional rustle in the depths of the forest speak of much wildlife. A hornbill suddenly flies across in front of the car. We are unable to identify the species, but as we stop the car we can see it flitting from tree to tree as it enters deep into the forests. The last time we came we had found a dead water monitor on the road, its head smashed by the careless car or motorcycle which had caused the accident. 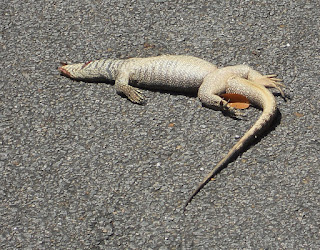 We come to the Interpretation centre. It is closed today, but we have seen it earlier, there are some nice exhibits, though a planned restaurant seemed to have closed. The garden however had a lovely pitcher plant which we saw for the first time after our visit to the Kew Gardens in London. The resort is just beside the Visitor Centre.