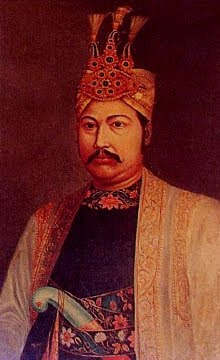 
It is not very well known that the early history of photography in India owes much to the rulers of the then kingdom of Tripura. Maharaja Bir Chandra Manikya, who incidentally was one of the first to acknowledge Rabindranath as a genius, was an accomplished photographer. He began to take daguerreotypes from the mid 1850s, but also moved with the times mastering the wet colloidion process and the platinum print as these techniques became available. He even started a Photographic Club in Agartala, his capital and held annual photography competitions in his palace. Bir Chandra was one of the greatest of the Manikya rulers of Tripura and was instrumental in the development of Agartala to a modern city and he also set up the Agartala Municipality.
He used to occasionally send examples of his work to the then imperial capital, Calcutta and in 1991, the Journal of the Photographic Society of India reported that it was lucky for the winners of that year’s competition that his photographs arrived too late to be part of the annual competition as he would have undoubtedly taken several of the prizes awarded to others. “They were all of high merit, exceptionally so indeed, and their execution reflect the greatest credit on His Highnesses’ skill as a photographer” it gushed.


Birchandra also influenced his son Samarendra Chandra Deb Barman, who was an equally avid photographer and was much acclaimed in those days. In fact he was probably a much better photographer than his father and took a keen interest in the photographic process. Known as Bara Thakur, he was a skilled chemist who modified existing chemicals to prepare photographs which would not be spoiled in the special damp and hot conditions of Tripura. He also read scientific papers on the photographic process in the meeting of the Bengal Photographic Society and won many medals both in India as well as in England for his superb photographs.

( Based on Maharajas as Photographers: Vidya Dehejia: in India through the Lenses. Smithsonian Institute, Washington,2000)

Tino Best said…
There are a few things that any tourist on India visa should know before he or she embarks a train. indian visa online