The Tomb of David Hare 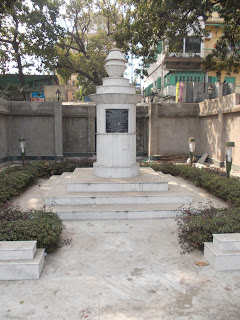 David Hare was instrumental in the development of education in India and more particularly in Calcutta. Institutions which he, among others was instrumental in founding and nurturing in the early days include the Hindu college ( Presidency College), the present day Hare School and of course, our very own Medical College. 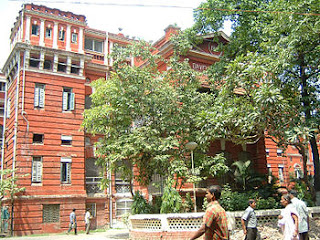 The David Hare block in Medical College where I have studied, worked and lived for more years than I care to remember.

As the first Principal of the college has testified, he was its first secretary and literally spent much of his time counseling students, sorting out problems and encouraging the Hindu boys particularly as they were breaking all manner of caste taboos in order to do dissection. The story of Madhusudhan Gupta and his colleagues who broke these barriers in order to start modern medical education in India and Asia is well known. Let me quote Dr Barmley as he wrote in a letter addressed to the Government:

"I do not intend to dwell upon my difficulties, but it is necessary for a full comprehension of the subject that I
should allude to them, and I feel it my duly to do so in a somewhat marked manner in justice to him through whose
Instrumentality, chiefly, they were surmounted. This zealous coadjutor and invaluable assistant was Mr. David Hare. Scarcely had the order of Government for the institution of the College appeared, before this gentleman, prompted by the dictates of his own benevolent spirit, having ascertained the objects of the undertaking and becoming convinced of the vast benefits likely" to accrue from it, immediately afforded me his influence in furtherance of the ends it had in view.
( not just the students)but the patients received his particular attention. He was so naturally kind hearted that he felt anxious as to the recovery of the patients and therefore daily noted the improvement of their health. Hare's diurnal inspection was of searching nature. The first thing
he did was to go through the register of attendance,to make out a list of the absent boys, to see the different classes and watch their progress, to hear
what the teachers and boys had to say, to encourage ( them)
"His advice and assistance have been to me, at all times,most valuable ; his frequent attendance at the Lectures, and at the Institution generally, have materially tended to promote the spirit of good feeling and friendly union among- the pupils, so essential to the well-working of the system,nor must I omit to mention, that his patience and discretion have animated and supported me under circumstances of peculiar difficulties which at one time appeared to threaten the very existence of the Institution, In truth, I may say,that without Mr, Hare's influence, any attempt to form a Hindu Medical Class would have been futile, and under this feeling I trust I bespeak the indulgence of the Committee, in availing myself of the present opportunity to record
publicly, though inadequately, how much the cause of Native Medical education, owes to that gentleman, as well as the extent of my deep obligation to him personally," 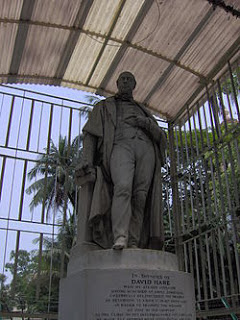 Statue of David Hare in front of Hare School.

David Hare died of cholera, which was then common in Calcutta and could take off a man who was hale and hearty in the morning by that evening itself. In his case, he probably contracted it from a student who he was nursing and to quote a contemporary account:
On the 31st May 1842, Mr. Hare had an attack of cholera. He was not frightened in the least degree.He said to his sirdar bearer "go and tell Mr. Grey to prepare a coffin for me." The sirdar bearer did not take the message to Mr. Grey. Inspite of medical aid, Hare died the next day, telling Prosonna Mitter, a sub-assistant surgeon not to apply the mustard poultice again, as he wanted to die peaceably.

The Bengal Spectator wrote:
“We have to announce with the deepest sorrow the death of this philanthropist and benefactor of the Hindus. He was attacked with cholera at I o' clock
on the night of the 31st ultimo and breathed his last at about 6 o' clock p. m. On the 1st Instant at the age of 67 years. The intelligence of his death was so sudden that it actually thunder-struck many of his native friends. 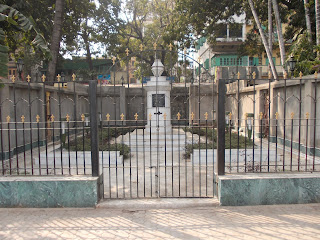 The Day was inclement. There was possibly a cyclone, but this did not deter his students and colleagues from gathering at his residence and his funeral procession was one of the largest that had been ever seen in Calcutta; 5000 men followed him to the site of his internment. He was buried in close two College Square where he still lies, (See picture, taken in January 2013).

I add two contemporary accounts of his funeral.
"On the 1st June 1842, Mr. Grey's house, (where Mr, Hare lived and died) was full of Hindu gentlemen, among whom were Rajah Radhakant, Baboo Prosono Comar Tagore, Baboo Russomoy Dutt and many others, Baboo Prosono Comar Tagore had made arrangements for Mr. Hare's funeral.
As soon as the Reverend Dr. Charles arrived, the procession moved- Several mourning carriages were full of children, and about five thousand Hindus, all sorrowful, sobbing and weeping, followed the hearse. The day was a very wet day, but it did not interfere with the large gathering unknown in this city."

As Govindo Chandra Dutta accounted, much later at one of the annual meetings that were organized yearly on his death anniversary ;

Hare's funeral. —
I have a vivid impression of Mr. Hare's death. He was then a Judge of Small Causes Court and a colleague of my father. I saw the corpse thrice during the day and accompanied the funeral cortege.
There had been showers during the day, and the streets were partially covered with rain water. There was a cyclone the day after, was there not? The
hundreds and hundreds of people, clerks from their offices, school boys from the educational institutions, native gentlemen, sircars and servants, and his own countrymen { but these were few ) — of the vast crowd that wended their way from Hare Street to College Square! I was too young to press through
the crowd and stand by the grave, I only remember the long procession, and the people gazing from tops of the houses and from the windows as it passed by.
When I found at College Square that I could not penetrate to his coffin, I went to the Sanskrit College, and ascended up to the roof whence I (quite alone in my glory ) had a magnificent bird's eye view of the whole scene, — a sad mournful scene but not without its lessons.

Today the tomb is well maintained. Again, I am ashamed to say that I noticed it for the first time this January when I was in Calcutta. However I was happy to see that it care is taken to keep it clean and tidy and I was informed by my friends that David Hare is remembered every year on his death anniversary. 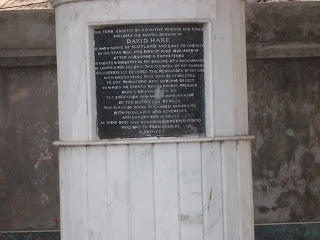 SoahamT said…
Sir,
I am a student of Medical College and I am writing an article on David Hare for Rupantar, our annual magazine. Your blog post has been a great help to me. The part you have quoted from Dr. M.J. Bramley' s letter, I have got some part of it from 'A Biographical Sketch of David Hare' by Peary Chand Mitra, except the "( not just the students)but the patients... to encourage ( them)" part, to be precise, and I would like to read the whole letter and quote from it. I would be very thankful to you if you mention the source from where you have got the excerpt.
Thanking you,
Soaham Taraphdar
August 13, 2015 at 11:44 AM

akdcts said…
Soaham,
Please send me your email Id. I will check and let you know. I cannot remmebr offhand, but will have to check my records.
regards
akd