The New Heir to the English Throne: Some Thoughts The Duchess of Cambridge has had a son.This is no ordinary son, but the future heir to the English throne. I have no doubt that this was a joyous occasion for the family to which he belongs, as any birth is to the family in which it occurs. However this birth was preceded by long and intense speculations about everything from the unborn baby's sex to the size of the would be mother's baby bump and its implications. While Indian newspapers were to some extent restrained in their reporting, the Malaysian newspapers and TV were nauseatingly feudal in reporting the event as if it was an earthshaking event. It amazes me to relapse how well the English upper classes have sold themselves to the world. They are in actual fact, a parasitic set of families which have looted the world's resources for well nigh 3 centuries until the Second World War ended their depredations,but they still rule a significant part of the world's imagination. It is amusing, but also a trifle irritating to hear a Chinese couple animatedly discussing the naming the baby in the Kuala Lumpur LRT. There are lessons for those work in brand building and public relations from this continuing success in selling their Royal brand, but to most sensible people, it seems astonishing that this fascination with so called royal blood should persist, and that too, after two generations of English royals whose morals were worse than alley cats and whose sexual and other peccadilloes have been exposed time and again. They are famous for being famous it appears, just like Paris Hilton.
However it is gratifying to see that even in London there is skepticism about their so called contributions to British public life. I am quoting, from the magazine Strike : 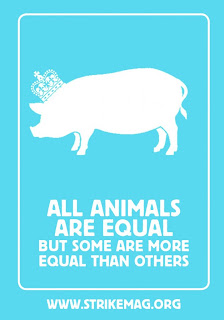 Princess pig laid a piglet! And one day the little piglet will be a King pig himself: divine right and descendancy are how we choose the head of our farm, because some animals are more equal than others. Oink-oink, what?

Be the inferior to no one, nor of anyone be the superior’ - William Saroyan

Lots of people say, ‘oh, leave off the royal family, they do a lot for charity, y’know?’. If I was an unemployed multi-millionaire, I’d do a lot for charity, too. Many fine people do work for charities: almost all manage to get in everyday without the aid of a chauffeur. That the royal family are themselves a charity should negate any charitable work they do; why not cut out the middle-man and give the cash straight to those in need? This might avoid parties, palaces and peacocks being skimmed off the top.

‘Yes, but what about the tourism, man? Don’t forget the tourism!’ It is as absurd as it is insulting to the entire nation to suggest that people would not visit our green and pleasant land without the Windsors – that the entire sum of our cultural worth resides in the crown and its cronies. France doesn’t have a monarchy, but plenty of people go to Paris to see the Louvre. I hear the food’s half-decent, too.
slavery?
We Brits love democracy. We’re mired in misadventure all around the globe, obliterating foreigners and putting our sons and daughters in danger, in its name. Yet in our own country, we’re happy with having a picture on our stamps and sterling of a lady who believes she deserves to be there by divine right – because God said so. And simply because, for as long as we care to remember, it has been so. Doesn’t democracy deserve better?

Isn’t it time for a re-think?

If that is what at least one section of the British public is thinking, perhaps we should at least be able to ignore them? Or have even 65+ years of freedom been unable to shake off the effects of 200 years of slavery?