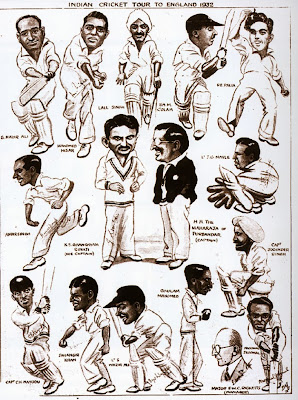 England, in their first representative match in this country with India, gained a fine victory shortly after four o'clock on the third afternoon by 158 runs. Before that result had been achieved, however, the home side, particularly on the first day, experienced some anxious moments. Actually, on the Saturday, they cut a very poor figure. Indeed, the manner in which they began called to mind the all too frequent failures in recent years of England at the beginning of a match against Australia.
On paper, England looked to be particularly strong in batting. The dropping-out from international cricket of Hobbs had placed the selectors in something of a quandary as to whom to pick as opening batsman with Sutcliffe. Recourse was therefore had to Percy Holmes, Sutcliffe's regular partner for Yorkshire. This on the face of it seemed something of a retrograde movement seeing that it was 11 years since Holmes had been called upon for England. As it turned out, the experiment failed completely. England began in such disastrous fashion that in twenty minutes they lost their first three men for 19 runs and were all disposed of in another four hours for a total of 259.
As India in a poor light made 30 runs without loss at the end of the day - play being stopped for a quarter of an hour and finally ending at six o'clock - the visitors may be said to have had the best of matters. India failed to drive home this initial advantage and were 70 runs behind when an innings had been completed on each side, and, although the early English batsmen again gave a poor display in the second innings, India never really got on top and, left to make 346 to win, were disposed of for 187.
The turning-point in the game came after four wickets had gone down for 67 in the second innings of England. Then Jardine, who had batted uncommonly well in the first innings, and Paynter added 74 runs, and on the last morning carried their partnership to 89. That stand definitely gave England a commanding position which followed up by useful bowling enabled the home country to triumph.
It can be said at once that the Indian cricketers, and especially Amar Singh and Nissar, bowled splendidly, while from start to finish their fielding reached a very high level indeed. The team did not enjoy the best of luck, for Nayudu, who in the absence of the Maharaja of Porbandar and Ganshyamsinhji, captained the XI with no little skill, damaged his hand so badly when trying to catch Ames in the gully that he batted under a severe handicap in each innings, while Nazir Ali, on the first day, and Palia, later on, each strained a leg muscle when fielding, and had their value as bowlers completely ruined and their usefulness as batsmen very considerably diminished.
Nissar did fine work when on the opening morning he dismissed the two Yorkshiremen with the first and last balls of his second over at eight and 11 respectively, while the agility of Lall Singh cost Woolley his wicket when the Kent batsman went rather leisurely for an injudicious second run. It was at that point Jardine began his first good innings. He and Hammond added 82 runs in a hundred minutes but Hammond when 33 was missed at long leg, while after Paynter left at 149 Ames, escaping from being stumped before he had scored, helped to carry the score to 166. Jardine, who was then out, batted for nearly three hours, his defence being splendid all the time. He scored chiefly to the on, often by forcing strokes off his body in front of square leg. Still, he had to fight hard for every run. Ames and Robins added 63 in half an hour, Ames being the only man to show that the bowling could be hit. He had nine fours in a good display of driving. Nissar took five wickets, but Amar Singh bowled almost as well, making the ball curl in the air either from leg or from the off and causing it to come off the pitch at a tremendous pace.

At lunchtime on the second day, India had 153 runs on the board with only four men out, but afterwards there came a breakdown and actually the last six wickets fell in an hour for 36 runs. This was brought about by Bowes and Voce, but although the former took during this period three wickets for 17 runs he did not bowl really well and in the earlier part of the innings had pitched very short. Taken all round, the English attack did not look to have anything like sting of their opponents. The Indian batting before lunch was good without being at all exceptional. The King visited Lord's on this day, all the players being presented to him in front of the Pavilion. Nayudu was in for 80 minutes, playing the highest as well as the best innings, but owing to his injured hand he could not show his proper form.
When England went in a second time, Amar Singh bowled even better than before, and, as already observed, it was left to Jardine, assisted by Paynter, to pull the game round. At the close of the day, England had scored 141 for four wickets, and they never subsequently lost their grip. After a slow start Paynter batted very well; Jardine and Robins added 53, and Jardine and Brown 49, the innings being closed at half past twelve with eight men out for 275. Jardine, batting for three hours, altogether made 164 in the match for once out. His work and good hitting by Robins and Brown produced 134 runs on the third morning in 90 minutes. India fared so badly that they lost seven wickets for 108 but then Amar Singh gave a great display of free hitting, he and Lall Singh adding 74 in 40 minutes.
Incidentally Lall Singh , whose superb fielding and rear guard action was remarked upon by almost all those who reported on the match was from our good old Kuala Lumpur. I will write about him in a future post.