June 30, 2014
This is an intensely personal experience of Kolkata as she was 35 years ago. Written by Dr Susmita Dutta, Professor of Anesthesiology who has lived in Kolkata for many years and now lives far away.

How do I begin to tell the story of my love hate relationship with Kolkata, When I say I love this city, yes I do so from far, yet when I am there, I cannot but think of the day I would be leaving. It was not always like this. I arrived one fine morning after having completed my studies in medicine at the beckoning of my parents who had fixed up my marriage. My earlier relationship with this city was that of several short term visits to my grandparents’ house in Jadavpur. My grandparents had migrated from East Bengal, I think in the early fifties, and my first memory of Kolkata is the family bonhomie which surrounded us during our visits.
My father always said that the medical colleges of Kolkata, especially Medical College was one of the premier institutions in the country and whenever I passed by this institution during my book buying stints in College Streets in the late seventies; I would have an overwhelming desire to be able to work here someday. 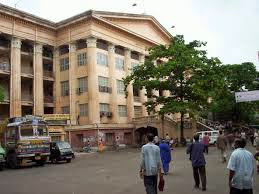 The Medical college Hospital
So here I was in Howrah station on a fine January morning in 1980, a young twenty three year old medical graduate, with dreams of doing greater good to people in a city I had secretly admired since I was small. I took a bus with my luggage and all and was astonished to be charged a mere 45 paise for a journey from Howrah to Salt Lake. This was my first personal discovery about Kolkata, she was cheap.
I don’t remember how I got my first house job, but my father had everything ready and the next day I joined as a fresh house man in the Ramkrishna Mission Seva Pratisthan. I was placed in Anesthesia, a subject in which I was a novice, and I still remember the enthusiasm of the consultants and senior housemen in teaching me endotracheal intubation, which I mastered in no time. When I think of my present day students learning the same on a manikin, I cannot but help feeling amused.
I started enjoying the bus rides from home in Salt Lake to the hospital and it was the beginning of my discovery of Kolkata’s roads, lanes, gullies,paras,temples,markets, saree shops and mainly the people who, cooked, bathed, ate, slept and worked on and by the streets of the city. I can still visualize the arrival of vast quantities of green coconut at particular street corners, early in the morning and their immediate dispersal.
Meanwhile I got married and now started commuting from Madyamgram by a medley of buses, leaving early, jostling to find a ladies seat and on one occasion, while returning after a night duty was robbed of a beautiful shawl, I was wearing. Of course those who heard about this commented that this sort of thing could only happen to me, what they meant was how could somebody just pick up the shawl from my body; my contention was, anything was possible in this city. Soon after by a trick of fate my house man ship in Ramkrishna Seva Pratisthan was terminated and I was given a letter of introduction to Professor Pramanik who was the first Indian FRCS in Anesthesia and the head of Anesthesiology at Medical College. My joy at this peculiar happening knew no bounds and here I was going up the spiral staircase at the DHB block and my self -esteem and confidence grew overnight. I was offered a paltry 175 rupees in terms of money but a limitless expanse of learning material, and experiential learning. 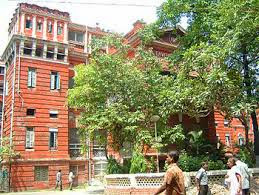 The David Hare Block, Medical College, Calcutta
The route of my daily commute changed and I was now to discover Maniktala market, Thanthane Kali Bari and the famous Kumar’s canteen where I had my first chicken kabiraji. It was funny conversing in Bengali throughout the day whereas my earlier life was spent outside Bengal conversing in English and Hindi.
I was called- Didi by all and sundry, the nurses, the house surgeons, ward boys and sometimes by much older consultants as well. This felt funny, also the fact that I had to wear sarees at work and home.
One night during my schedule at the Emergency operation theater at Casualty block, I was introduced to the haunting melody of-‘emoni barasha chilo she din’ and Feroza Begum. Before this, I think that the only Bengali song I knew by heart was’ jibone ki pabona, bhulechi se bhabona’ and when I mentioned this to one of the house man, he simply laughed and laughed and I realized the shallowness of my knowledge of Bengali music. It was an overwhelming experience working throughout the night, first hearing the tram bells fade around midnight and again a fresh peal starting early in the morning. 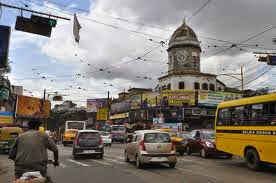 The Maniktala Market
One evening, arriving for my night duty, I was to work with a new medical officer, who was spending her birthday in the OT by herself, and she shared a piece of a particularly tasty chicken dish with me and this was my first acquaintance with one of my best and long lasting friends to date. We had a common connection- Nagpur, the city of her birth which she left at a young age to study medicine in Medical College and the city I had just left and where I had studied medicine. Dr Sudipta Mukherjee works today at the KPC Medical College.
As days passed, I explored New Market and contrary to peoples talk about the place being expensive, I found it a very endearing place and do to this day. I got hooked to Nahoum’s pastries and all the birthdays of my children which were spent in Kolkata had cakes from Nahoum. Park Street and its restaurants was another delightful place though I regarded Flurys as expensive and over rated.
My first puja shopping was an elaborate affair as I had to buy gifts for all and sundry and it was the first time I was exposed to the zeal of Kolkata shoppers who jostled in the streets, braved traffic jams, stood in buses with heavy bags, sweating out in the post monsoon heat. After the first months of my honeymoon with Kolkata I started detesting the traffic jams and the load shedding which became a part and parcel of my life. Another thing that bugged me was the ‘michils’ and street corner speeches which brought the city to halt literally for several hours.
The first year of my stay ended with the death of my father at a relatively young age of 58. I remember that cursed night when we got the news over the phone and waited for dawn so that we could travel to the Command Hospital to bring the soldier home. I was no longer a young twenty three old now; I was twenty four and the guardian of the family with my father’s death.
Now in my late fifties I still visit Kolkata for short terms missing it, hating it, loving it, feeling sad for her, feeling happy for her, living with it , dying with it. How can I not do so to the city which holds the grave of my infant son, the house that my father built and we enjoy, the city where my children were born, where I discovered love and a lot of sadness? How can I be indifferent when people stop me twenty years after leaving and say-‘Didi chinte parchen, kemon achen.’, fishmongers and vegetable sellers ask me-‘ebar kotodin thakben’. After having seen the world and enjoyed living in other places, I cannot come and stay here forever but I will keep on coming until the day I hear no more-abar kobe ashbe.