A Tale of Two Cinemas by Gautam Bhaskaran 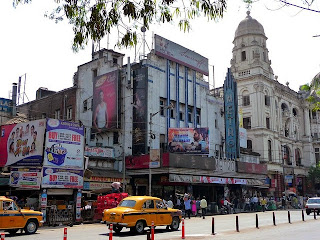 This article is sourced from The Gulf Times. Some more Calcutta nostalgia!!


Once upon a time in Calcutta going to the pictures was a delightfully leisurely, pleasurable outing. Families packed food, left home well in time for a film, often got into an ambling tramcar and reached the theatre. Cinemas had beautiful lounges with finely crafted woodwork, richly upholstered sofas and sometimes cafeterias that served the choicest of eats.

I remember Bijoli in the Bhowanipur area that dished out absolutely delicious cutlets. There were also some theatres that had a bar and one could down a few pegs before watching Gregory Peck in the Guns of Navarone or Cary Grant run for his life in North By North-West or Grace Kelly meet her lover in Rear Window.

One among Calcutta’s legendary cinemas was the Metro in Chowringhee that was as great a landmark as the city’s impressive Victoria Memorial (housing British artefacts) or undulating greenery called the Maidan or imposing Howrah Bridge which served as the setting for innumerable movies.

The Metro was owned by Metro Goldwyn Mayer, and it invariably screened the latest hits from the production house. Who could ever forget the lion that roared a welcome before the start of a film. I remember watching movies like Ben-Hur and The Ten Commandments at the Metro. An elderly friend of mine reminisces her days at Calcutta when she and her husband would ride a tram to the Metro to watch some of Hitchcock’s eerie and not-so-eerie thrillers.

The Metro, of course, took pride in showing only English films. It was, in that respect, part of Calcutta’s hoi-poloi (call it uppity, if you may) crowd, which invariably turned up in chic clothes and with an air of, well, British nobility!

Designed by Scottish architect Thomas Lamb in 1934, the Metro opened in 1935 with Way Out West, and it remained the most modern hall in the city till the Lighthouse came up 10 years later. The Metro — with its grand cloak room, a plush lounge bar, mirror-panelled walls and its life-like portraits and rare photographs of Hollywood stars like Marilyn Monroe and Ingrid Bergman — was an epitome of entertainment in colonial Kolkata. The theatre remained as glorious even years after India had attained its independence and the last of the British had left the country.

The Metro retained its glory post-independence. Director Goutam Ghose recalls that his Paar ran for 200 days at the Metro, a place he had always felt close to his heart. It was a great honour for him.

But Paar also signalled the end of an era for the Metro. As one of the few stand-alone theatres in Calcutta, it fell into bad days and was reduced to screening Bollywood potboilers. Now, the Metro, which has been taken over by the Ambani’s Reliance MediaWorks, has been closed down for renovation. It could open in about a year’s time, but in a multiplex avatar. It will certainly have two screens, if not more.

I am told that it will be re-christened Metro Big Cinemas, and since the building happens to be part of history and heritage, the façade will remain as it was years ago. But, I suppose the interior will get a brand new look, maybe modern and sophisticated with those chandeliers and ornamental lamps as well as magnificent wooden panels disappearing into the pages of history, the history of a cinema renowned for its classics as it was for serving as a rendezvous for young people.

As is always the case with any change, some rued the loss of a great piece of Calcutta’s past. Others hailed it as imperative as the march of what was Job Charnock’s mid-day halt into Calcutta – and later Kolkata. Even the city’s hue has changed from the red, the predominant colour of the Marxists who ruled Kolkata and the state of West Bengal for three decades, to the current blue, the now ruling Trinamool Congress’ tint.

Architect Dulal Mukherjee, who drew up the blueprint for the new Metro feels that it is possible to keep the mood and ambiance of the cinema while modernising it. His plan includes the establishment of four theatres with a two-tier car parking. But what will eventually emerge from the hallowed premises of the Metro, nobody can say with any certainty now.

The transformation of the Metro is also the story of many other stand-alone theatres in India. However, some have resisted this change, preferring to remain “single” and not “mingle”.

The Basusree cinema in South Kolkata is one such classic example. And interestingly and incidentally, my home in Calcutta was the theatre’s neighbour. Last year, when I visited the city, the Basusree stood as majestically as it had decades ago.

The Basusree is a sprawling cinema hall on whose screen I watched some of the most lilting fantasies of the age. If a Shammi Kapoor “yahooed” with Saira Banu on the snows of Kashmir, there was Joy Mukherjee rickshaw-pulling Sadhana on the ups and downs of Shimla. Waheeda Rehman’s ghostly song on the moor to allure Biswajeet (not Baskerville of the Arthur Conan Doyle fame) haunted me all right, but I grew up at a time when cinema lit up our minds with a spirit of positive pleasure.

As did so much else. Even those eking out a precarious living outside the theatre — by, for example, selling puchkas (golgappas) or jhal murhi (flattened rice) or chanachur (mixture) — seemed to have a song in their stride. Maybe, the Devanands and Asha Parekhs who played out fantasies just yards away from these poor hawkers exuded an infectious charm.

Yet, despite the unbelievable and what appeared like the unattainable, movies made bold statements against societal prejudices and injustices. Care for orphaned children, the strength to follow the dictates of love, and compassion for the weak were ideals that were woven into the scripts in such an innocuous manner that one hardly felt like being lectured upon.

As the frames flashed by inside the darkened auditorium of my neighbourhood cinema, life outside rode by — sometimes on the frail shoulders of the old man who sold on the pavement below my home the most intricately moulded miniature clay birds. There was a variety of them, which “flew away” by dusk to their new nests. Some stayed on with the man in the hope of a better morrow.

On some other days, Satyajit Ray’s monkeyman would appear in a three dimensional form to keep us absorbed in an endless array of tricks. But when actor Rabi Ghosh or star Uttam Kumar or director Mrinal Sen walked into the theatre to catch a glimpse of Sonar Kella or Come September, my day was truly made.

It may not have been different for those who lived by the Metro.
Cinema halls Kolkata