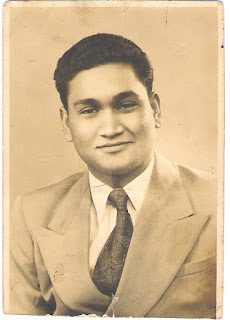 Baba as a young man
What can you say about an 86- year old man who died?
That he was a good husband and father, he loved his grandchildren, he lived a long life and now his allotted span has ended.
My father died last night. They say that you never really become adult until your father passes away. In that case I am finally an adult at this ripe old age. It is clichéd to say that an era has ended, but that is exactly what has happened. He was the last surviving member of his generation of a family that boasted 10 siblings. He belonged to a time when fathers were firm, stern and heard. His idea of parenting was a model had probably passed its sell by  the time he became a father, but nobody told him. We, my sister and I, loved him, but were scared of him almost in equal measure during the days that we were growing up. But as I grew to adult life, I could see him more a person, a man who had his faults and his strengths, who did good most of the time, but sometimes did things he could perhaps have avoided, who was loving and stern in equal measure: who was, in fact a man like any other: no saint, no sinner, but a human being warts and all.


My father was born in 1929 in Nagpur which was where my grandfather, who worked in the All India Audits and Accounts Service  was then posted. He was brought up however in Berhampur, Murshidabad. He was inordinately proud of his hometown and always insisted that it was the best moffusil town in Bengal. After doing his schooling and ISc there, he joined the marine services and later joined the Calcutta Port Commissioners as it was then called. I remember him as the captain of his ship, striding the deck as a master of all he surveyed.
He dominated our family. He was the definite pater familias and we were unable to get a word in edgeways. In time I rebelled, but of the time when I speak he was the strict, but kind leader of the household . We looked upon him as the lead whenever any trouble loomed  and he never failed us.
I now realize how difficult it must have been in those days to bring us up. Those were the days when Government officers were gradually losing their primacy. Those who had an elastic conscience made up for a loss of influence by turning to corruption. But for people like my father, the slow but steady erosion of status and power was baffling and I think that he never really reconciled himself to the new dispensation where over the seventies and eighties when money earned by whatever means seemed to be the only criteria of worth.
My father was simple minded in many ways. He could be cheated out of many things which were his right and was. But his biggest quality was his ability to face whatever life threw at him and to accept it. I can never forget that he accepted my divorce and remarriage though it went against the grain of all that he held dear in his world view. He proved to me that his love for me was unconditional; I wish I could say the same.
He loved my mother with a devotion that did not change in 60 years. In our short half life romantic invovement days, it is difficult to imagine how much he loved and depended on my mum. There was nothing that he ever did that she did not influence, it was a love story that endured and only death could end. They had celebrated their 60th anniversary this February.
His last years were unfortunately spent in the grips of Alzheimer’s disease. He was bedridden; he could not even recognize us. However the smile that could really light up his face endured and suddenly he would smile and it would be the Baba we knew, we loved and respected.
They say you never become an adult until your father dies. Baba, you are gone, I am now adult. I wish I had died as a child.
My father Obituary

Anonymous said…
Beautifully written. My condolences on the passing of your father.
January 10, 2018 at 11:04 AM