Here be Dragons: a Visit to the Komodo National Park, Indonesia Part 1


I am blogging after almost a year's break. Sorry for the interruption as they used to say on Indian TV in my younger days. I hope now to be regular in my updates.


It was in the eighties that I first saw the Komodo dragon in a David Attenborough documentary in Doordarshan, then India’s only television channel. I am not sure which series it was. It was perhaps “Wildlife in One” or maybe it was not; no matter. The point is that the sight of these ‘dragons” captivated me and since then I nurtured what was then an impossible dream of seeing these animals somewhere: perhaps in a zoo? It never occurred to me in those pre liberalization days that I may be able to travel to the Komodo Island to see the dragons in their natural habitat. When I came to Malaysia, I realized that it was within the bounds of possibility that I may be able to make my dream come true. But it was only this year that my daughter who lives in Singapore planned and organized the trip of which I am writing today.
I drove down to the KLIA 2 in a state of high excitement. My plane to Bali was at 3.35PM, I was to meet my daughter who was flying in from Singapore. We would spend the night in Bali and then travel to Labuang Bajo, in the magical island of Flores before setting out for the dragon islands. Coming to Indonesia is always like coming back to India. The crowds, the controlled chaos, the good humored acceptance of delays and difficulties: it is India in an exotic setting. One good thing is that we Indians, who are excluded from most countries without having to procure a visa under stringent conditions, are welcomed without a visa. In my early travels I had to get a visa on arrival (and spend 25 dollars), but now it is a visa free entry.  We took an (overpriced) cab to our hotel in Kuta and set out to make the most of our few evening hours in Bali. We did not do much, but we ate a satisfying meal at a food court and went to bed as we had an early flight to catch next day. 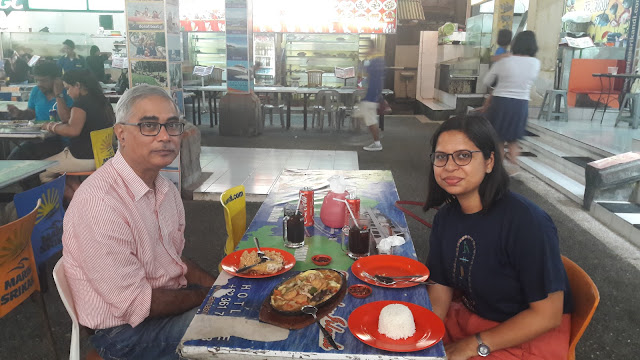 Having a satisfying meal at Bali


Indonesian aircraft are notorious for their very casual attitude towards their published schedules, but for once the plane was on time and we flew east over Lombok towards Flores. Flores, some may remember is that island that shook many theories of human evolution to their foundations when the so called “hobbit” was discovered here. Now accepted by most as a species of Homo (H floresiensis ) there was much debate when they were first discovered , some paleontologists suggesting that they were actually modern humans suffering from thyroid  disease. However this find was in the hills of central Flores and we were to land in the western end of Flores. The emerald green Flores Sea lay below us as the plane descended and a bumpy landing later we were in Flores.
As we came out of the strictly functional airport, we were met by our guide Ben, short for Benjamin . Benjamin comes from a village in the mountains but now lives in Labuang Bajo with his wife and two daughters. He proudly informed us that his wife was expecting a son on the 11th May (no penalties here for radiologists revealing the sex of the unborn, no market for the killing of unborn girl children either in this eminently civilized society). A short car ride brought us to the harbor where myriad   boats were moored, mostly fishing boats and tourist vessels. There was a sumptuous looking yacht too, as well as a container ship from Surabaya. 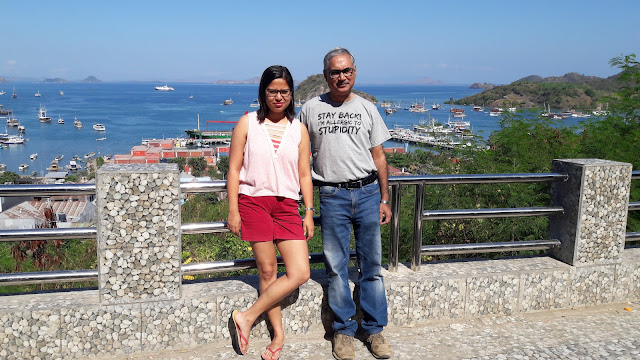 The harbour at Labuang Bajo

Our boat was anchored a little away from the shore and we had to take the dinghy to reach the Marco Polo Red which was to be our home for the next two days. It was a trim little ship. It could carry a complement of up to 10 passengers, even 12 at a pinch, we were told. Shreya (my daughter) was doing us proud and we had hired the whole thing for a private trip, so that we were the only passengers. We were introduced to the ship’s captain, Marcus, and his two assistants and to Effy who was going to do the cooking. Not bad, I felt pretty pampered and rich! 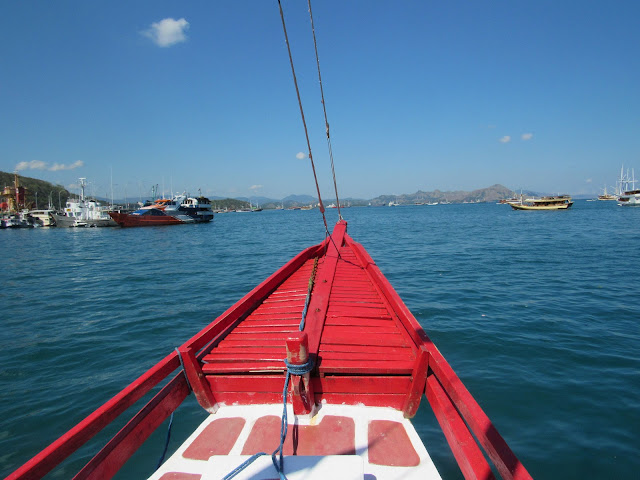 All set and ready to go

The boat had cabins in the top deck where we were to sleep. There was another cabin, now unutilized and a living area of sorts where one could watch a movie on a CD player. It beats me why anybody would want to; I think the only people who really utilize this place are the crew, in between trips. There was an open area in front where one could lounge and enjoy the view and the sea breeze. Not 5 star luxury perhaps, but a lot more that I was really expecting. In the lower deck, there was an open area where there were benches lay in a sort of semicircle and a table. This was where we spent a lot of our time and ate all our meals. 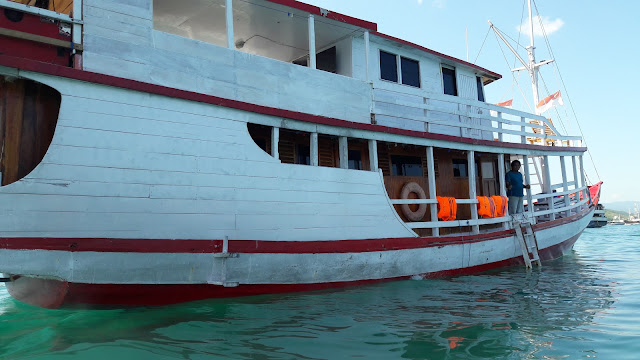 Our boat : the Marco Polo Red

We set out without too much delay as were to reach the Komodo Island first. This would take about 4 hours we were told. On the way be sailed past the azure sea to the open blue ocean and past myriad islands. The islands here, unlike those around the Malaysian peninsula and the Borneo Island were not thickly forested. They were mostly grassy, a sort of savanna. There were trees, but in the valleys not covering the entire island we have become used to seeing nearer home. Ben told us that this is because of the winds which blow very strongly in these parts. Rain is also confined mainly to the monsoons and it does not rain so much all throughout the year as we are used to seeing in Malaysia. The trees also looked familiar, lots of Ficus species, bamboo and the ubiquitous coconut palm.
Much earlier than we expected, lunch appeared. The food was Indonesian , rice as the main dish and lots of sides. An egg curry, fish, three different types of vegetables and finally fruit for dessert. We initially wondered who was going to eat all this food, about a half hour later we were left wondering where the food disappeared.
To be continued .
Flores Indonesia Komodo Dragons