But these were as trifles. The weather was delicious: cool, but not too cold, the sun was pleasant and the Red Silk cotton was in bloom. Of the flowers which make the Bengal spring so delightful, the red silk cotton is perhaps the first to flower. The trees are totally leafless but the blood-red blooms are on every branch. The space below is often carpeted with red and the flowers are powerful magnets for a large variety of birds. On or two “madar” trees were also blooming I noticed, but the palash trees, not so common In Howrah District, were yet to blossom. There is something that makes me very nostalgic when I travel by a local train, or more specifically by the EMU coaches. It reminds me of many journeys made in my childhood to Krishnanagar to visit my grandparents, of journeys, made just to see the green fields when we tired of Kolkata and of our journeys to small stations in Jharkhand and Purulia with our rucksacks en route to a camping holiday. 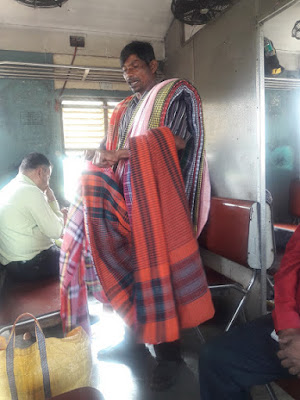 Hawkers are a ubiquitous presence in local trains. To many, they are a nuisance, but I love ‘em. The compartments are full of young men and not so young men and some positively old men hawking such a wide variety of snacks, knick-knacks, sweets, costume jewelry, home remedies, fruit and everything else that can be transported in a bag and dragged onto a train. Many of them are marvelous salesmen and their spiel often lures the unwary into spending money on articles that they will never use. This does not really matter because the prices are so low that it is difficult to be cheated out of more than ten or fifteen rupees. And you can buy a variety of things which are very useful indeed. From ball point pens, safety pins, hairclips and stain removers, there is no limit to the variety. In this journey, we had our eyes on the food. There were singaras, alu ( potato) chops, all sorts of fritters and you could buy a box of sohanpapdi for just Rs 15. One man especially caught my attention. He was making a strong case for a “Babusona’s” gamcha . Each for Rs 40. It seemed quite a bargain and in fact, Swapanda decided to buy one. His sales talk was mesmerizing and it was no wonder that he made several sales in our compartment alone.

We were in Kharagpur by about 12 noon and then we deviated from the usual Mumbai or Chennai route towards Midnapur. Soon we were crossing the Kangshabati River which here was fairly wide and full of water and ten minutes later we were in Midnapur. It was lunchtime and as everybody knows one feels twice as hungry when traveling as one does in normal times. Just across the road from the exit from the station was a plethora of eating joints. Not of the cleanest, but in this sort of travel, you cannot be too particular. What was amazing was that you could have a basic vegetarian meal for Rs 20, if you added on an egg curry, you paid Rs 30 and a fish meal would set you back by Rs 40. So I set aside my trepidations and we tucked in at the Sarbamangala Hotel. I forgot to say that this meal came with papad and chutney free!

Midnapur is fairly old town. I had never visited it earlier; I am not sure why because I have come to Jhargram and very often to the adjacent Purilia and Bankura districts where we used to have nature camps and rock climbing camps every winter.  It was the district town for the Midnapur District which was one of the largest in West Bengal. Now, of course, the erstwhile Midnapur District has been trisected. There is East Midnapur which is mostly the riverine and coastal part and West Midnapur and Jhargarm which are more forested and formed part of the so-called Jangal Mahals in the Mughal era, though mostly it comprised Purulia and Bankura as well as parts of what is now Jharkhand.

West Midnapur was part of the frontier between the the Maratha territories, more specifically the areas that were controlled by the Balasore Fauzdar of the Maratha administration and they, in turn, reported to Cuttack and then to Berar. In the later years of Mushid Quli Khan’s administration of Bengal, this area was difficult to administer and the local Zamindars had for all practical purposes become independent. However with the Diwani of Bengal passing to the British, they took measures to control the area and finally set up new administrative structures. These were, however, modeled on the Mughal structures which had been present since Akbar’s time and in fact this area was the route by which imperial troops from Maghadha had marched to subdue the Kingdom of Kalinga during the famous invasion by  Ashoka the Great.
Our plan was to explore the natural beauty of these areas. There are many important archeological discoveries that are worthy of exploration, but we were not planning to visit those now. As I was saying Midnapur is an old town and maintains some of the charms of the old mofussil towns of West Bengal. Now, of course, it has developed considerably and has a Medical College as well as the well regarded Vidyasagar University. The role it played in the freedom struggle has been well documented but is not so well known that Hassan Shurawardy, later to become the Prime Minister of Pakistan also hailed from here or nearabouts.

Having lunched well, our first target was to visit the Gopeshwar Eco Park. We hired a toto and set off. The town as I said is pleasant,leafy and uncrowded. The route we took went past the Vidyasagar University. The campus is huge by Indian standards and there appeared to be a mini forest inside as far as we could discern from outside the walls. Another college set up by the then ruler of Narajole, Raja Narendra Lal Khan is now an autonomous college and has a proud history of contributing many participants to the freedom struggle.
I realized that we were moving away from the town proper, and soon we were in forested land which became denser and denser until we came to the entrance of the Gopegarh Eco Park.