We awoke early the next day and at 5.45 AM we were abroad the bus from Chandrakona Road to Jhargram. This was to take a circuitous route, but what did we care?  Our bus was called the Black Panther and I was glad to see that the tradition of naming buses is alive and well in rural Bengal. I remember when I was posted in The Bamangola health center in Malda way back in the late ’80s, we had two buses named after two, (I presume) pretty ladies and nobody ever talked about the 9 AM bus but always said: “ I am going to Malda on the Jayashree.“ My wife informs me that when she traveled to Kalimpong where her Dad was posted, from Siliguri in 1979, there were two buses, one of which was the prettily named Red Rose. The Black Panther lived up to its name, tearing down the not so wide highways at an impressive pitch and not bothering overmuch when the road was not of the best. Fortunately, we were in the front of the bus just beside the driver. This gave us a great view and protected us from the worst of the bumps, but unfortunately also resulted in us clenching our teeth and grasping convulsively at the hand rests as the intrepid driver wove his way through sometimes fairly crowded passageways, seeming to miss sundry motorists, cyclists and pedestrians by a whisker. This was accompanied by occasional blasts of a polyphonic sound (I hesitate to call it a melody) from the horn. Our driver was a Subho, he lived in Chandrakona Road and did this 5-hour route twice a day, every day and had been doing it for the past 3 years. Hats off to him. One funny thing was that many stretches of road, even those that were more pothole than road, bore newish signboards proclaiming that the road was maintained by the PWD. If I were the PWD, I would have kept pretty quiet about this, judging by some of the roads we traversed.
The route was through various towns and villages with romantic names. Hoomgarh, Pingboni, Sarenga, Pirolgari, all redolent of the memories of brave warriors, mud forts and tribal culture. We crossed several major forests into the district of Bankura, then crossing the Kangsabati River to re-enter West Midnapur and finally to the brand new Jhargram District. Here as we approached Jhargram we crossed Silda of a certain notoriety (this was where a Maoist attack killed several Jawans of the security forces, not that long ago.) Soon after this, we were in Jhargram. I must not forget to mention the alu chops of Hoomgarh at the Burdwan Mistanna Bhandar. If you are ever there, please have it.

We were hoping to find accommodation in a Forest Department bungalow, but this was not to be; they were all booked or reserved only for officers on duty, so off we went to a budget hotel. It was clean and the chicken curry was delicious, but there was not much else to be said for it, other than its location close to the station. But here we stayed and then ventured forth to see Jhargram.
Near the hotel, I was pleasantly surprised to find a sort of mini procession of municipal workers who were apparently carrying out a familiarization programme for garbage sorting and disposal. Looking very neat and smart, with monogrammed aprons, they were visiting households and handing out leaflets which talked of the importance of proper waste disposal. Perhaps because of their labours, the town was a lot cleaner than we usually see in Moffusil municipalities.

Another change that I noticed was the much increased mobility of women. Schoolgirls all seemed to be cycling and this was true not only of Jhargram but also of every part of rural and semi-urban Midnapur that we visited. This was possibly because of the Government scheme that distributed cycles to all schoolgirls, and as I saw from a signboard near the municipality office, also now to the boys.  In addition, it was quite common to see young and not so young ladies riding scooties to the market, taking their children to school and no doubt going to their place of work. When we were in school, Kharagpur had the reputation of being a town where lots of women cycled; now it appears to have spread all over the erstwhile Midnapur district.
Totos are now the lifeblood of transport in smaller towns of Bengal. So a toto it was; we hired a young man to take us to  first to the Jhargram Palace and then to the Zoo. The palace is closed to casual visitors as it has been turned into a heritage resort, which if the Trip advisor is to be believed, has very poor service and maintenance.  The Malladeb royal family originally hailed from Rajasthan and came this way at the vanguard of Emperor Akbar’s all-conquering army in 1570. The original founder of the dynasty was Raja Sarvesh Singh and the family still survives and in fact, lives in the upper floor of the building.   After defeating the local ruler ( Mallas: thus Malladeb), they ruled here for 400 odd years. The present palace was built in 1931, as a mishmash of the European and Mughal styles. It is an impressive palace and is set on extensive grounds which, at least, are well maintained. We stood at the gate and stared our fill like the plebeians that we are and then dropped in at the Tourist complex nearby. This turned out to be a sort of reception office for the heritage hotel and occupied by rude and unhelpful staff. 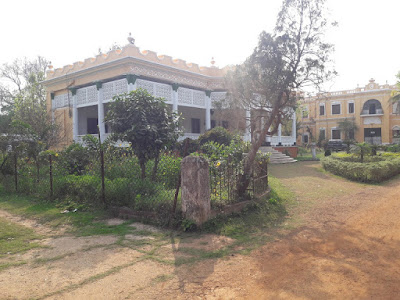 The Jhargram Zoo, or to give it its formal moniker, the Jungle Mahal Zoological Park was set up about 40 years ago in what was a patch of natural forest. Now it lies within the Jhargram municipality and is a lovely piece of woodland, not very well maintained. However, this added to its attractiveness as it looked pretty wild and not at all like a managed area. There were some lovely sal and teak trees and now that the leaves were all being shed, the forest floor was covered by a brown carpet. There were some displays of animals, Nilgai, a huge collection of deer, mainly cheetal, though there was some sambar as well. There are allegedly some of the wild cats including the less seen fishing cat, but they kept themselves well hidden. It was a pleasant place to walk and a fitting finale to our travels for the day.

siva said…
This is really a great Article for those who are looking for Discount coupons, cashback offers on online Mobile shopping sites in india.
Thanks for sharing the wonderful information and Save you huge money & time. More offers and coupons Visit

siva said…
You have done a great job. I will definitely dig it and personally recommend to my friends. I am confident they will be benefited from this site.
rizbuz
February 26, 2021 at 1:44 PM