The National Gallery of Modern Art 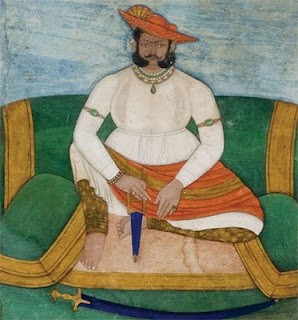 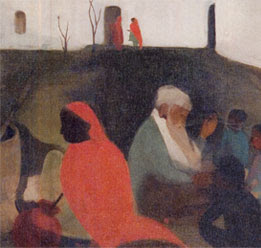 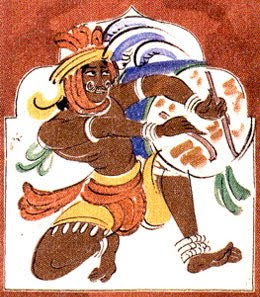 This time when I went to Delhi, I had a free morning which I spent in the National Gallery of Modern Art. I have wanted to visit it many times in the past, but somehow it never happened. This time I was determined to go and we went on the Saturday morning the day after we travelled up from Ranthambhore. It is conveniently located, near India Gate and it costs just Rs 10 to get in. It is a steal. Looking at it from a Malaysian viewpoint, less than one Ringitt takes you to one of the most marvelous displays of art in India.
India has always been at the forefront of art since the days of antiquity. The Mauryas, Kushans and Guptas have left behind some of the best sculpture ever created. However paintings from those times have obviously not survived. At a much later age the Mughals gave rise to the Mughal Rajput miniature paintings which according to one authority” is a remarkable synthesis between the imported tastes of the Mughals and the indigenous Indian sensibility.” We saw many paintings of this genre at the Albert museum in Jaipur. But to tell the truth I find these paintings clourful, but more like book illustrations than paintings as such. In fact I think most of these were created to be parts of the beautiful hand crafted books of those days rather than to hang on walls.
The birth of modern art in India owes a lot to the Bengal Renaissance. The cultural ferment that took place in the nineteenth century in Bengal as the locals came in contact with Western ideas also gave rise to the Calcutta School of Art which was the fountainhead of newer artistic conventions. Later when Tagore founded the Vishwa Bharati, Nandalal Bose founded an art school, the Kala Bhavan, which has to this day produced many of the doyens of modern Indian art. The so called Bengal school is not so highly regarded nowadays, but Abanindranath Tagore and his brother Gaganendranath began to breathe new life into the moribund Indian Art Scene. The sculptural tradition of India which was destroyed by the Muslim rulers on religious grounds (Islam prohibits the production of human figures) was revived by Ramkinkar Vaij in Vishwa Bharati. One of his monumental sculptures is in Delhi. Other painters like Benodbehari Bose (who was Satyajit Roy’s teacher) and Jamini Roy also changed Indian art forever.
In the twenties Amrita Sher Gill of mixed Indian and Hungarian parentage also began to change the face of Indian art. She was trained in Paris in the very home of the Western Art tradition and she inspired the school of women painters who are such an important part of the Indian art scene today. Unexpectedly Rabindranath Tagore who took to painting at the ripe old age of 69 produced some of the most powerful paintings of that era.
Post independence, F N Souza founded the famous Progressive Artist’s Group in Bombay. Together with Hussain, Ara, Gade, Bakre and Raza he dismissed the older painters as too sentimental and unsophisticated and tried to tie India to the global movements of Art. Of them Hussain is of course the most famous, (though why this should be still escapes me), but the others also made powerful statements. Satish Gujral, Bhupen Kakkar and others are also prominent artists who came of age in the post independence period.
I cannot pretend to have too comprehensive a knowledge of modern Art, but I loved the display at the Gallery. It is a modern gallery, the paintings are well mounted and well lit and it is possible to see them in an unhurried manner as the gallery is not usually too crowded. There are places where you can rest your feet and a shop where you can buy reprints and books.
I loved the paintings of Sher Gill and the Bengal paintings, especially those of Jamini Roy, Nandalal Bose and Benod Behari. I was also fascinated by the works of K G Subramanium and Aparna Caur. The collection of Tagore’s paintings are also superb and there were many new artists whose names I did not recognize but whose paintings seemed to be worthy of greater renown.
The building which houses this marvelous feast is the Jaipur House apparently the Delhi residence of the Maharaja’s of Jaipur and the grounds also have collection of sculptures which can easily be missed as there are a lot of railings and barriers tucking them out of sight.
Highly recommended if you are in Delhi!
Delhi Gallery India Modern Art

john said…
The blog you have posted has been very useful to me. It has provided me with all essential details about the Indian art that are available of late.

Sonica said…
Thank you for posting such a useful, impressive and a wicked article./Wow.. looking good!
Modern Art
January 28, 2011 at 11:20 AM