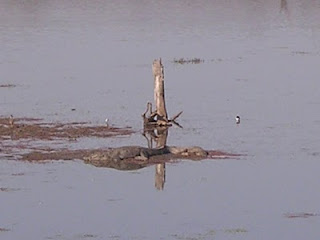 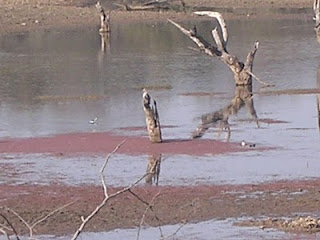 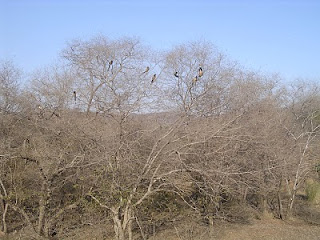 In medieval times the route to Central India from the North lay through a gap in the Aravalli mountains, south of Jaipur, or rather, Amber. To guard this route developed the fort of Ranthambhore. It got its name from its situation above the Tambhore hill. This combined with the adjoining Rann Hill gave it its name. It was built by the Chauhan Rajputs in the tenth century and became their refuge after Prithvi Raj Chauhan was defeated in the battle for Delhi in 1192. It was lost to Muslim invaders and then recovered by the Rajputs and has had a chequered history since. The last major siege took place in the last year of the sixteenth century by none other than Emperor Akbar. Later it was taken over by the Jaipur throne after the heydays of the Mughals and was with them till independence.
Today it occupies pride of place in the Ranthambhore wildlife sanctuary which it overlooks. Ranthambhore is one of the important Tiger Project Parks in India and it is one of the last remaining bastions of the Royal Bengal tiger. About 40 of the remaining 1411 (wonder where we got the figure) live here.
We reached Ranthambhore by train from Jaipur. There is a convenient Intercity Express that leaves Jaipur at around 11 am and reaches there by lunchtime. The station is built like a Rajathani haveli, the turrets a reminder of the martial traditions of the Rajputs. We caught an auto and were transported to the Tiger Den where we were staying. The road skirts the park and we could see several hotels which had encroached on the buffer zone. I remember reading about a controversy that rocked this place some years ago when prominent hoteliers were accused of encroaching on Forest Department land. They included some prominent wild life experts and conservationists, who, in keeping with Indian tradition felt that rules were for other people.
Be that as it may, the Tiger Den is a collection of cottages grouped in clusters, all fronting on a lush green lawn. One group of cottages fronts the swimming pool. The compound has been planted with trees and it backs onto a lovely guava orchard which alas was separated form it by a barbed wire fence. There is a bare plain in front of the resort and this ends on the road that leads to Madhya Pradesh, and beyond this the jungle starts. The vegetation s mainly dry deciduous, but the principal trees in the forest are the Dhok trees. These trees which make up the majority of the vegetation in this park, remains ostensibly dry and lifeless throughout most of the year. It bursts into life at the onset of the Monsoons and stays green for about two or three months before reverting to their dry condition again. There are also plenty of palash, some palm trees and of course the babool. The advantage of this is that animal viewing is easy, infinitely easier than in the green vegetation of the Eastern Indian forests.
You can visit the forest at two times, early morning and late afternoon, using either jeeps or canters, Canters are large vehicles. Seating up to 30 odd people, it is surprisingly maneuverable. However jeeps are much better in that they travel faster and can reach areas where the canter can’t. We went for three safaris, two in the morning and one in the afternoon. Game viewing is not the only reason I visit a forest. Forests are for enjoying the trees, the topography, the water bodies, the birds and then the animals. There is a huge thrill in seeing the tiger and other large carnivores, but it is a mistake to suborn the whole experience of entering the forest to seeing the tiger. This prevents one from enjoying many other things that are an integral part of the forest experience. For the record we saw a huge leopard, but no tiger.
But we did see a vast variety of birdlife both inside and outside the park. These included water birds and forest birds. The tree pies here are astonishingly tame and come easily to ones outstretched palm in order to pick up crumbs from them. On one occasion as many as three tree pies sat on Susmita’s palm pecking at biscuit pieces!
The Ranthambhore Fort is now a magnificent ruin, a Ganesh temple inside it is the focus of local piety every chaturthi. About 50000 people circumambulate the Fort before climbing the 250 oddd steps to the temple to pay homage. We were there during Chaturthi and I was amazed to see old men and young, flighty girls and portly maidens all walking barefoot in the forest to cover the 6 km distance around the fort. The wildlife however makes itself scarce during this time, so that is a disadvantage for the tourists.
The weather specially was so very comfortable. This is the best time to visit North India. The skies were clear and the sun reasonably tolerable even at high noon. The nights were crisp and cool and Tiger Den fed us very well, so that we were really sorry to have to return to Delhi on the way home. Till we come again, may the Dhok trees bloom every monsoon!
Tiger travel Wildlife

akdcts said…
in case anybody is interested, the above comment means ( according to google translation)
Much nonsense, I wish you liking ~ ^ ^.( whatever that might mean)
March 8, 2010 at 8:52 AM