Goopy and Bagha are gone 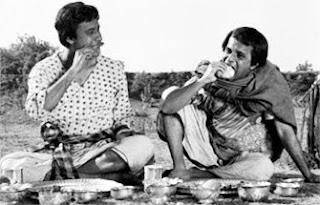 One part of our childhood to which he had clung so tenaciously finally came to an end when the surviving member of the Goopy Bagha duo, Tapan Chatterji passed away yesterday. He was a professional actor and had acted in many movies, but to our generation he was Goopy Gyne, the failed vocalist who with the help of a boon from the King of the Ghosts, became singer par excellence. Based on a short story written by Satyajit Ray’s grandfather, Upendra Kishore Roychowdhury, The Goopy Bagha series was part of our childhood, our young adult rebelliousness and our middle aged nostalgia for our lost youth.
The first film was made in 1968. We were then 10 years of age, and just the right age to suspend disbelief and breathlessly enjoy the tale of Goopy and Bagha as they rose from exiled young men with no talent to the favoured sons in law of the King of Shundi. The songs were magnificent. We realized for the first time that Satyajit Ray was a genius in composition and lyric writing as well. And who can forget Anoop Ghosal’s voice as he sang those immortal songs?
The next film was in my opinion at least Satyajit Ray’s protest against the Emergency. In Hirak Raja’r Deshe he produced a film that could be enjoyed at two levels. It was a age old story of good triumphing over evil and it was, to my mind a telling commentary on the India of that time when the emergency had just ended and India had unexpectedly been delivered from the clutches of Sanjay Gandhi.. Who can forget the political message behind the : Dori dhore debo taan, Raja hobe khan khan”?
The next movie was of course Sandip Ray’s equally wonderful creation “ Goopy Bagha Phire Elo” Goopy and Bagha had by then grown older, just as we had. They too did feel nostalgia for the youth that they had left behind as perhaps we did too. And this led them to use their magic gifts for nefarious purposes to help a magician who promised them eternal youth. Fortunately, the King of the Ghosts led them away from this path and they returned to the straight and narrow path. The story line was very adult in some ways , but the film also appealed to my daughter, who saw it a few years after it was released at the age of four.
Other than the magic of the father son duo of Satyajit and Sandeep, the films also showcased two of the most loved actors in Bengali movies: Rabi Ghosh and Tapan Chatterjee. Rabi Ghosh died of a massive heart attack more than decade ago; he was in fact stricken down in the middle of film shoot, and now with the death of Tapan our childhood finally ends, no more shall we be transported to the land of magic and song that was a part of our life for as long as we can remember. Our generation was truly lucky to have grown up with Goopy Bagha and Feluda. Our children were not so fortunate.
Bangali movies nostalgia

Indrani said…
Very well written and reminds me of my childhood.But i feel today's kids also have lots to celebrate
May 26, 2010 at 4:32 PM