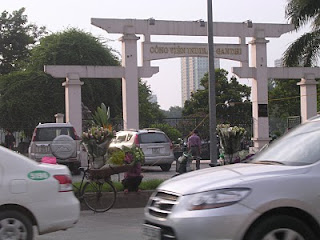 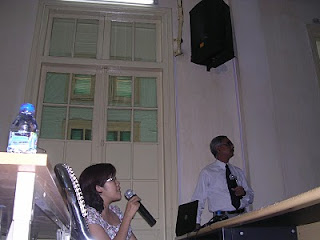 The Indira Gandhi Park In Hanoi

Right: Speaking at the Institute of Cancer, Hanoi

As the Malaysian airlines flight descended towards Hanoi, the landscape below could be that of our Bengal, paddy fields, each small patch demarcated by small raised embankments, the occasional peasant visible in short trousers and shirt, with the conical hat that became the hallmark of the Vietnamese during the Vietnam War. We cross the muddy, but wide Red River, some barges visible ferrying goods down stream and this could easily be our very own Hooghly. Only a small ring of low mountains betray the fact that I am now about to land in a Communist country, my first such visit. (Living in the realm of the Emperor of Bengal, Jyoti Basu, excepted).

The Airport is reasonably modern looking and efficient, not too crowded. Unsmiling uniformed migration personnel speak broken English and use sign language as they issue my visa and then wave me through. A car is waiting for us to ferry us to our Hotel in Hanoi. The heat is intense. Though we were told that the temperature outside was 32degrees, it feels a lot more, the humidity is killing. The car, of course is air conditioned and we soon relax. The highway, obviously brand new carries us to the city proper. Once a French colony, Vietnam drives on the right side of the road which is packed with Japanese and Korean cars. Two wheelers abound as do the occasional cyclist. Our spirits rise as we feel very much at home in this land where the traffic is chaotic and people switch lanes in gay abandon as we do in the land of freedom that is India. Only the incessant honking, which is special to our subcontinent is absent here.

We soon pass a spanking new Industrial estate. Familiar names: Yamaha, Canon are the signs that we see. No sign of Uncle Ho as yet, though we did see him later in the Government Hospitals and Universities that we visited.. As we enter the city we can see that the economy is really booming. There are any numbers of huge cranes and skyscrapers are coming up in droves. The road traffic is still more of two wheelers though. Fortuna Hotel, where we are to stay is Malaysian owned, a nice hotel, indistinguishable from many others I have stayed in many cities in many countries. The American Embassy is just opposite, its terrace protected by barbed wiring.

Hanoi is the capital of a country that has firmly repudiated communism whatever the Party may say. Though nominally still socialist, the economy has been freed to do its own thing and I am told this is even more evident in the erstwhile Saigon, Now Hoc hi Minh City, which I did not visit this time. There are many French colonial era buildings which are as beautiful as those in Singapore and Kolkata, but well maintained and still capable of eliciting a gasp of admiration. I had lunch one day at the Hotel Metropole, where the slowly moving fans, the crisp white linen table cloth, the French wineglasses .evoke the spirit of the early twentieth century when the French ruling class gathered here for a meal and gossip.

I had a speaking assignment at the Institute of Cancer. The building is very reminiscent of the School of Tropical Medicine In Kolkata. As I climbed the stairs of the main building, I had a sense of déjà vu as I recalled my first glimpse of the stairs of the MCH building. It is difficult to find any difference. The lecture hall which I used has a twenty foot ceiling, thought the furniture is modern. I can easily imagine French colonial medical officers being lectured here on the tropical diseases they would likely encounter during their postings here.

For the first time in my life, I have a translator. As I speak, a pretty young doctor, a medical oncologist looking very Western in a short frock, translates my words. I get a polite (and regimented) round of applause but very few questions, either because I am unintelligible, or because of the normal deference that Asiatics have to their lecturers!

Pierre is our host here. He is Swedish, but he first came out to Vietnam in 1979. He has been here for about 25 of the succeeding years, has married a Vietnamese lady and speaks the Vietnamese language perfectly. It is difficult language, I am told, the intonation changes the meaning of many words and it takes a lifetime to master these inflexions. Pierre takes us to a bar one night, it is one of the favourite haunts of expats, I am told. There are many hostesses, young girls all dressed in the skimpiest t shirts and shorts I have ever seen. Their brief is to encourage the guests to drink as much as possible and they do this with gusto as they keep refilling Pierre’s glass, looking at me with faint disdain as I ask for orange juice..

Pierre tells us that corruption is at its peak in Vietnam. The party officials are so corrupt that nothing happens that does not yield some profit to the apparatchik. I reflected on the situation in our good old West Bengal. The picture is the same everywhere. The healthcare is in shambles, the periphery does not have any good preventive or primary care, tertiary hospitals are coming up in big cities, but are difficult to afford. We also met a WHO official who is about to leave after four years here and he is disillusioned by the failure of his efforts to bring about some regulation in the blood banking field in Vietnam. He tells me a story that is all too familiar. Even if the Ministry of Health proposes, the local communist party can dispose of any measure that may threaten their corrupt hold on power and pelf. It is like seeing West Bengal in a mirror.

Hanoi is however a very pretty city. There are innumerable lakes and parks abound. There is one named after Indira Gandhi who is revered for her support during their dark days. However the present generation, as far as I could judge , cares nothing for that and is busy trying to wangle a visa to the US of A either to study or even better to stay on in that imperialist hell. I am reminded of our commie heroes who are careful to send their children to the West for education and used to routinely avoid the Socialist fatherland when they needed medical treatment.

However the city is much like any other South East Asian city, full of people working hard; smiles are frequent, though here language is an issue for those of us who are innocent of any Vietnamese. The impression one gets is that of a economy that is booming, of a people who are determined to get ahead, but which still has many problems to solve. A lot like Indian in other words. I hope to be back sometime to see Ho Chi Minh City, and Central Vietnam. However for those nostalgic for the days of “ Amar naam , tomar naam, Vietnam Vietnam,” please avoid Hanoi. You might be disappointed at how the revolution turned out!
Hanoi travel

english essay help said…
it's a really interesting, I'd say magic place. so glad that such wonderful places are still we have
August 29, 2011 at 12:10 PM