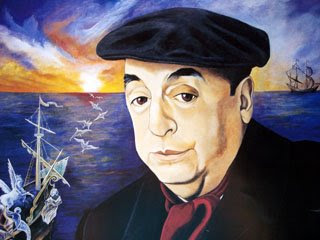 On July 12, one hundred and seven years ago, a boy was born in the small Chilean town of Parral some 350 km south of the capital, Santiago. His father was a small time railway employee and his mother, who was a teacher who died very soon after his birth. This boy, Ricardo Eliezer Neftalí Reyes Basoalto, was to become one of the twentieth century’s most famous and well loved poets, Pablo Neruda.

Neruda was lifelong communist. He became one during his stint in Spain during the Civil War and clung to his ideology despite the infamous revelations of later years. This led to many estrangements, most famously from his longtime friend, Octavio Paz, another legendary poet, who could not stomach his admiration for Stalin. While today it is easily possible to see Stalin for the monster he undoubtedly was, it was not so plain to people in the days of the Second World War when Stalin and communist Russia stood basically alone against the all conquering Germans. The British had drawn back to their island and drawn up the drawbridges and the Americans were still debating what to do until Pearl Harbor made up their minds for them.

Neruda, during his long life always spoke out against oppression and for the common man. This led to his first exile when he had to flee from his native Chile over the mountains to Argentina in a journey fraught with risk. He has described it marvelously in his Nobel Lecture, which he ended with hope “ I come from a dark region, from a land separated from all others by the steep contours of its geography. I was the most forlorn of poets and my poetry was provincial, oppressed and rainy. But always I had put my trust in man. I never lost hope. It is perhaps because of this that I have reached as far as I now have with my poetry and also with my banner.” He then quoted Rimbaud to say “In the dawn, armed with a burning patience, we shall enter the splendid Cities."

There is one marvelous story about him that I remember reading in an essay written on him by Sashi Tharoor. Once, in the sixties, he was addressing an audience in South America when he was asked to recite one of his most famous poems. Neruda started, but he faltered as he did not remember the entire poem. Suddenly one person rose up in the audience to recite the next line, and he was followed by another who recited the next, and soon the entire audience stood reciting the poem from memory, as the poet himself stood mum.

Neruda died 12 days after the coup that toppled his friend, Salvador Allende’s government. As all of our generation remembers well, it was a CIA inspired coup that “saved” Chile by crushing democracy with the full knowledge and assistance of the leaders of Freedom Inc in Washington DC. It was one of the biggest crimes that the governing class of the USA has committed; it will rank not much below their dropping of nuclear weapons in Japan. There is every reason to believe that the government of Pinochet had a hand in his death. It was rumoured that he had been poisoned, though understandably in those times, this was never proven. Pinochet, I am glad to say, had to spend much of his dotage under house arrest He unfortunately escaped the hanging which was his due.

There are many poems of his that come to mind. I will quote one poem, which brings out why so many of his generation were attracted to Communism.

“You have given me brotherhood towards the man I do not know
You have given me the added strength of all those living”
“You showed me how one person’s pain could die in victory for all
You have made me indestructible, for I no longer end in myself. “

I wonder if the idiots who call themselves communist in West Bengal have ever read these lines?

But when we talk about Neruda’s poetry, what lingers most is his love poetry, he has written some of the most sublime romantic poetry ever written.
I leave you with his incomparable Sonnet No XVIII

"I do not love you as if you were salt-rose, or topaz,
or the arrow of carnations the fire shoots off.
I love you as certain dark things are to be loved,
in secret, between the shadow and the soul.

I love you as the plant that never blooms
but carries in itself the light of hidden flowers;
thanks to your love a certain solid fragrance,
risen from the earth, lives darkly in my body.

I love you without knowing how, or when, or from where.
I love you straightforwardly, without complexities or pride;
so I love you because I know no other way

Anonymous said…
Very well written. I also love Neruda's poems. Did you read his autobiographical book "Isla Negra"? Palash Pal translated the first of this into "Jekhane bristir Janma"
January 19, 2013 at 4:03 AM