Bridge on the Untamed Teesta

August 29, 2011
This is the first guest post I am carrying in my blog. I am grateful to Mr Swapan Sen for contributing this valuable article to Reflections. I only hope that it will be only the first of many more to come.

The fateful night
On the fourth of October, 1968, at about 2-30 A.M., a lone Fire Brigade bell desperately tried to wake up the sleeping town of Jalpaiguri, located on the bank of the river Teesta in North Bengal, India. It had been raining incessantly for the last 72 hours and the rivulet Karala, which meanders across the town to meet the Teesta, had inundated most of the low-lying areas of the town, unable to discharge itself into the already overflowing Teesta. For two days and nights, the townsfolk had toiled hard hanging on to their houses, hoisting their belongings to the safety of the wooden ceilings, sleeping on makeshift beds arranged on table-tops and collecting and saving water and food. Now they were dog-tired and lost in blissful sleep. The warning toll of the Fire Brigade bell therefore, went unheeded and tragedy struck the town.

The Teesta, by then, had breached the flood protection-embankment of the town, 4 km upstream at a point, where it met the broad-gauge Railway approach-embankment of the railway-bridge No. 40 on the Teesta. It found a new course through the township destroying and carrying away anything that came in its way. By 2-25 A.M., its raging waters entered the lone powerhouse of the town cutting off the electricity and in another 10 minutes all the telephone lines too, went dead. By 5 A.M., the entire town was under 8 to 17 feet of water and about 1000 of its inhabitants were either dead or missing. Across the Teesta, on the other bank as well, the disaster was equally devastating at the hamlets, Moinaguri and Domohani. The river had breached the flood-protection embankment along the other bank too at about the same time, 700 ft upstream from the point where the railway embankment had met the flood protection-embankment.

An act of God yet an avoidable disaster
As the flood waters receded, a one-man inquiry-commission, held, apart from identifying failures in disaster management, unprecedented rainfall in the Himalayan catchments of the Teesta primarily responsible for the floods and the deluge. Technical experts of the Irrigation and Waterways Directorate of the West Bengal Government, however, arrived at somewhat different conclusions about the contributory causes of the disaster. The protection embankments of the Directorate had been breached by the river water flowing over their crests on either side immediately upstream of the railway bridge. They felt that the rise in the water level beyond the tops of embankments was due to the unusual afflux of the river water caused by restriction of the waterway at the bridge and incorrect design of the guide-bunds for the railway-bridge 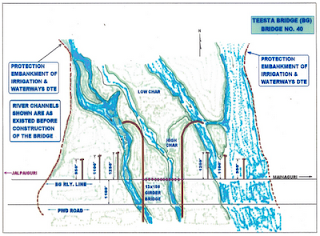 The broad gauge railway bridge across the Teesta, in 1968, had 13 spans, with clear waterway of 150 feet between the piers. Thus the waterway provided for the bridge was about 1950 feet only. The railway line was made to reach the bridge-abutments, separated by the guide-bunds deep inside the river waterway, across the Irrigation & Waterways Directorates’ protection embankments. At the bridge-site, the protection-embankments were separated by a waterway nearly 12000 feet wide, before the bridge was constructed in early sixties. About 1100 ft downstream of the Railway-bridge, was the PWD road-bridge spanning across the same guide-bunds common for both the railway and the road bridge. The river discharge was guided through the narrow waterway between these guide bunds, constructed usually by the Railways as per the age-old design of Mr. Bell. The sketch given below approximately illustrates the site conditions of the bridges.

The restricted waterway
During the rainy seasons, whenever there was heavy rainfall in the hilly catchments, the Teesta used to flow above the danger mark for the protection- embankments, upstream of the railway-bridge after its construction. This was because of the afflux of the river water caused by restriction of the waterway to about a fifth of its original width between the protection embankments. 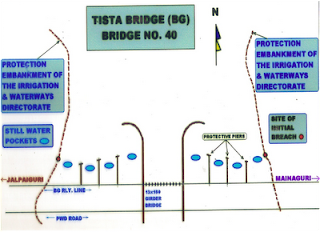 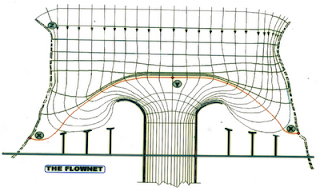 The design of the Bell-bunds was not obviously adequate to streamline the entire discharge of the river, when it was in spate, into the narrow waterway of the road and the railway bridges between the bunds, without causing abnormal afflux upstream.
The railway-approach embankment was protected with a set of spurs on either side of the bridge. These spurs, were hardly helpful to contain the afflux and only used to generate still water pockets, during the monsoons. The sketch appearing above shows the effect the combination of embankments and protection structures used.

Assuming irrotational flow, an approximate flow-net showing the streamlines and equi-potential lines at the bridge-site are shown in the following sketch.
The total head of water at points "X” near the crossing of the railway and the protection embank-ments and at ‘Y’, just upstream of the Bell-bunds, used to be the same, the points “X” and “Y” being located on the same equi-potential line (shown in red). At the point “Y”, the velocity of the river water used to be quite high (near maximum) and that at points X, where there were still water-pockets , the level of water would be much higher than that at “Y”, due to conversion of the velocity head into static head.

Upstream, the unrestricted velocity of the river discharge near the point ‘Z’, when the river was in spate in October 1968, was estimated to be about five to six feet per second. With the bridge waterway restricted to about a fifth of the full course-width of the river between embankments, the maximum velocity of the discharge between the guide-bunds of the bridge, assuming uniform depth of the river water between the embankments, could go up five times, that is, to about 25 feet per second. 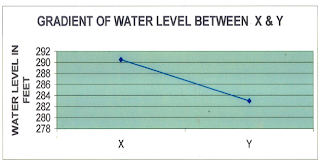 At ‘Y’, the velocity "V" could have been close to this. The equivalent static head "H", of this velocity, given by VxV/2g, even after application of energy flux correction factors, could still be close to about 9 feet. Thus the points "X” and "Y" being on the same equi-potential line, the water level at "X" would have been higher than that of "Y" by this head "H". An approximate plot of the gradient of the river water between "X" and "Y" is shown above. As a matter of fact, it is at these locations, marked by "X", the river water had spilled over the crests of the protection embankments due to the abnormal head-up of the water causing the eventual breaches.
Incidentally, the HFL, as last officially recorded, was 288.5 ft but actually this was much higher as the river water had, in fact, flowed over the crests of the protection embankments. The crest level of the embankment itself was 290.00 feet (above MSL) at the water-gauge site of the Moinaguri-Domohani protection embankment.


Need for river training at the bridge sites
The devastating flood of 1968 came up with a few lessons for the engineers to learn:

• Restriction of waterway for bridges should be done with extreme caution specially for rivers in hilly catchments where there are chances of flash-floods due to extremely heavy rainfall and blockage of waterway due to landslides. A few additional spans may cost more, yet this may be beneficial in the long run.

• There is an absolute need to control the afflux which may be caused by restriction on the waterway and avoid formation of still water pockets as had happened in the case of the Teesta bridge. 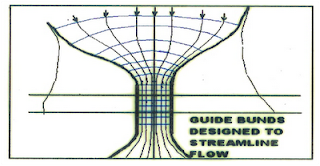 Provision of extended guide-embankments, as shown alongside, to streamline the flow of the river, instead of the traditional Bell bunds, could be a viable solution, especially where the natural waterway has to be restricted under compulsion.
Alternatively, where protection embankments exist along the banks of the river, river training spurs may be provided to cause “Siltation” in between the spurs and guide the flow into the waterway of the bridges. Laboratory-study of the river hydraulics and it's possible behavior when the bridge is constructed, may help immensely to finalize the designs of the major bridges.

Epilogue
After the 1968-flood, 7 additional spans were added to the Teesta bridges and the waterway now is about 3000 ft. One of its guide bunds has been relocated but their shape, however, has remained unaltered.

About the author
The author graduated in Civil Engineering from Bengal Engineering College, Shibpore, in 1966. Before joining the Indian Railways Stores Service, he had a two-year stint as an Assistant Engineer in the Irrigation & Waterway's Directorate, Govt. of West Bengal, India. He was posted at Jalpaiguri and is one of the few living eyewitnesses, who was present at the bridge-site in October, 1968, till the mighty Teesta spilled over the protection-embankments and breached them right before his eyes.