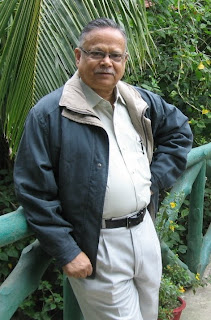 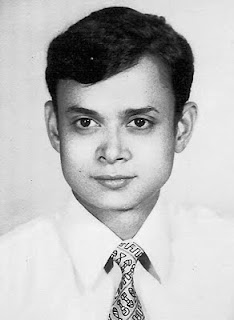 The pictures are of Mr Sen, the first one taken last year and the other in 1969, just one year after the floods.

Whatever else my blog may or may not have done, it has brought me in contact with several men and women whom I would never have met, or been in touch otherwise. Among others, it brought me in close touch with Nipon ( of Niponwave and Bong Buzz), Pranab ( Of Septicemia) , and many others .
My latest friend (if I may be so bold as to call him that) Is Swapan Sen. Mr Sen was brought up in North Bengal, passing his Higher Secondary Exams from Jenkins School In Cooch Behar. Founded in 1861, this school recently completed 150 years and is still one of the better schools in the region.. In 1961, Mr Sen went to study Civil Engineering in the Bengal Engineering College in Shibpur, today a Deemed University. After passing out, he worked for a couple of years as Assistant Engineer of the Irrigation and Waterways Directorate of the West Bengal Government and was posted in Jalpaiguri. He was transferred to Calcutta in 1969, but soon left to join the Indian Railways Stores Service where he worked until retiring in December 2005. He now stays in Dum Dum Park.
He commented on an old blog post Damming the Teesta and that is how we got in touch. He now can afford to concentrate fulltime on his passion for wildlife, the mountains and nature, which fits in neatly with my interests as well, so I am sure this is just the beginning of a fabulous friendship.
He was one of the eyewitnesses and perhaps the only living one now, of the havoc caused by the Teesta on the 2nd October 1968. Seeing the Karala River today, barely flowing through Jalpaiguri town;, it appears to be more of a drain than anything else; it is difficult to even visualize its destructive avatar that year. The Karala drains into the Teesta and with the Teesta in high spate; it flooded Jalpaiguri with disastrous effects. The hospital was one of its victims and the present hospital was built away from the Karala to prevent a recurrence.
1968 remains in the collective memory of many of us, just as 1988 does, because it was one of the years of massive flooding in West Bengal. The 1968 flood occurred mainly in North Bengal. I remember it vividly as one of my uncles was posted as a police officer in Cooch Behar at that time, if I remember correctly. I was pretty young, but I clearly recall the tension that gripped our family as there was no news from him for almost a week and horror stories began to appear in newspapers. Communications were primitive in those days and all telecommunications had been disrupted by the fury of the floods. The death toll was horrendous. As Mr Sen recalls, about 2000 people lost their lives in that fateful morning.
Mr Sen was one of the brave men who tried their best to stop the river from breaching its embankments at Domohani ( Moinaguri) , but had to flee for his life when the water started flowing over the crest of the embankment, and starting a wave of destruction that became a legend, its horrors being recounted again and again by those who lived through its devastation.
I have invited Mr Sen to share his experiences and his take on how such tragedies could be prevented and he has sent me a wonderful write up which I plan to upload very soon. He brings his experience and expertise to analyse what happened and whether it could be prevented. I hope to have it online by tomorrow. For the nonce, thank you Mr Swapan Sen!!

Swaroop Kumar Rai Charmling said…
Your friend, Mr Sen, fortunately, is not the only living eye witness to the disaster floods that submerged the whole of Teesta bazaar underwater killing thousands of the villagers. I am another living eye witness of the devastating effects of the cruel floods . Had wenot got a lift back home by the Sisters of Holy across Institute, my mother and I would have been tragic statistics. I firmly believe that a real miracle happened and that angels in disguise came to our rescue ����
October 4, 2019 at 12:03 AM

Swaroop Kumar Rai Charmling said…
Your friend, Mr Sen, fortunately, is not the only living eye witness to the disastrous floods that submerged the whole of Teesta bazaar underwater killing thousands of the villagers in October 1968! I am another living eye witness of the devastating effects of the cruel floods . Had we not got a lift back home from the Sisters of Holy across Institute, my mother and I would have been tragic statistics that fateful night. I firmly believe that a real miracle happened that day and that angels in disguise came to our rescue ����
October 4, 2019 at 12:07 AM

Sanjukta said…
Dear Sir, lovely to read your blog on Jalpaiguri Floods of 1968. I was googling on the floods, as my dad just fondly recalled the Nestle milkmaid he first tasted which came as part of relief materials after the flood. My father, 75, is one of the survivors. Our home is in Adarpara. Dad says they were confident water would not reach Adarpara but it did and devastated everything. Fortunately there was no casualties in my family. It makes me so happy and nostalgic to find someone who has blogged about Jalpaiguri, my birthplace. My dad and I now live in New Delhi. I am a freelance journalist, author, photographer and one of India's earliest bloggers. I would love to interview you sometime on your blog. You can read my blog or contact me from here: https://sanjuktabasu.in/

Would love to hear from you sometime.
My regards.

PS. Blogs are becoming things of yesteryear as Twitter Facebook has ruined it. I am so happy to see you actively blogging. Your blog is immensely valuable.
August 23, 2020 at 5:45 PM

Kanchan said…
My Grandfather Mr Arun Chandra Ganguly was the Superintendent Engineer PWD that time posted there. My mother and her elder sister are still alive and I have heard this story multiple times . The PWD quarters where they were had Gadadhar river. He was overlooking the whole the devastation being on duty for 3 days . He was left out of enquiry commission cause he had informed Kolkata HQ much early when he observed Panga Bridge was about to be washed away . This warning was ignored.
May 23, 2021 at 5:25 AM