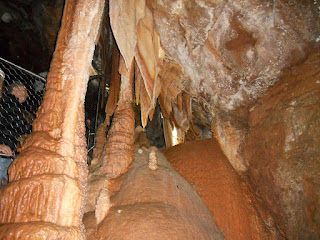 Driving out from Sydney on a bright autumn morning, we were headed for the Jenolan caves. We, meaning, Aurelia, Sovan, Susmita and myself. The traffic was heavy as we left town, but soon, we were en route to the Blue Mountains, west of Sydney, the mountains that played an important part in the colonial history of Australia and formed the first natural obstacle to the colonizers as they attempted to penetrate to the centre of the continent.
From the picture perfect town of Cootomba, the road to the Jenolan Caves branch off the main highway. The road is totally deserted this morning; we do not encounter traffic from either side. 40 kilometers on, the road winds steeply down, 8 kilometers of really steep mountain roads which lead to the magical Jenolan caves. 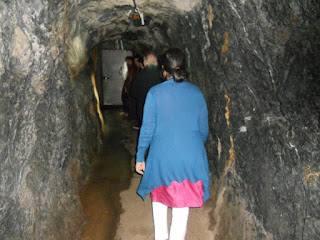 These caves were known to the local Aboriginal community for thousands of years. They treated these caves as a tribal totemic area and reportedly avoided them. However they had named them 'Binoomea' (Dark Places). The first European who entered them was probably an outlaw, James Mc Keown who allegedly hid here to avoid the forces of law and order. There is one cave, the M’c Keown’s hole which bears witness to this event. However it is more likely that the credit for the rediscovery should go to James Whalan, together with his brothers Charles and Alf who stumbled on this cave system while looking for a strayed cow from their cattle ranch in the area. This was in 1838. James and Charles explored these caves over the next decade or so and were responsible for the discovery of the Elder Cave in 1848. Subsequently other explorers discovered more caves which included the Lucas Caves which were discovered by Nicholas Irving and George Whitling in 1860. The Government of New South Wales took over the caves (then called the Fish river caves) in 1867, though the name Jenolan Caves was not bestowed on them until 1884. Jenolan, meaning High Mountain in the local aboriginal language became the final name of these set of caves from that time. 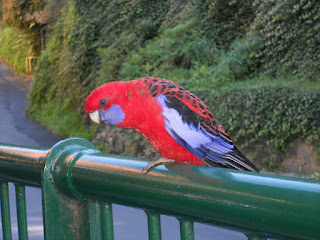 The road to Jenolan has a long and chequered history as well. Initially a bridle path was constructed which was built in 1884 and this could be negotiated by a strong walker in about 12 hours. Later, the Parliament sanctioned a carriage road which was completed in 1887 and was the so called six foot track which made it possible to visit Jenolan in 6 hours from Katoomba. Today, notwithstanding the steep road, we make good time, reaching the caves in about 3 hours out of Sydney.
The first introduction is when the road itself enters a high cave and comes out into the Jenolan. The tourist trade is well developed, plenty of cafes and hotels and a Visitor centre line the main street. However most visitors, like ourselves are day trippers, coming up from Sydney in cars and coaches. As we park we realise that there are many cars here ahead of us as well as two coaches.
There are many caves here. Variously named, the Lucas cave, River cave, Orient cave and so on. Tours are organized to each of these caves at specified times. We elect to see the Orient cave. We do not have time for any of the others, besides the tours are not cheap!
After grabbing a quick lunch, which a crimson rosella tries to share with us, we gather at the meeting point for the tour. We are joined by about 20 others and we climb a steep hillside to reach the entry point of the Orient cave. 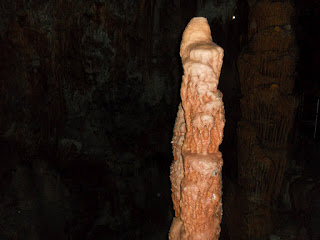 The Orient cave was originally reached only via the River cave. In 1954, a separate entrance has been created through the solid rock, the so called Binoomea Cut which enables us to reach the cave with less effort. Now the most distant part of the cave, the Bat’s End has become the closest. A superb lighting system , operated by our guide using remote control device lights up the different parts of the cave to show us some wonderful formations. 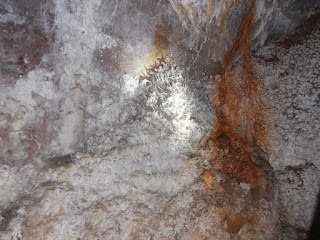 The entire caves are in the middle of a solid chunk of limestone that apparently was thrown up from the ocean in a massive volcanic explosion aeons ago. The chunk is about 1 km thick and miles in length and breadth. Once here, it was penetrated by a river which moistened the caves and drips of water led to the development of stalagmites and stalactites which are a sight to behold.
The Orient caves are so named because of the opulence of their interiors which resembled the fabled oriental courts and palaces. And indeed as we penetrate the caves we are met with more and more beautiful formations as we enter the Egyptian chamber, the Indian chamber and various others. These pictures will give some idea about their beauty.
Prosaic facts: the cave is 470 meters long and we had to negotiate 358 steps no less to navigate these depths. The LED lighting system, of which the authorities are justly proud shows off these caves in their best light (pun intended) and the glowing colours, the delicate filigree of the sheets and the minaret like stalagmites are a sight to behold.
This is a World heritage site and well it deserves to be. 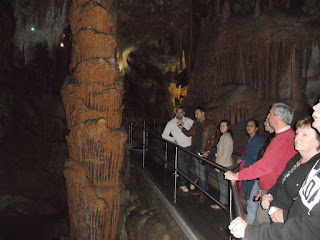 As we come out, the sun is now lower in the sky, it is growing colder and we put on our jackets as we drive to Katoomba. The excitement has not yet ended, as we have a kangaroo jump across the road in front of us and as we slow to see it disappear into the adjacent bush, another one appears to our right, waiting impatiently for us to pass so that it can cross the road.
Australian Magic , no less!

donnaj edwards said…
Congratulation for the great post. Those who come to read your Information will find lots of helpful and informative tips. Jenolan Caves