The Bombing of Guernica 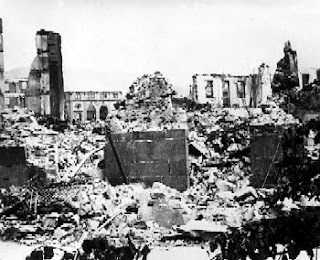 The Twentieth Century will probably go down in history as the century of Wars. There were the two world wars, the wars of liberation in Africa and China, civil wars in Nigeria and Ethiopia, but one war that lives on in the memories of men, was one that ended in defeat for the forces of Good and emphatically led to the victory of the dark forces.
I refer, of course, to the Spanish Civil war. Fought as sort of prelude to the Second World War, between 1935 and 1939, this war pitted the forces of General Franco who represented the worst face of Conservatism against the elected government of the Spanish Republic. Ranged for the Franco forces were, of course, the Catholic Church, Nazi Germany and the Italian Fascists while the British gave them tacit support. The Republicans however mobilised support from all over the world and many young men from all parts of Europe and the Americas made their cause their own. One of them was Ernest Hemingway, whose novels paint a vivid picture of the struggle.
Among the crimes committed by the Fascists, one of the best known was the bombing of Guernica. Guernica was a small Basque town, in Northern Spain. Today known as Gernika-Lumo, this town has always held an important position in the Basque national consciousness and was the site of their famous Biscayene assembly which apparently met under an oak tree in this town. The Fascist forces were approaching this area in their attempt to capture Balboa which was in Republican hands.
On April 26, 1937, a Monday, the waves of bombings started. It was a market day in Guernica and the 5000 odd population, incremented substantially by refugees fleeing from the fascists were busy with market day activities. This region had not really seen much conflict earlier, but Armageddon broke over them starting at about 4.30 in the afternoon. Wave after wave of the Fascist aircraft dropped bombs in this city. 1654 people died and very little of the town was left standing. This was the first bombing of a civilian population to cow them into surrender. Later, of course, this technique was used in Dresden and Hiroshima and Nagasaki during the Second World War.
As Steer, a British journalist , who was the person who really made this atrocity known to the outside world said: “the most ancient town of the Basques and the centre of their cultural tradition, was completely destroyed yesterday afternoon by insurgent air raiders. The bombardment of this open town far behind the lines occupied precisely three hours and a quarter, during which a powerful fleet of aeroplanes consisting of three German types, Junkers and Heinkel bombers, did not cease unloading on the town bombs weighing from 1,000 lbs. downwards and, it is calculated, more than 3,000 two-pounder aluminium incendiary projectiles. The fighters, meanwhile, plunged low from above the centre of the town to machine-gun those of the civilian population who had taken refuge in the fields.”......
In the form of its execution and the scale of the destruction it wrought, no less than in the selection of its objective, the raid on Guernica is unparalleled in military history. Guernica was not a military objective. A factory producing war material lay outside the town and was untouched. So were two barracks some distance from the town. The town lay far behind the lines. The object of the bombardment was seemingly the demoralization of the civil population and the destruction of the cradle of the Basque race."

Of all the crimes that were carried out in the 20th century, this was one of the biggest and least defensible. The raids were successful, inasmuch that the city capitulated and was taken over by the Fascists on the April 29th. The fascists, of course, immediately denied that Guernica had happened. The head of the Francoist foreign press bureau, Luis Bolín, spread the view that Guernica had been dynamited by Basque saboteurs. Bolin’s views were rapidly taken up by a number of English friends of the Francoist cause, Douglas Jerrold, Arnold Lunn, and Robert Sencourt.
However Steer, who was an eyewitness to the raids, pointed out in the Times of London: “The denial by Salamanca of all knowledge of the destruction of Gernika has created no astonishment here, since the similar but less terrible bombing of Durango was denied by them in spite of the presence of British eye-witnesses. I have spoken with hundreds of homeless and distressed people, who all give precisely the same description of the events. I have seen and measured the enormous bomb-holes at Gernika, which, since I passed through the town the day before, I can testify were not there then. Unexploded German aluminium incendiary bombs were found in Gernika marked ‘Rheindorf factory, 1936."
This incident provoked one of Picasso’s most famous paintings: Guernica. Painted in 1937, this work today hangs in the Musia Reina Sofea in Madrid, where I hope to see it someday. Guernica remains as one of the most evil deeds of the twentieth century.