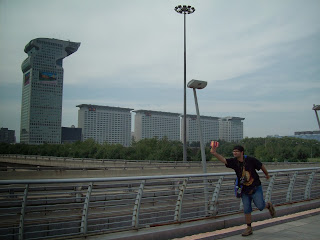 ( Continuing Dr Madhumita Sen's account of a trip to the Middle Kingdom)
It is 8pm before we feel strong enough to go out again. We explore around the hotel. Everything is well lighted, the roads are wide, there are really beautifully wide footpaths with maple trees growing in a neat row right through the middle.
Right next to the hotel, on one side, is a spa. We find a Tesco supermarket right down the road near the hotel, then a KFC. We are excited to see the bright neon signs claiming “Tesco” and “KFC” in Chinese! Then, a Pizza Hut, with the Chinese lettering made like the pizza hut logo. We take a lot of snaps.
Next to the Pizza Hut is an open – air ‘Greek’ style auditorium of sorts, where a karaoke session is going on. Huge crowds! Nice music too, Chinese of course. We watch for a while, then climb the steps to the top of the well like auditorium, to find an open air food court. There is a row of food – stalls, and nice picnic type seating areas with thatched roofing on one side. This part of the ‘mall’ is made like an Italian town and is called “The Vecchio.” However, the food is definitely street Chinese! We stroll down the row to see what’s available. Mostly snacks like fried rice, noodles, bite – sized meats and vegetables done up on sticks like kebabs, and then rows of .... kebabed scorpions, beetles, grasshoppers, silkworms and cockroaches, interspersed with prawns, crabs, and octopus! I take a lot of pictures, but my son is more adventurous, he wants to eat some scorpions. Communication is a problem, no one speaks English, but sign language works, and the people are gracious and helpful. Someone directs us to the entrance where we buy some food coupons, then one of the waiters takes the coupons and guides us back to the shop. Son points to what he wants, the lady sprinkles some spices and salt on the scorpions and roasts them and hands them piping hot to him. Okay, now the ‘testing’ bit! I tell my son to avoid the stinging tail, so he breaks the tails off and crunches 3 dangerous looking scorpions down in 3 minutes flat. “How was it?” “Like fried shrimp shells, no taste, just crunch!” Okay, a lifetime experience for him!
Then we decide, enough of local fare, let’s have a regular dinner. We first enter KFC, but it’s so crowded, we give up. Also, the food doesn’t look familiar, and everything, including the prices, is written in Chinese.
Next we walk into Pizza Hut. There is a queue, but they are seating people once a table is available (staying in Malaysia, one forgets what queues and crowds can be like!). We wait in a pleasant waiting area for only 10 minutes, then are seated in the restaurant. It is a Monday night, but every table is occupied. I had read that an average Chinese person earns about 1000 to 1500 Yuan a month (500 – 750 RM), and the cost of a pizza is about 70 Yuan, so there must be a lot of rich people in
Beijing! Anyway, at least we can read the menu card and order ordinary pizza and some green tea. And, they give knives and forks with the pizza! Whew! We have a great meal, and walk back slowly to the hotel, taking in the still on-going karaoke singing at the corner. We bathe and go to bed by 11pm since tomorrow we have to start early.

DAY 2: Our son wakes up at 5am! He hogs the loo as usual, while hubby and I have our morning coffee. We go for breakfast at 7am. Breakfast is more or less the same as yesterday, and hubby struggles through with soup-spoons. (This is a 4 star hotel in one of the more posh areas of town, with many westerners staying as well, but no spoons, knives or forks. Toast and jam, but no spoons/knives? Everyone seems to cope with chopsticks!).
We are ready and downstairs at 8.45am, and Joe is there with the van. Alice rushes up at 9, and we are off to the Great Wall.
Beijing is a spanking, brand new city, at least wherever we go seems to be that way. The roads are wide, even in the most crowded areas of the city, with 4 to 6 lanes (yes!). The pavements and road dividers are beautifully maintained with plants, mostly roses (lovely!), lilies and other flowering plants, and the sides have Maples, Silver oaks, birches, maidenhair and other trees I don’t recognise. Alice tells me that 16 years ago, when she first moved to Beijing, it was quite barren, and dust storms used to blow through the city, most buildings were only 2 or 3 storied, and the traffic was mainly bicycles. Over the past 15 years, thousands of trees have been planted, and the air has improved a lot. All the old buildings have been razed to the ground and the place now looks like Singapore multiplied by 100! Alice is all praises for the new Metro system, and Beijing has a good bus system as well, for the common man, but she is less enthusiastic about the government. She candidly lets us know that having a single party rule is a bad idea, and freedom of speech is definitely greatly curtailed. She is a great advocate of democracy, and when we tell her that multiple parties can create chaos, she says – at least there’s a choice. Okay, she posits, there should be two parties, at least! There is a lot of unemployment, especially among the educated youth. She smilingly points out that we seem to have followed the Chinese one-child policy! Having children in China is still mandated by the government, and only farmers and the very rich are allowed to have two children. (While we were there, we did see some families with 2 children, but in all of them, the older child was a girl).