The Last of the Mohicans: Manna Dey 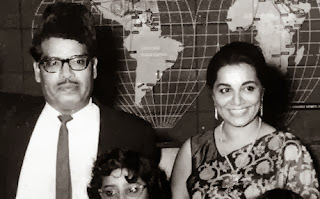 Manna Dey and his wife,Sulochona

The last of the Mohicans has departed. Manna Dey, the only surviving member of the incomparable male quartet of Mukesh, Rafi , Kishore and Manna died last week at Bangalore. We were fortunate that we grew up in an era when these stalwarts were competing to sing better and better songs. Accompanied by the legendary music directors of those days, S D Burman, his son RD, Shankar and Jaikishen, Laxmikant Pyarelal and so many others, the sixties and the seventies seemed to be a golden time when superb compositions and songs poured out in an seemingly never ending stream.
Of the four singers mentioned, Manna Dey was perhaps the least flamboyant. He was known for his correct classical background, and had honed his skills while training under his legendary uncle K C Dey, the famous blind singer known by the now politically incorrect name of Kana Kesto. He started his career in the forties and sang with the same superb skill right up to the nineties. He has probably has the record of singing in most of the Indian languages with equal skill, but to me obviously his Hindi and Bengali songs resonate the most. 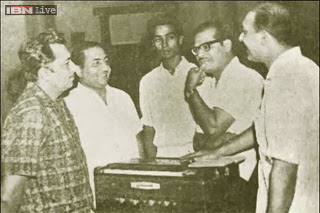 Some of the Immortals
I do not want to write a potted history of the man, we have had it ad nauseum over the et. her and the airwaves over the past two days. I will only recall a couple of his songs which, for us embody what Manna Dey was all about.
These are the Bengali song Coffee house er adda ta aaj ar nei ( hear it here) There are few Bengalis, particularly those who live in exile, who don’t turn a trifle bleary eyed as this song is played. The second is of course the incomparable song from Anand “Zindagi kaise he paheli”
It is difficult today to conceive the type of dedication and hard work that went into the development of such skills. Let us thank our stars that we lived when Manna Dey sang: it has enriched our lives so much.