Kutna Hora: the Heart of Bohemia 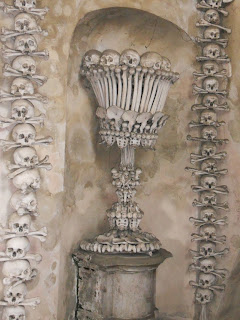 When we visited Eastern Europe this year, we had a three day stay at Prague. There is little to write about Prague that has not been written a thousand times already, so I shall not waste my time. Suffice it to say that it is without doubt one of the most beautiful cities in the world. I loved it.
This area in which the capital of the Czech Republic is situated is of course Bohemia, the legendary place for musicians, artists and writers whose alleged lifestyle has gifted the word bohemian to the English language. Originally a kingdom in the heart of Europe, these lands have seen many vicissitudes over the centuries, being ruled over by the adjacent German states, the Hapsburgs, and most recently splitting from the Slovak republic to become a member of the European union, albeit with its own currency still intact.
About 60 kilometres from Prague is the town of Kutna Hora. Now it is a sleepy town, mainly dependent on tourists, but in the 14th and 15th centuries, it was a royal town and overshadowed Prague. This was because of the the silver mines in the valleys around it which made it one of the richest towns in Europe during its heyday. Unfortunately, when the silver ran out, so did its fortunes and it dwindled to a small town which it is till the present day. However what remained were some exquisite buildings which were built in the glory days and which are still a huge tourist attraction.
I however had never heard of the place till I got to Prague, or was it when I was researching Prague before the journey. What attracted my attention was, however, not the city itself, but a macabre monument which is its chief attraction today.
It appears that plague, which used to regularly massacre the populations of Europe during the Middle ages, paid a visit to Kutna Hora in the 14th century. This led to about 40,000 deaths and the victims were buried in the then Roman Catholic cemetery. This burial ground was even more in demand because during its foundation, earth from Golgotha was allegedly sprinkled here. However, when the cemetery became filled with the victims of the plague, it became a custom to exhume the bones and store them in the Chapel of All Saints that was built there. It is said that blind monks who were in charge of the place first began to lay out the bones in geometric shapes. However in the 1870s, a woodcarver named František Rint was commissioned by the local feudal lords to decorate the chapel with these bones and he did this with great effect. It is today part of the world heritage site of Kutna Hora. 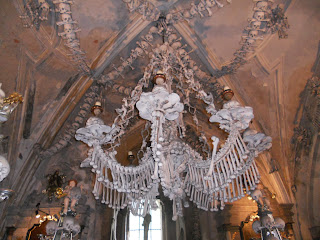 We took a day trip to Kutna Hora from Prague. There are any numbers of trips departing daily from and near the Wenceslas square to Kutna Hora. Our trip was in a minbus with about 10 other companions, two of them Indians from our own hotel.
The drive is enjoyable; as we left Prague and entered the Bohemian countryside. The land is undulating, once rising high over the neighboring cultivated fields and then dipping into a trough. In about 90 minutes we were at Ossuary as the Chapel is called.
You have to go down some steps into the vault of the church itself and are immediately confronted with the bones. At first sight one does not realize what material the chandeliers, geometric shapes, human figures and other decorations are made of. It is only at a second glance that you realize with a faint sense of shock that these are all made of bones: mainly long bones, lots of ribs and a scattering of skulls. It is also disturbing for us not familiar with burials to accept this casual use of human remains.
The lighting is probably purposely subdued to add to the gruesome effect. We did not spend much time inside. Outside the chapel are old graves are lying in the midst of spring flowers which have bloomed in plenty. It is soothing here: one can relate with the dead. In the Ossuray, it is more like a decorated osteology class!
The road outside is packed with souvenir shops; selling all manner of gimcracks.
After about an hour here, we are driven to the City centre.

This is where the city really comes to its own. It is an exquisite gem of a place, easily traversed on foot and full of the most marvelous buildings.
First on the traveler’s itinerary and on ours was, of course, the St Barbara’s church. Built in the 13th century, this church, while not as grand as the St Vitus’s Church in Prague, both within and outside, its proportions, the paintings, carvings and woodwork all evoke a sense of wonder. I must add, of course that while the building of the church was started in 1388 in the heydays of the mining industry, the closure of the mines impacted the work and it was finally completed only early in the twentieth century. This was common for many cathedrals in Europe in Medieval times, when constructions work went on for centuries, depending on the rise and fall of the fortunes of the group building it. As far as I can remember, the Munich cathedral also has a similar history.
The Jesuits were an important force here in the 1600s and next to the walkway that leads to the cathedral is the Jesuit College. Today it is being remodeled as a museum and in front of it is the walkway that overlooks the valley of silver, the Vrchlice valley. This path leads to the centre of town which has an open square lined with cafes and restaurants. Walking down the streets is delight as small alleys lead to well preserved medieval buildings. It is easy to leave the twenty first century far behind as one enters the fourteenth in these cobbled streets and well preserved buildings. We spend several hours wandering at will, entering the Town Hall, also a medieval structure ) , the church of Madonna and some others. Lunch is at a marvelous restaurant on the square sitting at a sun dappled table at the square. Soon it is time to return to Prague. This evening we have planned a trip to the opera. 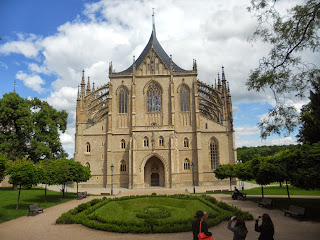