By the banks of the Mekong Part 1 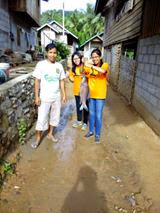 My daughter recently visited Laos as a member of a Nanyang Technological University student outreach team. This is her account of the trip.

By the Banks of the Mekong By Shreya Dutta

Laos People’s Democratic Republic or ‘Lao’ as the French call it is a South-East Asian country and ASEAN member. I start this write-up with this basic information as many, or let me reframe, most people I know didn’t know what or where Laos is until I explained that it’s a country of its own. A friend got it confused with Lagos in Nigeria and congratulated me for having the opportunity to travel to Africa. Some were in the belief that it’s just a part of Myanmar, Indonesia, Thailand or Vietnam. Some knew and one fellow pleasantly surprised me by saying, “Oh you’re going to Laos! Its capital is Vientiane, right?” Laos is one of the most underdeveloped countries in the world with about a third of the people being below the poverty line and it being the 25th most hungry nation. It is also the world’s most heavily bombed nation per capita due to the bombings by the U.S. in mid-90s as a part of the Secret War in Laos. Till date, many bombs which failed to burst are buried in the nation’s land, leaving it contaminated, and killing people from time to time till date.
Now, as an initiative by the environmental club from Nanyang Technological University (NTU), called Earthlink@NTU and a grant scheme called the Youth Expedition Project (YEP) by the National Youth Council, Singapore, a group of NTU students embarked on a service learning trip called EcoveNTUre 2014 to Laos PDR for creating environmental awareness and rural development in two villages in the northern part of the country.
Our project started with a lot of bonding sessions, pre-camp activities and fund-raising events. The first fundraising event was held in March during NTU Open House 2014 when Earthlink set up a booth for selling plants, goodies and postcards to the general public. The second one was during NTU Greenfest 2014 again in March and this time EcoveNTUre had its own booth, selling handmade goodies, T-shirts and postcards. Both events contributed to quite a collection. This was followed by the pre-trip bonding session to Pulau Ubin, a small island in North-east Singapore where we connected with our team members over sea kayaking, fish spa and interactive games. This was followed by another fund-raising event where we sold old clothes and toys in a flea market. We even had a coastal cleanup in Tanah Merah, Singapore where 96 kg of trash was cleared off the coast and served as a pre-trip activity. Finally we wrapped up the pre-trip activities by dedicating few weekends for preparation of materials for teaching the school children in the villages, packing logistic items, division of responsibilities and preparing for the cultural performance we were supposed to present before the village folks of the two villages.
Now, before I begin describing the trip, how did each one of us land up in the project? Some of us got emails, some registered at the booth set up for EcoveNTUre at an event. We were all called in for interviews which was taken by our leaders (who were EcoveNTUre members from previous years as well) and selected. Some backed out and some joined in after much contemplation and finally a group of 20 students were formed. The main leader was Wong Wei Sum, a Physics student in her final year in university while Yong Zen (deputy-leader), Ryan Jin (secretary of Earthlink@NTU and EcoveNTUre leader) and Jia Wen were the other team leaders. It was easy for other team members to follow them but the leaders, especially Wei Sum, had to sacrifice many a night’s sleep to come up with the proposal, apply for sponsorship, arrange for fund-raising events, collaborate with various companies and delegate work to each one of us, among other responsibilities. Even Toh Gui Qin or Grace as we call her (team member, current and past EcoveNTUre trips) worked extremely hard in coming up with the two EcoveNTUre t-shirts and banner design and coaching us patiently for the cultural performance.

Gui qin said…
Sorry to embarrass you but Ryan is a team member in Ecoventure as well as the President of the 21st Earthlink Committee.

And thank you for mentioning my name and I am glad to have Shreya in my team too! :)