The First Ever Blood Transfusions.

The field of blood transfusion can rightly be said to have started in the 1660s.On the 17th December 1666, Richard Lower an Oxford   physician published a   paper in the Philosophical Transactions which described an experiment in where the procedure was carried out among dogs. The paper can be accessed from JSTOR. To be more precise, he informed the famous Robert Boyle about his work and he communicated this to the journal.  Incidentally, the Philosophical Transactions is the oldest continually published scientific journal in the world.   Incidentally, Aurangzeb still ruled India and the Jantar Mantar was not to be built until more than 50 years later.
The description of the experiment would have all the animal activists in the world up in arms. The carotid artery of the first dog was exposed and tied off distally and the proximal part tied with a ligature that could be loosened at will. A (goose?) quill was placed in this and this dog acted as the donor. The recipient dog had his jugular vein exposed and two quills were placed, one nearer the heart to receive the blood form the donor and a second one to drain blood away from the  dog. The bleeding continued until the first dog  began “ to cry, and faint, and fall into Convulsions,and at last dye by his side”.
The recipient was, however made of sterner stuff. This dog , if you  “sow up the skin and dismiss him and the Dog will leap from the Table and shaken himself and run away as if nothing ailed him “  Dr Lower planned to repeat this experiment, not on one dog, but  by bleeding several dogs into one and even several creatures into one . However the results of these experiments, if they were carried out are not known to us.
Boyle, in another paper published a few months later asked some pertinent theoretical questions about the experiments. The particular date of the issue in which he published his article  is perhaps wrongly printed  as February 11, 1666. Possibly it should be 1667.
Anyway, Boyle asked some important questions , 16 in number . I think it would be nice to see the actual facsimile  of the questions he asked  extracted from the Philosophical Transactions. 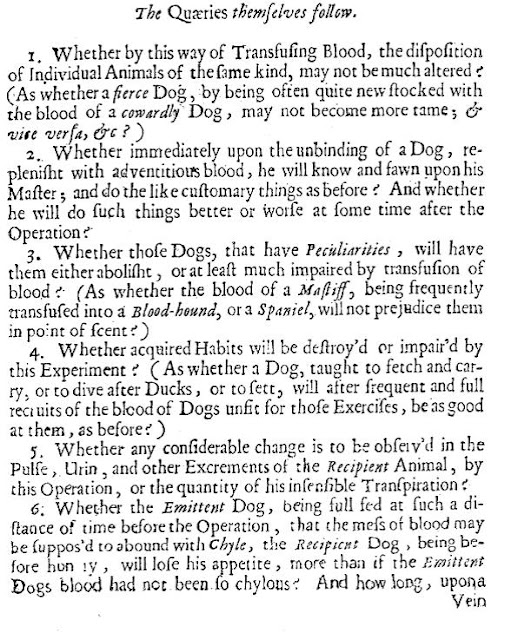 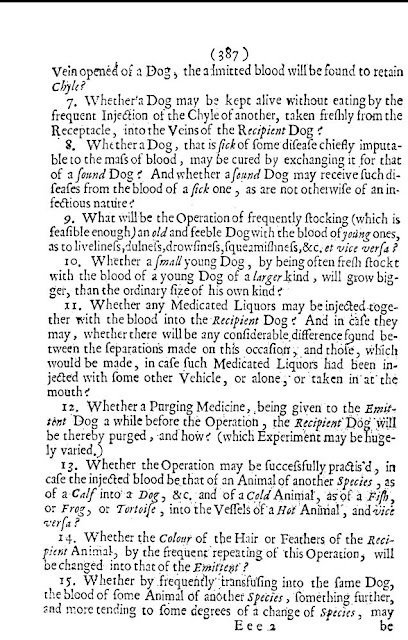 Very nice post here thanks for it .I always like and such a super contents of these post.Excellent and very cool idea and great content of different kinds of the valuable information's.