The Erich Kastner School and Emil and the Detectives 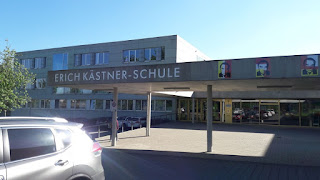 During my stay in Bochum, I used to walk the couple of kilometres from my apartment at the House of Nations near the Ruhr University. This walk was pleasant, it took me through a small wood and then under a railway culvert and past a school and finally to the Tower where the Department to which I was assigned was housed.  I noticed that the school was named after Erich Kastner. I was wondering why the name sounded slightly familiar. About a week later I realized: Erich Kastner was none other than the author who wrote Emil and the Detectives.
For most of us English speaking types (anti-national Pakis every one of us, I am now told), Enid Blyton was the prototype of the childhood detective story. Whatever else we read, it was of British origin. We who spoke Bengali had, of course, our vast literature of children’s’ literature at our disposal. I am sure our Hindi and Tamil speaking friends also read some children’s’ books in their language. It is unfortunate that I did not then and I am sure none of our children and grandchildren even now get to read many books written in an Indian language other than their own. Anyway, that is not the story, What I want to emphasize is that even the European books that we read were almost exclusively British. Of course, there was the Swiss Family Robinson, Victor Hugo’s novels, ( much later), and some more, but all our reading was from British and the occasional American writer. The Tower, a heritage building which housed the Department of Ethics.

Fortunately for me, I had an uncle (my Bedouinmama) who was an intellectual in the best sense of the term. He was a lifelong communist, a thinker and one of those polymaths who could read and write equally well in Bengali and English. His smallish apartment In North Calcutta was full of books, in all shapes, sizes, languages and genres. Incidentally, he was called Bedouin after the Arab nomads and it was no wonder that he named his twin daughters Arbi( from the Arab land) and Farsi ( from Iran). Be that as it may, the point is that he introduced me to many authors who I would never have met in the normal course of reading. And one of the books that he presented to me was Emil and the Detectives.
This was a simple story of Emil, a country boy from a small village where he is bought up by a single mother. Emil is making his first journey alone to Berlin where his grandmother lives. He is carrying a (for him) substantial amount of money and when he falls asleep on the train, the money is stolen by a co-passenger. Emil realizes who the culprit is and leaves the train before his stop to follow the culprit. In Berlin, he falls in with a group of young lads who join him in his quest to unmask the thief and the story shows how they manage to do so.
The story is thrilling, of course, but what is even more important is that the story is a moving lesson of hope, about how there are always people who help you, and how, in a group, you can achieve the impossible. It is a very popular book for children in Germany and when I mentioned it to my friends here they were all unanimous that Emil had been part of their childhood too and it still ranks as one of the favourites among children even in these days.
Erich Kastner was born in Dresden in 1899 and initially trained to be a teacher. He dropped out and was drafted into the German Army in the First World War. His experience left him a strong antimilitarist and this was reflected in all his writings. After the War he lived for a period in Leipzig where he obtained a doctorate and became a journalist and a critic. He later moved to Berlin during the Weimer republic years and it was at this time that a stream of poems, plays, novels and newspaper articles poured from his pen. He wrote Emil and the Detectives in 1928 and this book sold over a million copies and Wikipedia informs me that it has been translated into  59 languages ( why is Bengali not one of them, or is it?). There was also a sequel, Emil and the Three Twins, which alas I never read. 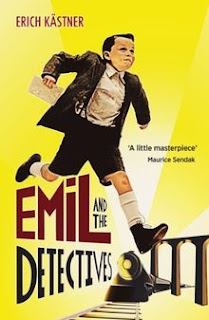 He was in the bad books of the Nazis and his books were burnt during the Third Reich. However, he survived the war and lived to see the destruction of his beloved Dresden. After the War, he lived in Munich but over the years, disillusioned by Germany’s decision to join the NATO he wrote less and less and suffered an alcohol problem in his later years. He died in Munich in 1974.
If you have not read the book, please do, I reread it with much pleasure last month. At least buy a copy to give to some youngster who will bless you 50 years later as I remember with gratitude my BedouinMama, for this and so many other things.
As for the Erich Kastner Scule in Bochum, my very best wishes!