John Venn and the Venn diagrams


Recently, the British Prime Minister, referred memorably by Hugh Grant as the “over-promoted rubber bath toy”, allegedly used a Venn diagram in order to pick his ministers. Apparently, he tried to find the set of Tory MPs who were pro Brexit and also had some measure of competence. Rumour has it that he wound up with a null result. Anyway, this reminded me that we had been first introduced to Venn diagrams by Mr Pathrose, our mathematics teacher at Don Bosco School. Ancient civilisations which used mathematics out of intellectual curiosity or to solve practical problems invented the use of diagrams in mathematics. Hindus, Greeks, Chinese, Egyptians all used diagrams in mathematics, Leonardo da Vinci is often considered the person who really made them an art form in the fifteenth century. The use of numbers and categories gave rise to a necessity to categorise them and to represent their relationships. This was made possible by the Venn Diagram
At that time I do not remember hearing anything about the Venn who created the diagrams, but now I felt some curiosity about the man who invented them. It turns out that he was an interesting person of many parts.


John Archibald Venn FRS was born on the 4 August 1834 to Rev Henry Venn and Martha Sykes In Hull, England. At the time of his birth, his father was the rector of the parish of Drypool, near Hull. He came from a long line of distinguished churchmen; both his father and grandfather were prominent members of the evangelical Christian movement. John’s mother died in his early childhood and he moved to London, or to Highgate to be more specific and John was educated in London, first at Sir Roger Chlomley’s School and then at the private Islington Preparatory School. In October 1953 he entered Gonville & Caius College at Cambridge University and was fully expected to follow his family tradition of entering the Church. He proved himself to be brilliant in mathematics, graduating as the sixth wrangler in the Mathematical Tripos in 1857. As expected, he was ordained a priest in 1859. He had, in the meanwhile already been ordained a deacon at Ely the previous year. After his ordination, he served as a curate, first at Cheshunt, Hertfordshire and then at Mortlake, Surrey.
In 1866, Venn published The Logic of Chance,  a groundbreaking book that investigated the frequency theory of probability, suggesting that probability should be determined by how often something is forecast to occur as opposed to “educated” assumptions. Venn then further developed mathematician George Boole's theories in the 1881 work Symbolic Logic, in which he highlighted what would become known as Venn diagrams.
His work in probability theory is not our subject today, But his paper in Philosophical Magazine“On the Diagrammatic and Mechanical Representation of Propositions and Reasonings” was where he first introduced the Venn diagrams. What exactly are they? 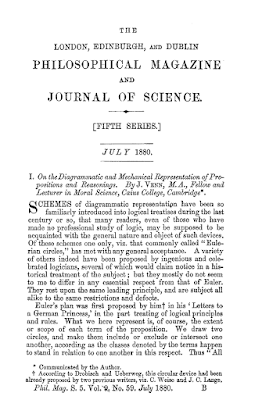 Very simply put, we can have sets of things, for instance, we can have a set of friends who play football. We can also have a set of friends who play tennis. If we want to find out who among our friends play football and tennis we simply use the Venn diagram which tells us in a jiffy who these friends are.This site explains it much better than I would be able to. While this seems very simplistic and not really an earthshaking advance, these diagrams have immense importance in advanced mathematical concepts.
In 1883 Venn was elected to the Royal Society as a fellow and later in life, he collaborated with his son to compile a history of Cambridge University the  Alumni Cantabrigienses. The first volume, published in 1922, contained 76,000 names and covered the period up to 1751. It was "nothing less than a ‘biographical list of all known students, graduates, and holders of office at the University of Cambridge from the earliest times to 1900’. At the time of Venn's death the second part, covering the period from 1751 to 1900, existed in manuscript and contained a further 60,000 names.
Venn is of interest to historians of sport as well. He invented a bowling machine which he demonstrated to Victor Trumper’s Australian team which visited England in 1909. the machine was so accurate that it actually bowled out the top-ranked player of the team four times consecutively. There was apparently a jointed arm which delivered the ball from a height of seven and half feet and the machine could be adjusted to bowl a full length or short pitched ball as well, A  report in the Cambridge Independent Press says it all. 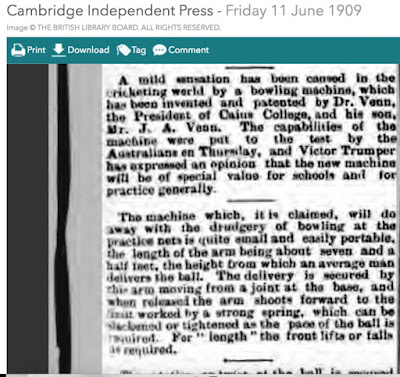 He also had many other interests, including garden flowers and antiquarianism. He died in 1923.

Creately has created Venn diagram templates fit your requirement and then download them as a PDF. For example, if you’re a teacher, then you can modify the template online and add name and class as the fields and then download it. You can even add names to the circles, fill some of the circles etc. You’re only bound by your creativity.
September 23, 2021 at 5:49 PM