September 02, 2021
In today’s peripatetic existence, most people will be hard put to pin down what they consider their home. Take me, for instance. We were brought up in the residential quarters provided by my father’s employers, the Calcutta Port Commissioners, today the Kolkata Port Trust, or maybe the Shyamaprasad Mukherjee Port Trust or whatever. My father’s parental home was scattered to the winds by the time I became aware of such matters and while we loved going to my maternal grandparents in a village near Krishnanagar, it was not “Home”. For us, home was B/6 Nimak Mahal Road and then 12 Portland Park and finally my parent’s apartment in Parnasree. Some of my friends who lived in Nimal Mahal with us used to depart every winter to their “homes” in Lucknow and Delhi and elsewhere, but for us, our parents’ residence was our home. Later when I got married I have lived in a succession of places: Budge Budge, Baishnabnagar in Malda, The Lake Gardens’ Government Quarters and then successively in Pokhara, Gangtok, Siliguri and Kuala Lumpur. There have been varied experiences in all these places, most of which we enjoyed, and sometimes we have bad memories of particular incidents. But did I consider any of these home? How does one decide? I have given this matter much thought. I think the key is what you felt when you returned to the city after an absence. Did you feel a gladness, a feeling that soon we will be in a safe place and all will be well? Where did I have these feelings? The first, of course was in Nimak Mahal Road, where my first memories are located, where I had my first friends, many of whom are still friends, where I learnt to climb trees, search for snails and toads, and had my first crush. There are many memories good and bad but the abiding memory is of us driving up the approach to Block B after we returned from our holidays. Those were the days of driving holidays, when the roads were narrower, but far less crowded and it was possible to stay in PWD bungalows and rest houses all over what is now Jharkhand, but what was then the undivided state of Bihar. The Oil Shock of 1973 put paid to most driving holidays in those days, but by then I was entering college and was not travelling so much with my parents anyway. 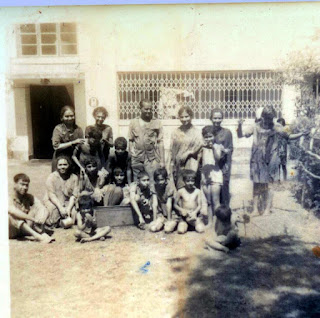 Celebrating Holi: Nimak Mahal in the sixties
As we came up the drive to Block B where we lived, the feeling was always of entering a known place, a place where I knew every tree, every bush, every person and every brick. The sense of familiarity was overwhelming and I always felt a sense of safeness, a sense of a place where everybody knew me and I had no secrets, I have never lived in a joint family, but Nimak Mahal was in a sense, a joint family. Everybody knew everything about everybody. If there was a minor triumph at school you could count on everybody congratulating you; if you did something bad, no other parent would hesitate to take it up with you and give you the scolding that you deserved. We could pretty much eat in each other’s houses whenever we wanted and our parents also found their neighbours a very safe support system. That is not to say that it was all songs and roses, but the general sentiment was of a togetherness, which has lasted over the years. Even today, I would feel little compunction is asking for favours from one of my then neighbours and I hope that they would also feel the same way. So even today when Nimak Mahal Quarters seems to have been abandoned by the Port Trust, we cannot pass that way without feeling an overwhelming feeling of having come home. 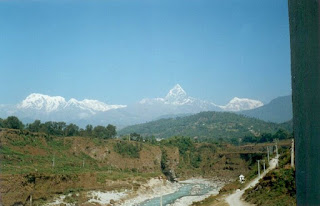 The enchanted valley of Pokhara
The next place that evoked such feelings in me was the city of Pokhara. I am generally anti imperialist, but if I have ever coveted another country’s land, I have coveted the valley of Pokhara. It would be all right with me if India did some underhand machination to annex the land of the Macchepuchare. But jokes apart, Pokhara was one place that I really felt was home, We lived there for barely four years, but every day was like living in a paradise. We used to return to Pokhara from Kolkata by air to Kathmandu and then we often used to hire a car to take us to Pokhara. There was a spot on the road as we approached Pokhara when we could catch the first glimpse of the Kaundada hill. This Hill was just behind the Manipal Teaching Hospital where we worked and lived, In fact the hospital, the students’ hostels and the faculty housing were all built on terraces in the lower reaches of this mountain. This was the mountain we climbed for our bird watching expeditions and to get the best views of the Lali Guras in the spring. Be that as it may, just glimpsing the mountain made us feel that we were now back to our home where all was good, we would be safe and life was wonderful. As we drew closer, the mountain became more and more visible and the feeling that we were now returning home more and more palpable. Why was Pokhara so much like a hometown for us? First, it was the most beautiful place in the world that I had ever lived in. I had trekked all over the Indian and Nepal Himalayas over the last 15 odd years before I came to live in Pokhara, but my visits to the mountains had always been confined to the summer(premonsoon) and autumn( post monsoon seasons). My friends and I were always impecunious, so we had to rush through to the starting pint of the trek, and the intermediary stations barely registered in our consciousness. But now, I lived in the mountains all year long. The beauty of the monsoons in the hills has to be seen to be believed, but previously I had always avoided the hills at that time. Most people know about the conventional beauty of Pokhara, many have visited the Phewa Lake and some lucky ones have seen the entire Annapurna Range as well as the Macchepuchare in all its glory. But when we lived there we could explore the smaller valleys which were accessible only by walking. We met the people who lived there who offered us apples and oranges form their orchards, who told us of short cuts and always had a pleasant word for my daughter. There were the students who lived with us at the same campus, visited us often, and went for picnics and treks with us. The first thing in the morning, we looked out of our bedroom window and checked whether the mountains were out: if they were somehow we were sure it would be a great day. The Seti River flowed just below us, we slept with its thunder in our ears and it was the first thing we heard when we woke up in the morning. Do not get me wrong, it was not all fun. The Maoist insurgency was gathering force during the time we were there and curfews and bandhs became the order of the day. But somehow, we always felt that in the Vale of Pokhara, with the Macchepuchare smiling down on us, we were safe in our home.
Now Siliguri is home. As soon as the plane descends to make its landfall at the Bagdogra airport, we crane our necks to follow the rivers and the forests and the gardens and on lucky days the Kanchenjunga from the windows of our aircraft. As we are driven out of the Bagdogra airport, we can see the immaculately ordered tea gardens and then the hills. This feels like we are at a place where we belong, a home and after a long time since we lost our home in Pokhara, we can feel that yes, here we are, in a place where we have everything we need; rivers, mountains, forests and wildlife. I hope to end my days here.
Home Pokhara siliguri