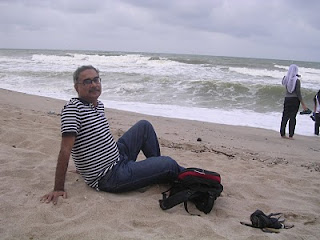 It was already dark as the plane took off from Kuala Lumpur on the way to Kuala Terengannu. KT is on the East coast of Malaysia, lying abreast the South China Sea. The name carries many romantic connotations. To me it conjures up an image of Chinese junks carrying the produce of the Middle Kingdom traversing the South China Sea to the Spice Islands in the South for thousands of years and acting as the highway from China to their trysts with Indian merchants travelling across the Bay of Bengal to meet them in the Indonesian Archipelago or the Malaysian peninsula..
Kuala Terengganu is the capital of a small state of Terengganu. It was founded by Chinese merchants coming to the Malay Peninsula to trade. Originally a Hindu state, it was the first area in the peninsula to accept Islam. The Malacca empire was its overlord in medieval times, but in the eighteenth century Terengganu became a separate Sultanate. This Sultanate was ruled by Siam for some time before the British made it part of the Unfederated Malay States. After a brief time under the Japanese in World War II, it was again under British rule till Merdeka ( independence) in 1957. .
The flight was short, reaching KT in about 40 minutes. The airport was small, apparently there are only about 4-5 pairs of flights every day. However like all airports in this part of the world, it was shining and reasonably efficient. Hiring a cab took just minutes and I was on the way to my hotel. I was staying at the Primula Beach Hotel where a Good Clinical Practice Workshop was being held. The hotel was nice, just off the beach and I could see the breakers ending up on the sands from the balcony of my room. This was a welcome change from the apology of a sea that you see on the West coast where the Sumatra island protects the Malaysian coast from many dangers but leaves the sea looking like a millpond. Malacca, Penang or Langkawi , nowhere does the sea look like what I am used to. KT, however has restored my faith in the Malaysian seaside !.
The entire day was spent in the workshop: lots of talking, some group exercises and food every two hours. I enjoyed all that food (not cooked by me) for the first day, but then too much food palled, I am really getting old! The evenings were free, not totally though as I was expected to read through the material that we were presented. However it was lovely to walk through a beach watching the incoming tide after many many years. I was in Chennai only last month, but I never went to the beach. There were families sitting on the beach, many picnicking. There were stalls selling corn on the cob and other snacks, Kites were available for sale and the whole atmosphere was that of good fun and games. Some young men were trying to surf, however they appeared inexpert and I don’t suppose everybody does surf like the Old spice ad in any case. The beach is apparently not suitable for swimming as the sea is rough and the sand slopes down precipitously. Nobody seemed to venture into the water, except the surfers. A vigorous game of beach football was on in one stretch of beach as children played on another part.
The monsoon is still active. You can see the pregnant monsoon clouds crossing over landwards every evening and then it starts to rain. The rain is sometimes heavy, but mostly it is a light drizzle which does not seem to disturb most activities. Everybody is used to it and enjoys the cool drenching. The entire beach front seemed to be full of restaurants. There was of course a surfeit of sea food, so that I gorged there for dinner every evening. The prawns were specially wonderful, the red and spicy curry is particularly tempting, reminding one of chingri macher jhol from back home.
It was not all fun and games: we had to appear for a test at the end of the workshop, MCQ s no less: pass marks 80%! However I am informed that I have passed, I got teh email yesterday, I heaved a sigh of relief; failing a test at this ripe old age would be humiliating to say the least and I can well imagine the glee that would ensue among many of my students if they came to know.
But all good things come to an end and so did this trip. I am now back in Kula Lumpur, back to the office and the world of protocols and cultures and publications. Next stop: Delhi and Jaipur, next weekend!
Kuala Terenggannu travel

It seems you are living in the fast lane. It's good for us as we get to read your travelogues. Keep them coming Sir!
February 7, 2010 at 2:29 AM

akdcts said…
"People should do what they think the right thing, rather than blindly follow the recommendations of the masses to go" translation of the above comment in Mandarin
March 8, 2010 at 2:43 PM

buy dissertations said…
Even it took some time to me read all the opinions but I truly enjoyed and also got impressed by these posts
October 14, 2011 at 5:53 PM